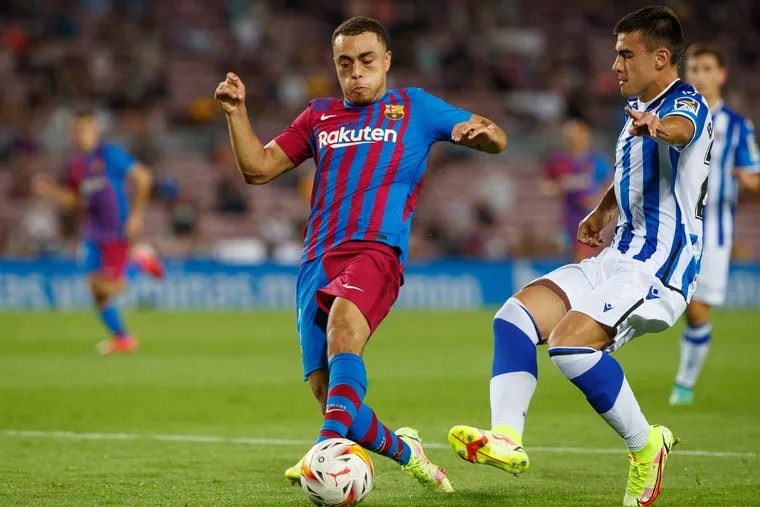 This weekend marks the final round of European club matches before World Cup qualifying resumes for the United States men’s national team. Two of the most prominent American players are based in Spain, Sergiño Dest from Barcelona and Yunus Musah from Valencia. To get a glimpse of how they fared, we reached out to ESPN football reporter Martin Ainstein.

Originally from Argentina, Ainstein lived in Miami for five years before moving to Madrid, where he has been since 2005. Ainstein appears on ESPN studio shows in Spanish and occasionally English, and is a sideline reporter for shows from ESPN on La Liga matches.

Additionally, as ESPN progresses through the first season of a whopping 8-year deal to broadcast La Liga in the United States, Ainstein is curating a video series called “The Bicycle Diaries” in which he cycles through Spain. to showcase the country’s culture, food and some of the football stars who call Spain home. They are posted on his Instagram account and occasionally on ESPN.com.

We spoke with Ainstein about Dest, Musah and what it was like to tell the stories of Spanish football to a new audience in America. This interview has been edited and condensed for length.

It’s a big question mark. Nobody knows. A lot of people at Barcelona right now say they want him out.

There are two reasons for this. The first is that [manager] Xavi doesn’t think he has the DNA a player in his position needs to have to play for Barcelona. It’s not that he is [not] good or he doesn’t play well, it’s because in this position it’s very difficult to play. Because you have to create a lot in the attacking part of the game, and Sergiño, his performance hasn’t worked well in that aspect.

The second is that Barcelona need to create money. They need money to recruit new players. So they are connected. If he is not a guy who is liked by the manager, and on the other hand they need to have money in their pockets to buy new players who are more like the profile Xavi wants, things are not going well for Sergiño.

And I believe he has to play in a World Cup year. It won’t be bad for him to go on loan to play regularly, have consistency and improve his game, as he is very young. And to regain some confidence that I think he lost after a few games where he didn’t play well. One of them is El Clásico [vs. Real Madrid last October].

I love it. Personally, he’s amazing – such a great guy, very relaxed. He likes to go to training. He likes what is happening with him.

I remember I interviewed him just before the Real Madrid game at Mestalla [Valencia’s stadium, last September], and he told me that his dream was to play against Real Madrid. Four or five minutes after the start of the match, [Carlos] Soler got injured, he had to intervene and he played pretty well.

He is very complete as a football player. A little, all the same, immature in terms of decision-making. But that’s normal, he’s very young.

And the same is happening in Barcelona, ​​Valencia are not so strongly facing so many problems off the pitch. They have an owner who does not want to invest. He devalues ​​the team by selling players but doing business [decisions] who are not good on the sporting side.

READ MORE: Yunus Musah was one of many European stars in the United States Men’s National Team’s World Cup qualifier win over Mexico

For Yunus, it’s great, because he faced the world. When you are in a team that plays well, you never play. So Yunus plays a lot, he finds his position, and the coach [José Bordalás] gives him a lot of freedom. He can play on the wing, he can move in the middle.

The only thing that [the manager] asks him to be very responsible on the tactical side. You can go in front, no problem, but you have to be in place defensively if you have a counterattack. For Yunus, this is not a problem. It’s a tiger. He’s fast, he’s strong, he has a lot of energy.

So for the moment that Valencia is going through at the moment, Yunus is a perfect footballer. That’s why he plays.

And that there is something that really struck me when I met him and saw him play. When you have a young player, he goes up front, he takes risks and he makes a mistake. Usually what happens with a person who doesn’t have a strong personality, they don’t do it anymore.

Yunus, he doesn’t care. He is very brave. He has a lot of character. He knows that if he makes a mistake, he should keep trying, not get frustrated or frozen by the mistake. He must keep doing it and learn from it, but not refrain from trying again. And I like that about him.

You know, in my career, the same thing always happened: when I had an obstacle, I tried to find an option. The newspapers I do and the trips I take by bike, they started from the [financial] 2008 crash, the real estate bubble in the USA

ESPN was going through a big crisis and this was my first chance to cover the Euros. And my boss called me and said, “You know what? We have no budget. You should go, but I don’t have any money to send you. And I said, “You know what, let me think, maybe we can find an alternative.”

So I said, “OK, you’re going to have the games. But there’s something going on in these tournaments – World Cups, Olympics, Euros – that goes beyond that, it’s how the fans come together. All the stories you find in the Alps, mountains in Austria and Switzerland [the cohosts of Euro 2008]. I know how to use a camera. I will learn to edit. It won’t be professional, but I will tell you stories every day across the Euro.

So it was the first time I realized that I could come up with ideas, surprise and bring something fresh and new.

“The Bicycle Diaries” also came from a big hurdle: COVID-19. We got the rights for La Liga, but the clubs weren’t giving any indoor interviews. And ESPN wanted to not only sell the games, but sell the experience of an amazing country. So I thought it was very interesting to connect the country and its stories with football.

And because of COVID, and because it’s a bike-friendly country, I said: bike. We place our character, our interviewee, in an astonishing scenario, a natural scenario: a mountain, a lake, a city, we can pilot a drone. We include so much more on-screen information than just a one-on-one interview.

And then we have social distancing. We do it outside. The bicycle is very positive as a means of transport. He has so many good things, you know? Then social distancing works, where we want to tell stories not just about football but about the country. So if we cycle, we show the country.

When we were cycling with Marcelino [García Toral, Athletic Bilbao’s manager], we were cycling in the mountains of the Basque Country. With Pau Gasol, we were cycling around the Camp Nou [Barcelona’s stadium]. It’s something you don’t see often, outside a stadium like that. Or ride a bike indoors.

It was very seductive. He packs a punch, he has a very powerful core and it’s also about sport. I mean, cycling is also a sport. So when we had this idea, we said, “This is what we have to do.

The idea is to give Spanish and English audiences the same stories, and to balance English and Spanish speakers. The problem is that we are in the country that speaks Spanish. …

It was a challenge, you know, trying to find people who speak English or personalizing the English versions with voiceovers and making them a little bit more chewable – that the story doesn’t require so much efforts on the part of the English- speaking spectator. …

I found it not only refreshing for me and my team, but also for the players. Héctor Bellerín, the former Arsenal player, he loved it. He said let’s go. With an interview, I would have had 30 minutes, no more than that. We cycled for three hours. …

I feel like people appreciate the way ESPN portrays La Liga. Because it’s a mix of American, European and Latin players who have played in the Premiership – for example [analysts] Pablo Zabaleta [ex-Manchester City] Where Luis Garcia [ex-Liverpool].

These Ivy League schools have the worst spellings