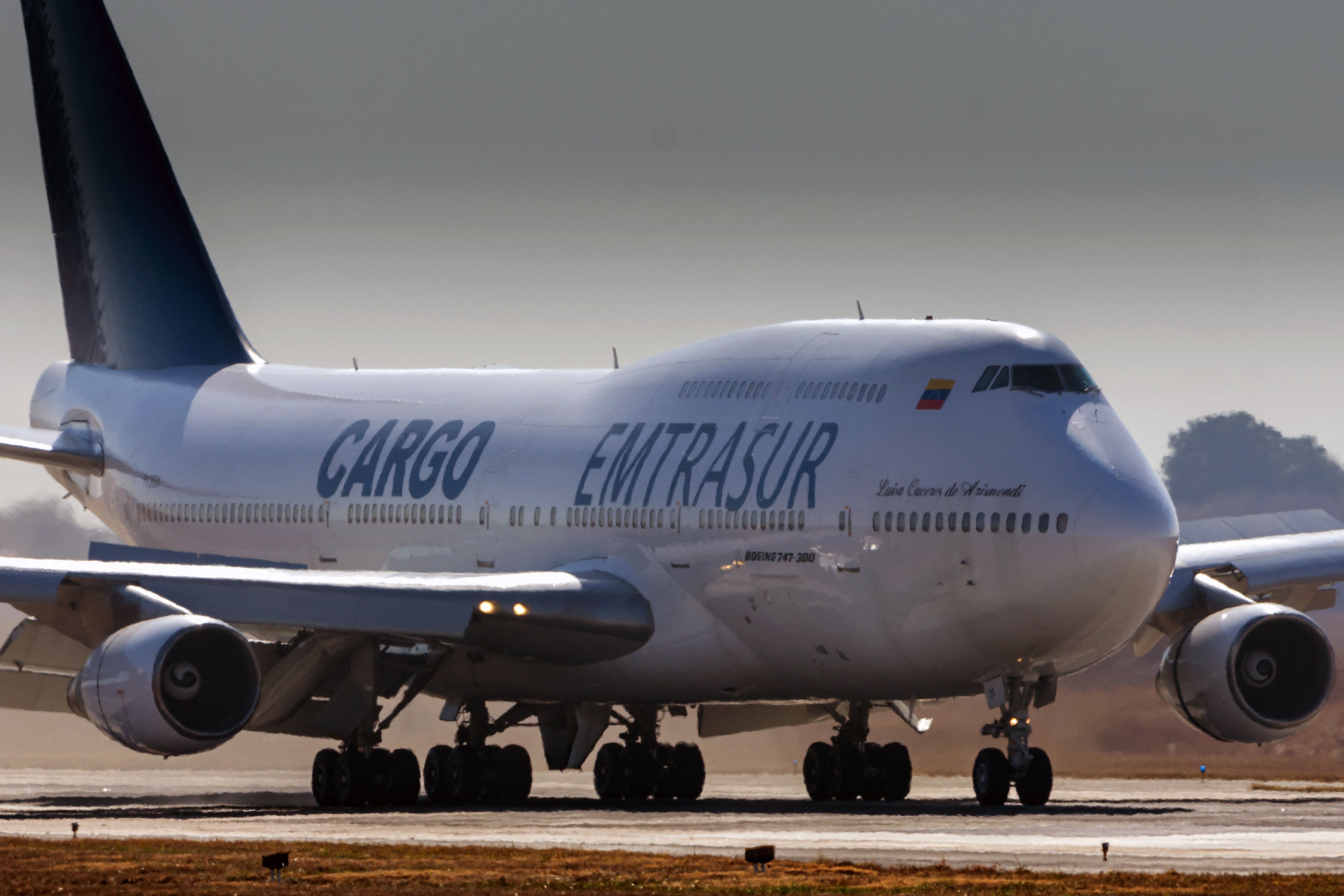 A Boeing 747-300M freighter belonging to Venezuela’s state-owned Empresa de Transporte Aéreocargo del Sur (EMTRASUR) is in the sights of the US Department of Justice (DOJ) after authorities in Argentina grounded the plane in June. As Argentina worries that those traveling on the jumbo jet have possible ties to terrorism, the DOJ wants the jumbo flown to the United States so it can confiscate it for violating US export control laws.

At the center of the dispute is a 36-year-old Boeing 747-300M freighter (registration YV3531) which landed at Ezeiza International Airport (EZE) in Buenos Aires on June 6 and was denied departure two days later. late. The jumbo is EMTRASUR’s only aircraft, and before heading there earlier this year, it flew for UTA, Air France and, more recently, Mahan Airlines.

There were 19 people on board the freighter when it landed in Argentina. What raised red flags were concerns that some of these people had ties to terrorist groups. The captain of the jumbo, Gholamreza Ghasemi, was quickly identified as a former commander of the Islamic Revolutionary Guard Corps (IRGC) and shareholder and board member of Iranian airline Qeshm Fars Air. The United States (and many other countries) have designated the IRGC’s Quds Force as a terrorist organization. Qeshm Fars Air is also in contact with countries around the world to provide material support to the IRGC Quds Force.

EMTRASUR has the only aircraft, now grounded, in its fleet. Photo: Getty Images

Argentina clings to the plane and part of the crew

An Argentinian court has since released 12 of the 19 people on board the plane, but is holding seven (including Captain Ghasemi) and the plane. The grounded group includes four Iranians and three Venezuelans.

While the Argentines conduct their investigation, the DOJ came out in force, sending an aircraft seizure warrant to Buenos Aires last month. The DOJ says the jumbo jet is subject to confiscation because it was transferred from Mahan Air without US approval and violates US export control laws. Mahan Air is an Iranian airline affiliated with the IRGC’s Quds Force and is also subject to various US orders.

“As alleged in the warrant of seizure, on or about October 2021, Mahan Air violated the temporary denial order and U.S. export control laws when it transferred custody and control of the aircraft. Boeing to EMTRASUR without permission from the U.S. government”, says a DOJ statement. “Additional violations of U.S. export control laws subsequently occurred between February and May 2022 when EMTRASUR re-exported the aircraft between Caracas, Venezuela; Tehran, Iran; and Moscow, Russia, without government authorization. American.”

The Boeing 747-300M on the ground in Buenos Aires in June. Photo: Getty Images

Because YV3531 was manufactured at Boeing’s Everett plant in the mid-1980s, it is an “American-made” product covered by these US laws. But Venezuela wants the plane back and Mahan Air denies any connection with its old plane. Unfortunately, a search for the aircraft after it landed in Buenos Aires turned up a Mahan Air flight log documenting the aircraft’s flights after its supposed transfer to EMTRASUR. The legalese coming from the DOJ is a bit of a distraction from the main show – concerns in many countries that the old 747-300 freighter was used for Iranian intelligence operations in the Americas.

Among the thefts documented in the seized logbook were an April trip to Tehran, a May flight to Paraguay to pick up cigarettes, and stopovers in Mexico and Venezuela before the ill-fated June flight to Buenos Aires. Authorities in multiple jurisdictions are currently investigating the aircraft and its activities.

The case was back in Argentine courts earlier this week. For the moment, Argentina has not acceded to the American request and the jumbo jet remains firmly on the ground at Ezeiza International Airport.