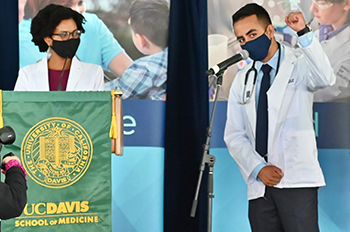 Alex Villegas worked as a physiotherapy aide for over a year after graduating from UC Davis, unsure of how to make the most of his hard-earned biology degree. Then one day his boss summoned him to the office.

The director was concerned that Villegas, who is very empathetic to patients and savvy about musculoskeletal health, might not be living up to his career potential. He wanted to know what Villegas saw himself doing in five years.

Villegas, unprepared for the question, blurted out that he was considering returning to school for physical therapy. But manager Edgar Villanueva had another vision: â€œI looked him straight in the eye and said, ‘you shouldn’t be a physiotherapist, you should be a doctor.’ ”

That conversation in 2017 propelled Villegas on a new journey – one that took him to UC Davis medical school where he began his classes this month as a first-year medical student.

His path to Sacramento has been unconventional.

Along the way, Villegas worked in construction, worked as a farm laborer, and was the first of his extended family of Mexican immigrants to complete high school. Lately, he has devoted some quality time to being with his father who is in palliative care for cancer. The experience reinforced her decision to study medicine.

â€œMy path to medical school has been anything but a straight line,â€ Villegas said. “At first I couldn’t believe I had been accepted, and I became very emotional, because of all the sacrifices my parents had made to get me to this point.”

Villegas, 28, was born in Modesto, the oldest of three boys. The family moved to Turlock, where the children spent the weekends using power tools with their father, a farm worker and a truck driver who supplemented his income by repairing houses.

“Work was my father’s way of showing me the value of what he calls’ganas, ‘or the desire to succeed,’ Villegas said.

Whenever Villegas envisioned his future, college was never in the picture, not even in a thought bubble. Her parents had interrupted their own seventh grade schooling in the rural Mexican state of MichoacÃ¡n, and no one in the family, including aunts, uncles and cousins, had ever attended college. 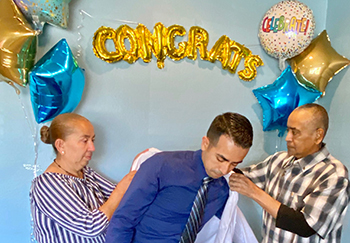 Villegas was a bookworm. His family called him el student, the studious.

TO Turlock High School, the teachers guided Villegas towards Greedy, short for Advancement Via Individual Determination, an academic organization that provides academic monitoring resources to students from diverse and under-represented demographic groups.

After his junior year, Villegas sought summer work at McDonalds and Taco Bell to earn money to pay for college admissions, but was turned down. Instead, he took a job as a farm laborer picking blueberries, onions and peppers.

His parents tried to dissuade him from working in agriculture. Deep down, however, he had a personal reason for wanting to work in the fields: â€œPart of me wanted to see the work my parents were doing, to know what they had been through.

On his first day in a Stanislaus County field, Villegas earned just $ 26 for a seven-hour shift. Labor paid for by the amount of crops he gathered instead of minimum wage.

He sympathized with his colleagues who suffered from medical problems related to pesticides, no health insurance, lack of transportation and low wages.

â€œAt the time, I didn’t know I wanted to be a doctor,â€ Villegas said, â€œbut I knew I had to do something for my community.â€

Deciding to Study at UC Davis

In his final year, Villegas received a generous scholarship from California State University, Stanislaus. He chose UC Davis rather for its solid reputation in science education. In doing so, he became the first student in Turlock High’s AVID program to attend a University of California school.

â€œMy path to medical school has been anything but a straight line. At first, I couldn’t believe that I had been accepted, and I became very emotional, because of all the sacrifices my parents had made to get me to this point.

Getting around 100 miles in Davis was bittersweet. He would pursue higher studies, yet far from his father, his model. Villegas apologized to his father for no longer being able to help with the construction work. He recalled how his father put his arm around him and said everything would be fine and encouraged his son to study hard, despite the distance between them.

â€œWhat my father told me that was close to my heart is that in order to continue to grow as a person, you have to take risks and step out of your comfort zone,â€ Villegas said. “Like when my parents came from Mexico.”

Villegas taught his parents to text, then left for college.

At UC Davis he took science courses and worked in research for Chicana / o Studies, investigate the needs of farm workers. On weekends he volunteered in the Knights Landing One Health Center, a student-run clinic that provides free health care in rural Yolo County.

At one point he thought about a career in medicine, but the goal seemed unattainable.

Villegas graduated in 2016, debt free, thanks to federal and state grants, and returned home. He accepted the post of entry-level physiotherapist assistant at the hospital where he was born, the Doctor’s Medical Center in Modesto.

He loved all aspects of patient care and didn’t really aspire to a higher career goal. But that heart-to-heart conversation with his manager motivated Villegas to realize the potential others saw in him.

“Ultimately my boss wanted everything I was happy with, whether it was physical therapy or medical school, but he always encouraged me to aim for the stars and not give up on my original aspirations.”

Eventually, he enrolled in the one-year post-baccalaureate program at UC Davis. The well-regarded program, rich in science curricula, also offers study advice and testing strategies for college graduates who wish to apply to medical school.

Subsequently, Villegas returned to Modesto and his work as a therapy aide, while studying for the medical school admission test. He played a leading role in MiMentor, an organization that helps students from diverse backgrounds to become health professionals.

Then tragedy struck the family: her father was diagnosed with liver cancer.

Alex Villegas with his father Joe Villegas, his model who is in palliative care with cancer

Villegas led his father from specialist to specialist while considering whether to go to medical school or wait until later. â€œI wanted to be with my family,â€ he said.

He discussed his dilemma with his parents. His father, as usual, encouraged Villegas to pursue his goals. And his supportive brothers have promised to look after their father. Villegas then decided to apply.

On December 15, 2020, Villegas received an unforgettable phone call from an unknown 916 number that flashed on his cell phone screen. It was Charlene Green, the director of admissions at UC Davis School of Medicine.

Villegas was one of almost 10,000 students who applied to the school. Suddenly he was one of only 132 to register.

â€œI just froze,â€ Villegas recalls of his conversation with Green. “I didn’t say anything for maybe 10 seconds, a good 15 seconds.” Villegas couldn’t believe he was accepted, but soon realized that it was a statement for his hard work. “I am worthy to be a medical student.”

Not only did he enter UC Davis Medical School and receive offers from other schools, Villegas was also accepted into a competitive academic stream. REACH (Reimagining Education to Advance Central California Health) tailors medical education for UC Davis students who wish to practice in Central Valley, one of the most underserved areas in the state.

“I look forward to Alex becoming a physician, returning to the Central Valley of California, and caring for a diverse and underserved patient population,” said Olivia campa, doctor in internal medicine and director of the post-baccalaureate program, where she was Villegas’ mentor. â€œI am so proud that Alex is on the right path to becoming an excellent physician and that he truly represents the values â€‹â€‹of our institution.

Last spring, Villegas heard about the upcoming medical school induction ceremony, an important event in which first-year students receive their white coats and stethoscopes. Villegas imagined his mother and father in the audience.

But her father’s health was deteriorating. â€œIt made me think if he could attend my white coat ceremony,â€ Villegas said. “This is something I really wanted to share with him.”

Villegas contacted Green and explained his situation to him. He asked if he could borrow a white lab coat to hold his own ceremony at home.

Green enlisted other medical school and faculty staff and sent Villegas a box containing a white coat. The school also sent personalized video greetings from key faculty members, in English and Spanish, which allowed Villegas to hold his own ceremony with his father at the end of May. “It was a very emotional moment for me,” recalls Villegas, whose girlfriend filmed the ceremony.

It was perhaps even more special for his father.

“I am so proud because he accomplished all of this despite the hardships we went through,” said his father, Joe Villegas. “He gave a lot of ganas, a lot of ganasrepeated the father, to emphasize. “We were so happy to put the white coat on her.”

As it turned out, the school’s induction was an in-person event for students only; families have had to watch from home because of the pandemic.

That morning, July 31, Villegas took the stage, received his stethoscope from Associate Dean for Students Sharad Jain, and walked over to the microphone to address his family who were watching via Facebook.

With folded hands, he said in Spanish: “I want to thank my parents for all their support, my brothers and my partner, and all my mentors who have supported and guided me throughout this journey.” He then looked at the audience and proclaimed: “Come on Ags!” and raised his left fist in the air.

After the ceremony, Villegas traveled to Turlock to celebrate with his father and the rest of the family.

Education matters: the bilingual program is personal for this local teacher