The Costa Verde Express: all aboard the new Spanish luxury train | Travel

OOur train departs from Oviedo station and dinner service begins. Passengers in evening dress leave their cabins for a dining car full of polished brass and dark wood. Waiters in immaculate uniforms glide between linen-covered tables laying out delicate dishes of salt cod and tender veal. A passenger from Versailles orders “more champagneAnother, a model from Buenos Aires, evokes the great Milanese fashion houses. Our train rolls aristocratically under the twilight sierras of Asturias. It carries the freight of end-of-the-century fantasies: reveries of top hats, and Belgian bloodhounds with twirling mustaches.

We pass the El Berron station, where four teenagers are standing on the platform. They wave to us. . . then drop them off pants. Eight ass cheeks moon triumphantly before the bourgeois ensemble parading. Someone sputters in their champagne. Not the classic crime you expect on a train like this. But maybe, in a way, it says something about the territory that the Costa Verde Express passes through – wild, earthy and full of the capacity to surprise.

The Costa Verde Express is a new luxury train that travels along Spain’s northern coast (well, almost new; it’s a rebooted version of El Transcantabrico, which has been around since the 1980s). Over the course of six days, it runs through a network of narrow-gauge, mostly single-track railways; small local lines that seem curiously absent from rail maps. These little tracks weave their way furtively through the landscape, enter vegetable gardens, deliberately skirt sandy beaches, disappear into narrow tunnels with the mischievousness of a fairground ghost train. Most of the time, the network is punctuated by monotonous local services. Once a week, however, the Costa Verde Express struts its way, elbowing past freight cars on its some 400-mile odyssey along the coast. Once or twice a day it pulls up and passengers are transferred to a dedicated tourist bus to enjoy tapas – literally and metaphorically – on the riches of Galicia, Asturias, Cantabria and the Basque Country.

My Costa Verde Express trip started in Santiago de Compostela in Galicia. There’s no better place in Christendom for people-watching than the Praza do Obradoiro: the finish line for pilgrims who have traveled 800 kilometers or more to the relics of St. James. The atmosphere is like a cup match in the minutes following the final whistle: the hikers who arrive applaud, sob and kiss under an avalanche of emotions. A reverential silence reigns in the medieval cathedral as pilgrims walk with blistered feet under the gilded altar. Conventional wisdom sees Santiago as the place where travel ends rather than begins. But then our journey could usefully be seen as an inverted pilgrimage; away from heavenly salvation and toward the earthly indulgences of fine wine, fancy dinners, and afternoon siestas spent snoring to the sound of the rails. 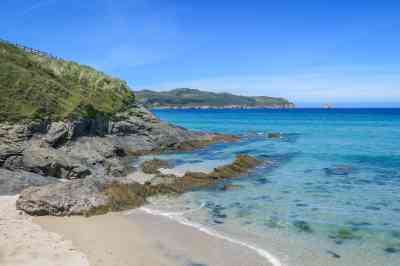 At Ferrol, we are shown to our comfortable cabins and the Costa Verde Express rolls east. The Costa in question soon appears; we pass stone harbors where fishermen pile up lobster pots, and estuaries where I see silvery fish fluttering under bridges. Further on, the stormy swell of the Bay of Biscay beats down on the capes; lighthouses stand sentinel at the edge of the continent. By the way, the “Express” part of the name is an outright lie. The train doesn’t travel much faster than a golf buggy, taking nearly a week to cover the distance a Japanese bullet train could cover in two hours.

But the most memorable part of this trip is the “Verde”. We cross landscapes of a lively and dilating greenness: the luminous and electric hue of parakeet feathers. Contrary to popular belief, the rain in Spain falls mainly on the north coast: things are growing at a breakneck pace. On some stretches, the motor plows through overgrown vegetation, like a jungle explorer wielding a machete. Once, while I was brushing my teeth, a cut sheet slipped through the open bathroom window. And sometimes, when sudden downpours follow bright sunshine, you can almost feel all that greenery growing in real time, like bread rising in an oven.

“Here, everything is green,” says my travel companion Julio, pointing out the window at mossy ravines. “At the moment everyone in the south of Spain is burning, but we are looking into this. Even the train curtains are green. The train running through a tunnel at the water’s edge

The corridors of the Costa Verde Express are narrow, so it is inevitable to be on good terms with other passengers. Most come from Spain or Latin America; the on-board library contains volumes of Cervantes and tango pieces in the bar car. British passengers are rare. Julio is from Argentina: he originally planned a road trip to northern Spain, but decided to take the train so he wouldn’t have to look at the tarmac.

“On a train, you just have to sit down and watch. It’s a way of letting go. »

Life stories are shared. Over coffee, I chat with Manuela from Madrid. She explains to me that she married into a family of matadors: a brother-in-law was mortally gored in the ring. Above his fireplace at home are two bullheads: powerful toros killed by his stepfather over 100 years ago. Bullfighting is a southern tradition – of dust, blood and hellish heat, a world away from this cool northern paradise.

“Each region we cross has its own food, its own dress, and even its own language,” says Manuela. “Everywhere is distinct, and that makes me happy.”

This proves it: Galicia is the Celtic heart of Spain. Bagpipe notes can be heard in Viveiro, a small port where the balconies of townhouses are designed like the captain’s cabin of a sailboat. “We’re Atlantic people,” a local tells me. “Closer to the Irish than the Andalusians.” As a result, the train’s loudspeaker played Enya songs as we feasted on Galician octopus in the dining car that evening.

Then we cross the border into Asturias and an alpine culture prevails: there are meadows of wildflowers and ringing cowbells reminiscent of the Von Trapps, and abandoned farmhouses whose slate roofs have disappeared, chipping away like a stone. oyster by Atlantic winds. This is the most beautiful part of the route: sit on the left and you will see orchards, old granaries partly built of whalebone and beaches veiled in salt spray. To the right, the karst mountains of the Picos de Europa gather like crashing waves.

“In Asturias, we’re in the sandwich between the mountains and the sea,” says Noelia, our guide in the port of Aviles (and the first person I saw wearing boots in June in Spain). “The weather changes quickly. Every time you leave the house, you should bring sunglasses and an umbrella. 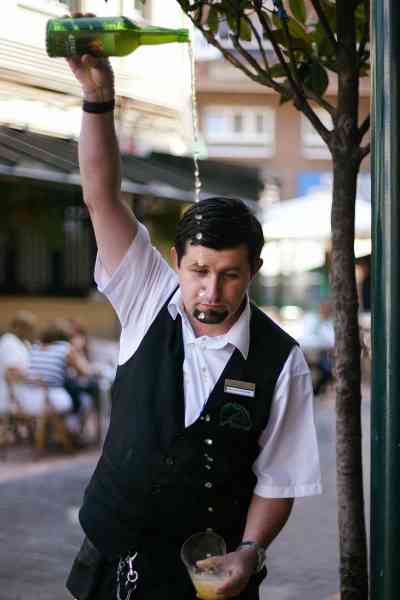 Aviles is typical of many towns on the road: a post-industrial crust of factories leads into the heart of a very beautiful old town. Storm clouds glisten as we walk among the mansions built by Spanish merchants returning from the Americas: then the ocean wind sweeps across the blue sky and the cobblestones shimmer again. All these excursions outside the train follow a free formula: aperitif discovery of Romanesque churches, amuse-bouche of squares and bishoprics. Inevitably, all of this leads to food and alcohol. In Asturias, that means fabada stews, cheeses and especially golden cider. Outside a local bar, Noelia shows me the art of pouring it, holding the glass at waist level while waving the bottle as high as she can to create Yosemite Falls of sparkling, sparkling cider. I miss my drink dramatically. Cider runs down my shoes. Most slap on the sidewalk like falling rain.

By the time we reach Cantabria, passengers have settled into the rhythms of life on board. Sleeping in sidings at night while frogs cavort outside; savoring the snobbish thrill of smoked salmon breakfasts while commuters look on sullenly. Although our cars are a little over 20 years old, they evoke the halcyon days of the golden age of travel. It’s a time no one is old enough to remember (it exists perhaps most powerfully in daydreams), but we’re willing accomplices in its imagination: civilization distilled into a seven-foot-wide space. The Costa Verde Express makes its final stop at Bilbao-Concordia station. The passengers spin in the direction of the Guggenheim museum and, just like the teenagers of El Berron, the charm of this golden age is broken. Or almost broken. I glance over my shoulder at the facade of the station – a Belle Époque masterpiece of wrought iron, with heraldry carved in stone. Rumor suggests it should become redundant, with all trains moving to a nearby modern terminus. Its long-term future is uncertain. Today, despite a faint smell of dog pee and part graffiti, Concordia stands resplendent in its sunset years. Its Corinthian columns recall a temple of Zeus. Its arches seem ecclesiastical: a portal to a greater place. I wonder if the architect who put it here – in the homeland of the Camino de Santiago – also saw something sacred in this kind of journey.

Oliver Smith was a guest of Wexas Travel, which offers a seven-night trip from £4,345 pp, including flights, excursions, five nights full board on the Costa Verde Express and one night each in Santiago -de-Compostelle and Bilbao, both B&B. . A trip to Spain by ferry can also be arranged (wexas.com)

Online schooling is the bad idea that refuses to die