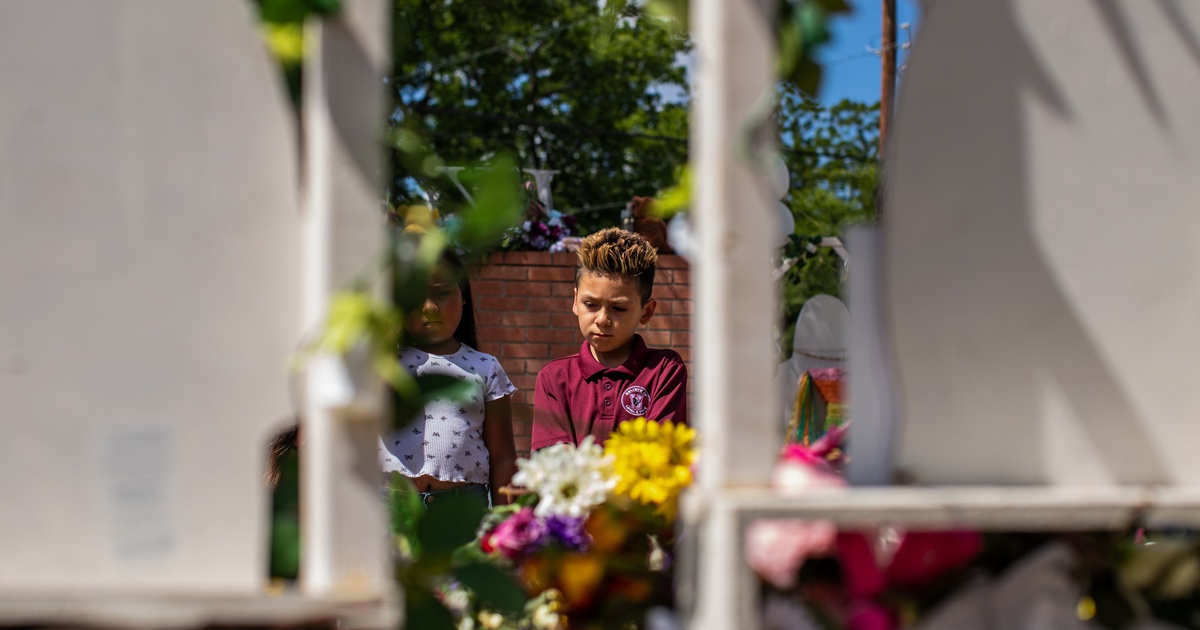 Sign up for The Brief, our daily newsletter that keeps readers up to date with the most essential news from Texas.

For 24/7 mental health support, in English or Spanish, call the Substance Abuse and Mental Health Services Administration’s toll-free hotline at 800-662-4357. You can also contact a trained crisis counselor through the National Suicide Prevention Lifeline by calling 800-273-8255 or texting 741741.

UVALDE — Eight days after surviving the shooting at Robb Elementary, 9-year-old Zayin Zuniga returned to the school grounds to visit the memorial of his slain classmates.

Zayin and his mother approached one of 21 crosses placed on the school lawn to honor each of the victims killed last week: that of 9-year-old Eliahna Amyah Garcia, whom Zayin called Ellie. After a school dance at Robb, Zayin decided he wanted to give Ellie a present. He begged his mother to get him a ring that he could give her. He could never do it.

Zayin was in room 111 during the shooting, one of two communal classrooms where the shooter holed up. He remembers smashing glass and seeing bullet casings on the classroom floor as he and other students hid behind his teacher’s desk. Zayin and other children were able to escape through a window.

“Everyone was scared,” he said.

Zayin often pulls back to hug his mother as he recalls the scene. He can’t hear loud noises without thinking it’s the sound of another gunman trying to hurt people, said his mother, Mariah Zuniga.

The Zuniga family suffered no injuries or deaths that day, but unseen wounds remain in the form of trauma. Zayin doesn’t feel safe returning to Robb and isn’t ready to go back to school in general. Research and studies suggest that child survivors will feel anxious after a shooting, but talking to them about it and making them feel safe is necessary to help them heal.

Research and experts have also found that if there are insufficient mental health resources for survivors, witnesses and the community, trauma can impact education and lead to absences, declines grades and students who choose not to go to university.

Zayin and his family were on Wednesday at the Uvalde County Fairplex, an event center and indoor arena where organizations provide counseling and mental health services to families and students affected by the shooting.

Zuniga said her son would need a professional therapist to talk about the tragedy. When she first told Zayin about her feelings after what happened last week, he burst into tears.

“I went to counseling because I didn’t really know what to say to him after something like that,” she said.

Look for ways to heal

Marcos Guzman, 12, who graduated from Robb Elementary last year, said he knew some of the children and teachers who were killed last week. He does not understand the senseless acts that caused the death of his peers, especially Uvalde.

As Uvalde mourns, local, state and federal authorities are also looking for ways to help the community heal.

Texas Health and Human Services is overseeing the state’s response to the crisis in Uvalde, and therapists offered help immediately after the shooting. But services will also be needed much longer to address its lasting emotional effects on child survivors and grieving families, said Dr. Steven R. Pliszka, chair of psychiatry and behavioral sciences at UT Health San Antonio and program administrator. .

“At some point we will have to move from this acute response to working with people for the long term,” Pliszka said. “Once the acute situation subsides, that’s usually when people realize they really need to come back for help.”

A state-funded youth telehealth program provides services to the Uvalde Consolidated Independent School District to help identify students and families in mental or emotional crisis and provide them with counseling or therapy services to which they are not might not have access otherwise, Pliszka said.

The Texas Child Health Access Through Telemedicine program channels resources and expertise to a network of doctors, counselors and other professionals at universities in 12 regions across the state to respond to children identified in schools as showing signs of distress.

“I contacted the superintendent, and if they wish to respond, we can certainly enroll them immediately. There are no barriers,” Pliszka said.

Some officials have suggested that Robb Elementary should not be a reminder of the shooting and have proposed that the school be torn down and replaced with a new building.

State Sen. Roland Gutierrez, D-San Antonio, told San Antonio broadcaster KSAT there was hope the federal government would provide a grant to rebuild the school. He said President Joe Biden, who visited Uvalde on Sunday, told him, “We’re going to look to raze this school and build a new one.”

“I can’t tell you how many little kids I’ve talked to don’t want to go back to that building. They are just traumatized. They are just destroyed,” Gutierrez told KSAT.

Uvalde Mayor Don McLaughlin said he believes the same should be done.

“I don’t think anyone’s plans are to tear this building down,” McLaughlin told KXAS-TV. “I would never ask, I would expect a child to ever have to walk through those doors, ever again. This building must go.

The school district superintendent announced Wednesday that students and teachers will not return to Robb in the fall and will instead move to other campuses.

Generations of Uvalde residents have gone to Robb Elementary, which has served the community since 1955 and has been the site of tremendous progress for the predominantly Latino town of about 15,000 people. In the 1970s, Mexican American families staged a strike to make school more inclusive.

The school has sentimental value for many townspeople, but that shouldn’t stop authorities from demolishing and building a new school, said Dolores Contreras, 77, a resident of Uvalde.

Contreras said she went to see Robb as a child, along with some of her siblings. His children and grandchildren also attended school. But now, helping the community heal should be the priority.

“It should drop,” she said. “Children don’t feel safe.”

Other schools across the country have been demolished after mass shootings. Santa Fe High School near Houston; Marjory Stoneman Douglas High School in Parkland, Florida; and Sandy Hook Elementary in Newtown, Connecticut, renovated or constructed new buildings with features such as bulletproof walls and windows.

Zayin and his mother also don’t want to go back to Robb. Zuniga, who moved to Uvalde a year ago, said they had a lot to think about before deciding where Zayin would pursue his studies.

“None of my kids want to go back,” she said. “It’s so scary to think of something like this happening again.”

Fears that won’t go away easily

The road to recovery will be long for the students who survived the shooting and for their parents.

Zuniga said it will be hard to forget the fear she felt when she first learned there was an active shooter at her children’s school. She couldn’t understand what was happening. She was in San Antonio when she first received a text about the incident and ran to make the nearly 80-mile journey to school.

Zuniga has another child who goes to Robb. She was in the cafeteria and was able to get to a safe house quickly. She didn’t know that Zayin had been in one of the classrooms attacked by the shooter until they reunited.

“To be able to see them again is like you’re so thankful and thankful,” she said. “And you don’t want to take that for granted because there are other families who can’t see their kids anymore.”

Wherever her children go to school next, Zuniga said she will carefully review its safety protocols. The family could move elsewhere. She is even considering home schooling. All options are on the table.

“I don’t know if we’ll end up moving. We just moved here,” she said.

For the first two nights after the shooting, Zayin stayed with his mother in his room. They really couldn’t sleep. Events would still play out in her head, she said. They were taking melatonin to try to rest.

The two of them visited Robb’s memorial on Wednesday to begin the healing process. Zuniga finally got the ring he wanted to give to Ellie from Zayin and placed it on his memorial.

He now wears a matching one to always remember her.

Green Dragons have had a remarkable turnaround | News, Sports, Jobs