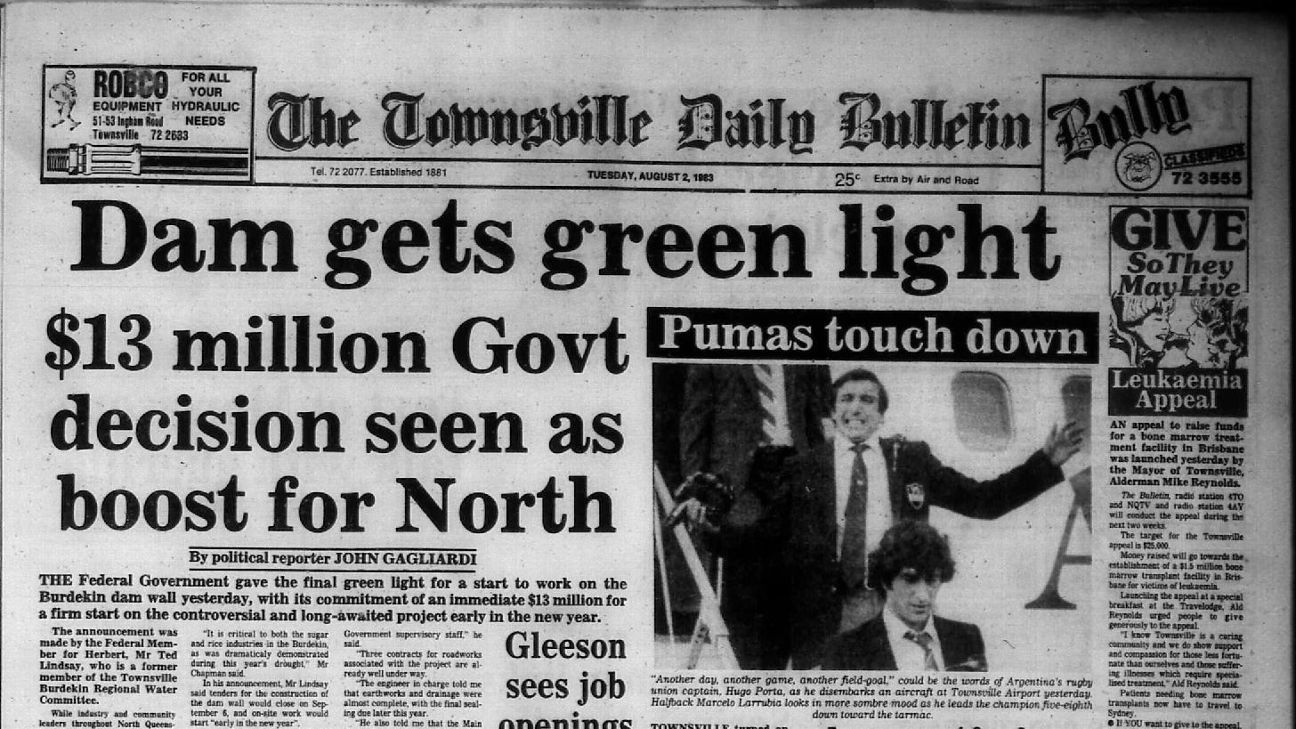 Recalling and rewriting the history of a game played 38 years ago can become a very complicated task. Before the world became hypercommunicated thanks to the Internet, and 1983 is long before, there was nothing quite like the glut of texts, photos and videos which is common practice today.

And sometimes all the available evidence, even supported by memory and testimony, may not be sufficient or consistent. This is exactly what happens when trying to track Los Pumas’ 22-12 victory over Queensland Country, in a match played on August 3, 1983, as part of the Argentina National Team Tour. in Australia.

Pumas have made history on this tour for a variety of reasons. For starters, because they scored what was, in decades, their most resounding away victory, an 18-3 over the Wallabies in the first test.

During the tour, the Argentine scrum became famous all over the world. The “Bajadita” (Going Down / Sinking) technique, a coordinated push with all eight forwards engaging from a very low position, put the Wallabies in serious trouble. Australian rugby quickly learned the lesson and ended up securing the services of Argentinian pillar Enrique “Topo” Rodriguez, who then became wallaby and played RWC 1987.

Last but not least, he definitely placed Hugo Porta among the best half-flies in the world. Porta had already played a leading role in scoring all the points when Sudamerica XV, with 15 Argentinian players, beat the Springboks 21-12 in 1982.

As Argentina is about to return to Townsville, Scrum.com in Spanish has contacted Paul Radford, who is married to an Argentinian.

Paul, a former rugby player, was born in Townsville, still lives in the city, made it to the 1983 game and plans to attend Saturday’s double-header wearing a Patricio Noriega jersey, donned by Pato in 1995, during another Pumas-Wallabies clash. Yes, Noriega, another Argentinian accessory who later became Wallaby.

The original idea was to get a few quotes from him and understand what the atmosphere was like in Townsville in 1983. But Paul, a lawyer by profession and passionate about the game, displayed incredible talents as a journalist, amassed valuable material and contacted all those who matter in order to piece together, as fully as possible, the history of the 1983 Pumas-QC clash.

As with Bajadita, the concerted effort produced excellent results and most of the inconsistencies have been resolved. But at the same time, the exercise of collective memory turned out to be a very subjective process, selecting and magnifying certain details.

Among the many voices that helped rebuild history, one stands out: that of Col Harkness, who started the game in Townsville in the 1970s and, at the time of the QC-Argentina game, was chairman of the organizing committee. Townsville and Districts Rugby Union (TDRU).

â€œThe game was a big deal for Townsville and I remember Hugh Street, which is still the home of Townsville rugby, was packed, around 6,000,â€ said the colonel. “Argentina had just beaten the Wallabies in Brisbane so Country knew they were going to play a tough game.”

He adds that at least three local players have been selected to start: Terry Shields (prop), Jeff Dillon (inside) and Murray Smee (back).

Jeff Dillon has very similar memories of how important this event was to the city.


â€œThe game was eagerly awaited by the Townsville crowd,â€ he said. “The All Blacks had played here a few years before, but it was unusual for a regional center to have a national team playing.”

Jeff recalls: â€œThere were contingents of locals meeting the team at the airport, Argentinian music playing in the streets, and a great curiosity, because we knew very little about the countries of South America at that time. .

He even remembers that many articles were published, one of which â€œcompared the Australian breeder to the famous Argentine gauchosâ€, a very relevant comparison given that both Queensland and the Argentinian Pampas are well known for the quality of their fish. beef cattle.

National teams don’t visit regions so often now, which is why Paul is really enjoying these days. â€œThe situation we have this coming weekend is absolutely unique, with the four powers of the southern hemisphere all playing Townsville one night. This week I got to see South Africa training at the Sports Reserve from my house, which was a bit unrealâ€¦ “

Paul then takes a nostalgic turn and regrets the good old days of touring teams.

“The Pumas, All Blacks and British Lions were some of the teams that visited the region; we got to see them training and then we got to see them playing in the evening, learning a lot from them,” recalls- he. “The local rugby players had the chance to play against the best and mingle with them later, it was great and it inspired a fantastic culture – lifelong friendships were formed.”

Col Harkness tells a story that embodies this spirit, recalling a very curious dinner at his home.

â€œThe day before the match, my wife Eva and I hosted, among others, Argentine Rugby Union president and coach Rodolfo O’Reilly for dinner. I remember late at night persuading O’Reilly to show us how their new scrum worked then., and that meant we all had scrums in the kitchen! “

â€œBajaditaâ€ was a hot topic of conversation, especially after being the Pumas’ key weapon to get the first test in Brisbane. Col remembers how shocked everyone was with the technique: “It was something we had never seen before, scrums placed so low to the ground and the big shove.”

From TDRURA, the Association of Arbitrators, Paul Martinez brings his contribution. Paul’s father was actually born in Argentina, Patagonia.

“The Pumas had the strongest scrum in the world at the time. They were the first team to be awarded a scrum penalty try, when Australia dropped the scrum in reverse at 5 km / h. he says, but adds rather ironically: “Our response, Australian citizenship for one of their props, Enrique Rodriguez, the following year.”

Four days later, Queensland Country knew what they were up to, and everyone agrees they did a good job neutralizing “Bajadita”.

But Jeff Dillon says that didn’t stop the Pumas field from imposing their conditions: â€œThey were renowned for their scrum techniques, and it was certainly obvious as they slowly overwhelmed our smaller, but brave field. “

If the Argentine scrum was not so dominant, and if QC scored three tries against just one by Argentina, then there is an obvious question to be asked: How and why did the Pumas win the game?

There is a first attempt to provide an explanation on the front page of the Townsville Daily Bulletin, shared by Queensland Country writer and coach Andy Purcell: One bad kick let us down, with 0 of 5 attempts.

But that reason is quickly dismissed by each of our sources: yes, it was about kicking, but because of Porta’s magic right boot.

Argentina scored 22 points that night, including 18 from Porta: five penalties and a huge basket. The solo test, worth four points, was scored by half-back Marcelo Larrubia, who died in 2019.

In fact, it’s probably such a dominant display from Porta that explains some of the deviations from what’s on record. Like giving him a touchdown that he didn’t score, or a memory shared by several of those interviewed: that he was on the bench and that he came in with only 20 minutes to play, to score the 22 points and heroically winning a match that seemed doomed to fail.

If the written records are to be believed, Argentina were down 8-0 in the opening minutes but led 13-8 at halftime, so they never looked back. The score then fell to 19-8, 19-12 and 22-12 with Porta’s last penalty of the evening.

If this is the right progression, then Porta was not a savior, but a starter and captain of the team, as the same newspaper reported the day before.

There could be doubts because, had he actually started on Wednesday night, he would have played three full games in just one week, something impossible in rugby today, but common practice almost four decades ago. The point is that he was not the only one, if the records are correct: Marcelo Loffreda, Gustavo Milano, Eliseo Branca and “Topo” RodrÃ­guez did exactly the same.

The five of them played the first test on a Saturday, started against Queensland Country on Wednesday and lined up again the following Saturday, when Australia took their revenge, winning 29-13 in Sydney.

As said above: when a player takes center stage in this way, it impacts the memories, and when these are passed on through word of mouth, they end up taking another form.

Jeff Dillon, for example, still remembers Porta’s placement in the second half. And Paul Martinez adds a story only a referee could catch.

“One of the QC’s breakaways had obviously been given instructions to help remind Porta that he had been in a game in The Deep North,” he recalls. “Porta absorbed all the tackles that were a little late, slightly high, slightly in the air after his multitude of kicks … No penalties, it was the fashion at the time.”

But at the end of the second half, Porta decided he had had enough. So said to Martinez: â€œThe kick had landed, the play continued and the breakaway came on Porta’s blind side – again, no whistle. Porta continued that breakaway for half a minute, far from any game, it got a little funny at the end. The breakaway ended up burying itself in a maul. Porta spread the word – I never saw him again within 10m of the Puma # 10 “.

Paul, then a teenager, apologizes for a few hazy memories, but summed up perfectly: “We were in front, then Hugo started kicking points.”

Colonel Harkness also sums it up in very few words: “Hugo took the game from us. If he was not so well known here before, he certainly made a name for himself afterwards.”

Greg Thorne, now a lawyer but then a promising rugby player, missed the match due to injury. And has very similar memories: “The game was dominated by Hugo Porta, who kept throwing points from all angles and all the way – you don’t forget something like that.”

Jeff Dillon felt privileged after the game: “It was played in a good mood and there was great camaraderie once it was over. As was tradition, the players exchanged jerseys, and I was lucky enough to receive jersey number 10, which I really appreciated “.

The memories are intact after 38 years. Incomplete and subjective, of course, but with the intensity of the experiences that shape individuals and teams alike.

As will almost certainly happen on Saturday, when Townsville experiences another historic day, one that marks a city and its collective memory.