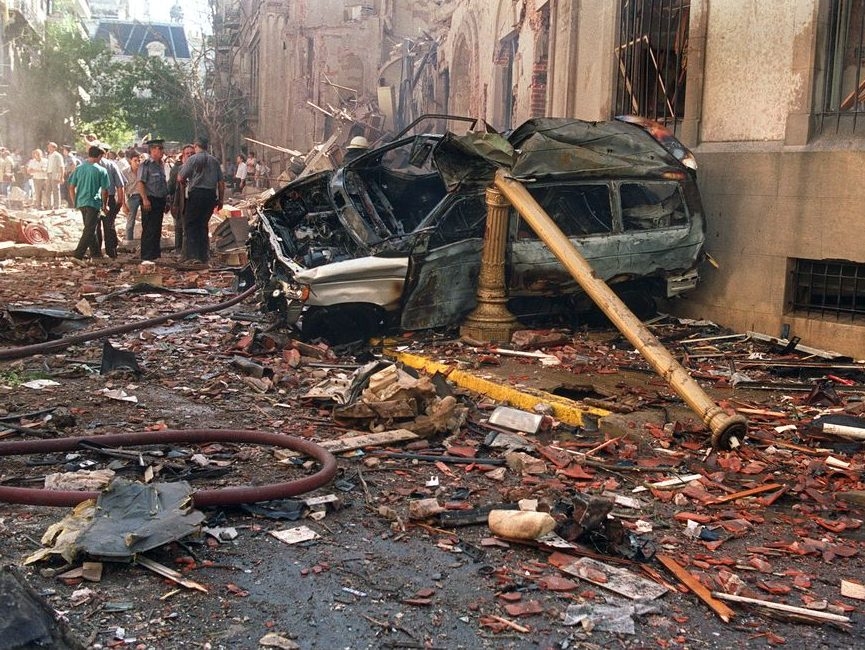 SLOBINSKY: Thirty years after the attack on an Israeli embassy

Thirty years later, I can still feel the dark dusty cloud descending on me. I remember the precise moment when I learned of the attack on the Israeli embassy in Buenos Aires which claimed the lives of 29 innocent people and injured 242 others. At that point, as a Jew, I knew I was no longer safe in the place my family had called home for four generations. Thirty years later, there is still no accountability for this atrocity, one that will never fade from my mind.

March 17 marks the 30th anniversary of the suicide bombing at the Israeli embassy in Buenos Aires, Argentina, where a powerful explosive destroyed the building, killing 29 people. Among those murdered were three Israeli embassy staff, six local embassy employees and innocent Argentines, including elderly residents of a nearby nursing home and schoolchildren on a passing bus.

Hezbollah, a Lebanese terrorist organization, claimed responsibility for both attacks. Yet despite years of Argentine investigations showing Hezbollah’s culpability and Israeli investigations showing the Iranian regime’s role in authorizing the Hezbollah attack, none of the perpetrators have been brought to justice. Argentina’s Jewish community – the largest in Latin America and more than 230,000 strong – remains abandoned by the global community in its efforts to seek justice for its victims.

We apologize, but this video failed to load.

As my heart continues to ache for my community, it is important to recognize that we cannot simply acknowledge these epic failures as a thing of the past. Rather, we must adopt measures to prevent these perpetrators from promoting terror in the future, ensuring that justice is effectively served for the victims of these bombings and all those who followed them.

Supported primarily by Iran, Hezbollah remains a violent terrorist organization committed to the destruction of Israel. Hezbollah and a specific unit of Iran’s Islamic Revolutionary Guard Corps (IRGC), the Quds Force, are listed as terrorist organizations by the Government of Canada, with the IRGC’s Quds Force designated as supplying “weapons, funding and paramilitary training to extremist groups, including the Taliban, Lebanese Hezbollah, Hamas, Palestinian Islamic Jihad (PIJ) and the Popular Front for the Liberation of Palestine-General Command (PFLP-GC)”.

Yet the Iranian regime’s entire IRGC military, which unquestionably plays a role in the global terrorist regime, remains outside the bounds of Canadian criminal law.

Recognizing this, in 2018 the House of Commons – with all-party support – approved a motion to immediately list the IRGC as a terrorist organization. In addition, the Criminal Code of Canada clearly states that a terrorist group is “an entity one of whose purposes or activities is to facilitate or carry out a terrorist activity” or is a “listed entity and includes an association of such entities”. Either of these facts should be enough in Canada to label the IRGC a terrorist entity and thus hold the regime accountable for its human rights atrocities.

While the pain will never end and the wounds will never fully heal, marking 30 years since this horrific terrorist attack must serve as a call to action to ensure justice for the victims, the honor of their memory and the recognition of the efforts of all those who have risked their own lives to save others. Together, we must uphold the fundamental principle of the Torah, “Justice, justice you shall pursue” by holding perpetrators accountable and, once and for all, ending the culture of impunity.

Nico Slobinsky is Senior Director, Pacific Region, at the Center for Israel and Jewish Affairs.

From our newsroom to your noon inbox, the latest headlines, stories, opinions and photos from the Toronto Sun.

Thank you for your registration!

A welcome email is on its way. If you don’t see it, please check your spam folder.

The next issue of Your Midday Sun will soon be in your inbox.

We encountered a problem during your registration. Try Again

We know how to close the success gap