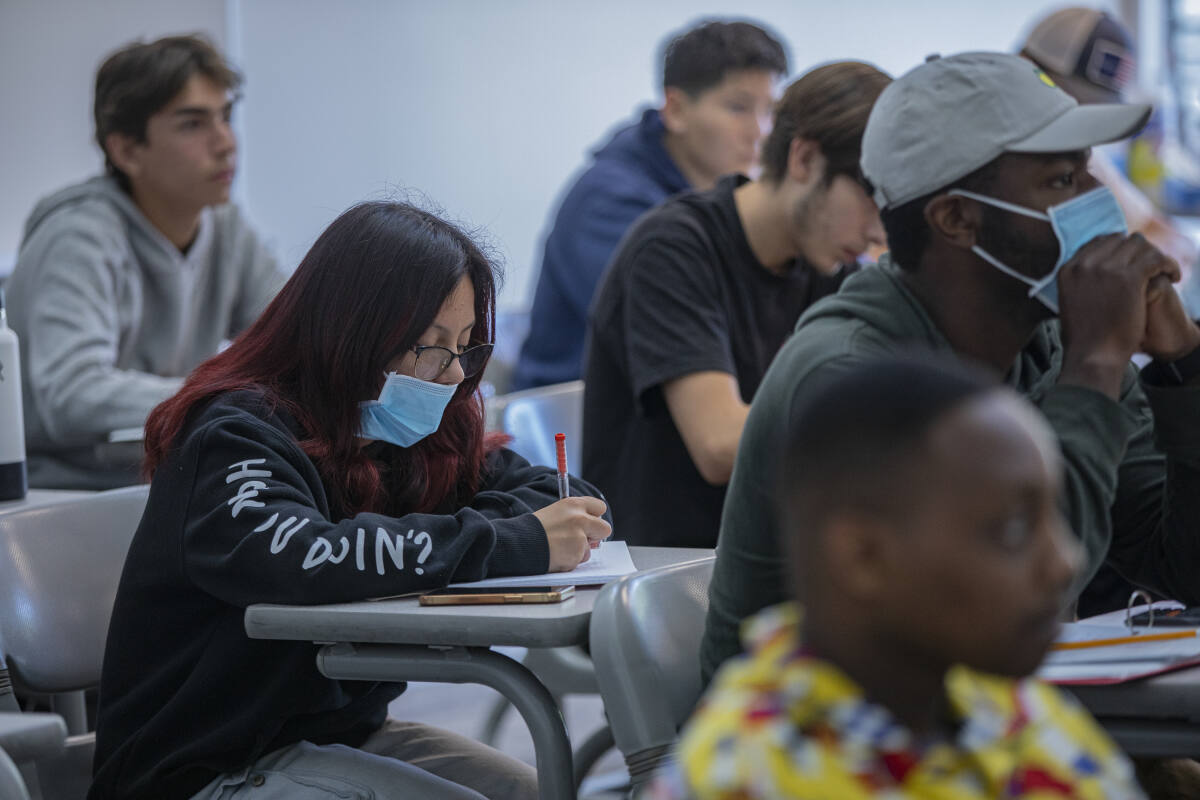 Many students aren’t ready for college-level math right away, Melvin said. Requiring them to take a college-level course within a year of enrolling could have unintended consequences, he said.

Grace Gideon, 33, failed to pass a transfer level class within a year of enrolling in college in 2013. When she started, she had a son in kindergarten and hadn’t been to school for seven years, so she enrolled in a pre-algebra class.

She didn’t pass her first college-level math course until five years later. According to the metric used in the research feeding the AB 1705 push, Gideon’s path would not have been considered successful.

But this spring, nine years later, she graduated from junior college with five associate degrees and was an early lecturer. She is heading to the University of California at Berkeley where she hopes to study quantum mechanics.

Before taking pre-algebra classes in college, Gideon thought she didn’t like math. Everything changed in her remedial class, she said.

“I completely fell in love with math and changed my major,” she said. “When I walked into math class, I felt very safe and structured, giving me that stability and a place where I could actually solve problems.”

Proponents of remedial courses point out that the California high school graduation requirement for math only reaches Algebra I. That’s several levels below college-level math, which begins at pre-calculus or statistics, both of which require an understanding of the concepts covered in Algebra II. .

As a result, a high school graduate may enter community college without having taken the courses that would prepare him for college-level mathematics.

Those in favor of dropping remedial classes point to the increased offering of college prep classes in some of Sonoma County’s school districts, including schools in the city of Santa Rosa. . The math course sequence that meets the admission criteria for the University of California and California State University systems, for example, includes completion of Algebra I, Geometry, and of algebra II.

But amid the disruption from the wildfires and their residual effects, including smoke days and power cuts, as well as the year and more of remote learning during the pandemic, many local students are not not meet the CSU and UC preparation requirements.

In schools in the city of Santa Rosa, for example, the rate of graduates meeting all requirements has dropped 14% over the past five years.

This kind of data and conversations with local high school math teachers have Melvin worried about the state’s big pivot away from remedial classes.

“To do something so drastic just as we are coming out of the pandemic seems dishonest,” he said. “Disabling all options (fixes) is also inequitable.”

The debate hits the bull’s eye on campus

Shawn Smith, who is studying nursing in junior college, returned to school in the fall of 2021, 27 years after dropping out of eighth grade. He then completed a GED in 2009, but passing college-level math when he entered college was “not possible,” he said.

The remedial course in which he earned an A last fall prepared him to pass statistics and chemistry, he said.

“If I hadn’t taken this course, I know for a fact that I would have failed,” Smith said. “And that would have crushed me. It wouldn’t have been worth it for me (to pursue school).

Now, he says, he gets A’s in all his courses. But early failure, he said, would have cemented his long-held fears about himself as a student: “See, I knew school wasn’t for me. . I knew I was stupid.

Where to find San Lorenzo v Boca Juniors on US TV