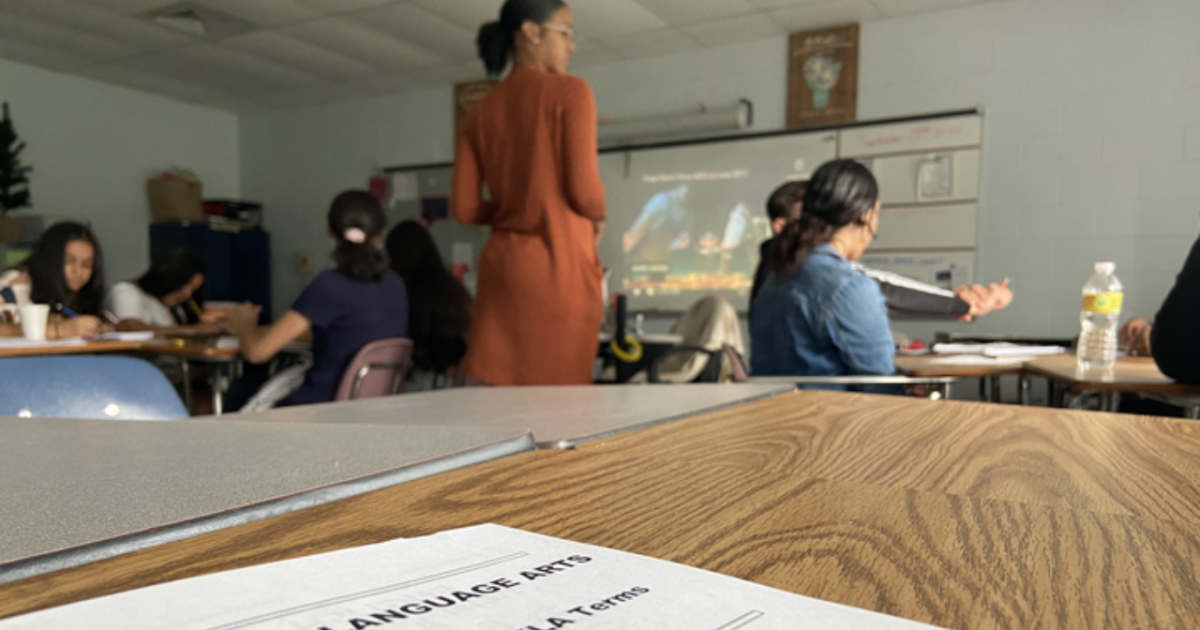 TAMPA, Fla. — There is a growing population of Hispanic students in Tampa Bay schools, many of whom are migrant children fleeing unrest in their home countries.

“Tell me about the characters first; who did you see?” Ms. Ashanti Foresyth asked her class at Wharton High School in Tampa.

Watching a short film and showing the characters might seem like a basic lesson in storytelling process, but it’s way more in its class.

“Today there was only one person in the class who didn’t speak Spanish, and she was from the Philippines,” Foresyth explained.

At Wharton High, 9% of students learn English and 71% of them are Spanish speakers.

“They’ll come up to me, and they’ll start talking in Spanish, and I’m like, ‘Oh, I got that word or that word,’ you know, and then we’ll laugh at each other and (say), ‘ Oh, no, it’s this way, not that way.’ And it just creates a more nurturing learning environment, and they’ll try harder, they’ll put in more effort,” Foresyth said.

She teaches English 1 as well as “ESOL” which means English-Spanish or other languages.

Its ESOL classes are just a few of hundreds at Hillsborough County Public Schools (HCPS), where nearly 23,000 of the district’s 224,000 students learn English.

“One of the things we have to pay attention to, unfortunately, is like everywhere there is conflict in other countries, because that usually means we’re going to see more students,” Elena Garcia, executive director of the district for English language learners and the migrant program. said.

Over the past three years, the district has added 9,000 migrant students, a large influx this year, fleeing civil unrest in Cuba.

“Over the past five years, about 150 Cuban students would enroll on average each year, and from the beginning of the school year until now, we’ve had about 600,” Garcia said.

The number of unaccompanied children arriving in the United States is only increasing.

“They flee violent situations. They face many challenges and traumatic experiences. So getting used to going through the adjustment process, getting used to the new environment. Upon entering school, many of them have had no prior formal education,” said Rosario Noa, regional immigration and refugee program manager for Church World Services.

Noa adds that one of their biggest daily challenges is finding resources to help children who can’t read or write, let alone understand the language.

In addition to ESOL courses and bilingual paraprofessionals or auxiliaries, each teacher has basic training in ELL.

“It’s important that they learn the language and the content simultaneously because we want them to be able to achieve the American dream like any other student,” Garcia said.

This year, the district also added 80 immigrant students from Afghanistan, and they expect an influx from Ukraine soon.

Another challenge for the school district is to ensure that students have help in the event of a major staffing shortage.

“The ESOL resource teacher, the ESL teacher and the bilingual paraprofessionals are a team that we are so grateful for, because our students need them the most,” said the HCPS ELL coordinator. said Kathryn Raike. “We really appreciate them, and we need more.”

Foresyth is not fluent in Spanish, but said it helps the kids to see her try.

“It helps them see ‘someone cares about me,'” she said. “They’re going to go the extra mile to really connect with me and not just, you know, put papers in my face.”

Pinellas County Schools told us that since January 2021, they have identified 1,689 Spanish-speaking (EL) English Learners, estimating that about 750 entered from another country or state.

Church World Services also told us that there are some barriers to unaccompanied minors entering local schools.

In Florida, children are not required to attend school after age 16, so many will not accept those with pending immigration status to enroll between the ages of 16 and 17.

“Sometimes we are dealing with 17-year-olds, they want to go to school. They take them to school to enroll, but they are told that because they are 17, it does not make sense for them to go to regular school, and they are sent to education adults,” Noa explained.

She also mentioned the need for free tutoring services as well as transportation.

Chronicle of a financial collapse