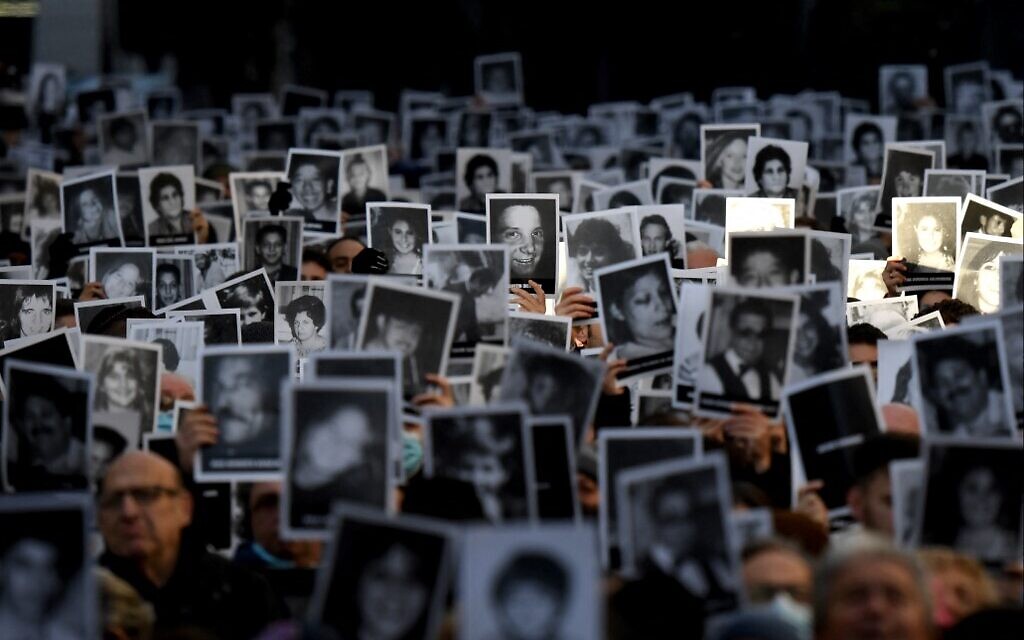 On Anniversary of AMIA and Burgas Bombings, US Calls for Global Front Against Hezbollah

The United States urged countries around the world to step up action against the Lebanese terror group Hezbollah on Monday, as relatives and others marked the anniversaries of two deadly attacks by the group nearly two decades apart.

On July 18, 1994, a van loaded with explosives crashed into the Argentine Israelite Mutual Association (AMIA), a Jewish community center in Buenos Aires, killing 85 people and injuring hundreds more in the attack on deadliest in the country. Exactly 18 years later, a bomb placed on a bus ready to transport Israeli tourists from an airport in Burgas, Bulgaria, exploded, killing five Israelis and a local bus driver and injuring nearly 40 others.

Highlighting Iran’s sponsorship of the attacks, the US State Department called for more capitals to join “more than a dozen countries across Europe, South America, Central America and the Pacific “. [that] have issued national designations, bans or other restrictions” against Hezbollah.

“The ruthless killing of civilians must not stand,” State Department spokesman Ned Price said in the statement. “We urge more countries to take similar action, making it harder for the group and its supporters in Tehran to threaten global peace and security.”

The comments came days after US President Joe Biden traveled to the Middle East for meetings focused on supporting countries in the region against Iranian aggression. During the trip, Biden and Prime Minister Yair Lapid signed a joint statement in Jerusalem in which they pledged to “work with other partners to address Iran’s aggression and destabilizing activities, which they are advanced directly or through terrorist organizations such as Hezbollah, Hamas, and the Palestinian Islamic Jihad.

Although the State Department has called for action against Hezbollah in the past, it had not previously tied the call for more sanctions to the anniversaries of the bombings.

A rabbi walks past a sign that reads ‘Memory and Justice’ alongside the names of victims of a bombing at the Jewish community center of the Jewish Mutual Association of Argentina (AMIA), on its 28th anniversary, in Buenos Aires, Argentina, on July 18, 2022. (Luis ROBAYO / AFP)

In Buenos Aires, hundreds of people gathered near the site of the former AMIA building to commemorate the victims and urge that those responsible be brought to justice. Iran and Hezbollah have long been linked to the suicide bombing. According to investigations by Argentine Jewish prosecutor Alberto Nisman, six Iranians and one Lebanese have been on Interpol’s most wanted list since 2007.

However, Iranians accused of being involved in the plot can still move freely. In January, a public appearance by Iranian official Mohsen Rezaei during the inauguration of Nicaragua’s president angered Argentina and prompted a harsh response from its foreign ministry, which called Rezaei’s presence “an confront Argentine justice and the victims of the brutal terrorist attack” in the Argentine capital.

Rezaei, a former leader of Iran’s paramilitary Revolutionary Guards, is wanted by Argentina on an Interpol ‘red notice’ in connection with the attack.

Meanwhile, Argentina’s current vice president Cristina Kirchner has faced serious allegations of trying to cover up Iran’s role in the attack. The lawsuit against her was filed in January 2015 by Nisman, who was found dead in his apartment just hours before he was due to present evidence against then-President Kirchner. She was released last year.

Unlike previous years, this year’s memorial event of the 1994 attack, which was the first to take place since Kirchner was cleared of cover-up, brought together low-level government officials. Argentine Education Minister Jaime Perczyk and worship secretary Guillermo Oliveri were spotted at the event, who local reports said “kept a low profile”.

Argentine President Alberto Fernández, who did not attend this year’s memorial, tweeted: “28 years after the attack on AMIA, we say ‘present’ again. For the 85 people murdered that morning, for their families and for all of Argentina. 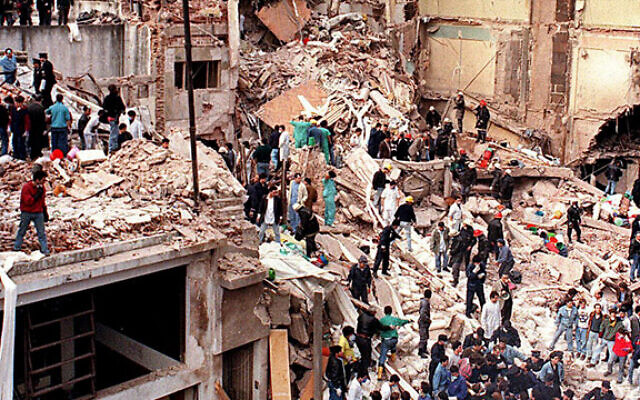 The aftermath of the bombing of the Argentine Israelite Mutual Association (AMIA) in Buenos Aires, Argentina, on July 18, 1994. (AFP)

Speaking at the event, newly elected president of Argentina’s Jewish community, Amos Linetzky, linked the attack nearly 30 years ago to a recent Argentine investigation into a cargo plane with an Iranian crew and Venezuelan who has been stranded outside Buenos Aires since June.

“The aerial event shows that Argentina is the same as 30 years ago. Our borders are still permeable,” Linetzky said in his speech, according to local media.

Without mentioning Kirchner in his speech, Linetzky focused his criticism on the unit investigating the terror attack, which he blamed for failing to produce results in recent months.

“How do you spend your days, occupying one of the largest parquet floors in the country?” He asked.

Cecilia Incardona, the prosecutor in charge of the case in Argentina, is focusing her investigations on the Iranian pilot of the plane, Gholamreza Ghasemi, and his possible links with international terrorism.

The FBI said in a report to Argentine federal judge Federico Villena, who is handling the case, that Ghasemi is the CEO of Qeshm Fars Air, which the US Treasury Department says provides material support to the Quds Force. Iranian Revolutionary Guards and the Iranian airline. Mahan Air, according to a document released by Incardona’s office this week. 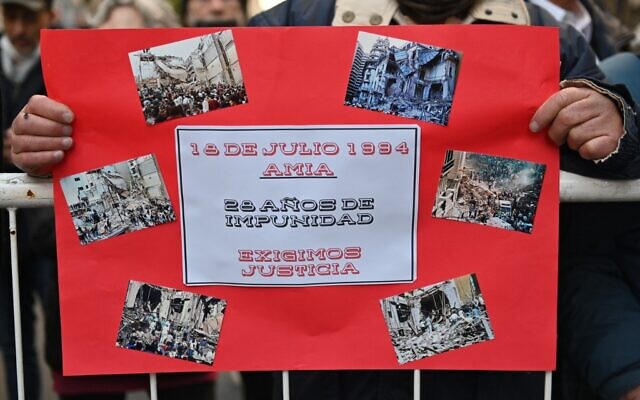 Relatives of victims of a bomb attack at the Jewish community center of the Israelite Mutual Association of Argentina (AMIA) hold photos during its 28th anniversary, in Buenos Aires, Argentina, July 18, 2022. (Luis ROBAYO / AFP)

Meanwhile, a meeting hosted by the US State Department in late June, attended by representatives from 30 countries, including Israel, Saudi Arabia, four other Gulf states and Latin American countries, is focused on global efforts to counter Hezbollah’s illicit activities, according to a recent Axios Report.

The meeting was held in Europe and marked the first effort of its kind led by the United States to combat the terrorist group on a global scale.

Agencies contributed to this report.

You are a dedicated reader

We’re really glad you read X Articles from The Times of Israel over the past month.

That’s why we started The Times of Israel ten years ago – to provide discerning readers like you with must-read coverage of Israel and the Jewish world.

So now we have a request. Unlike other media, we don’t have a paywall in place. But since the journalism we do is expensive, we invite readers to whom The Times of Israel has become important to help support our work by joining The Times of Israel community.

For just $6 a month, you can help support our quality journalism while benefiting from The Times of Israel WITHOUT ADVERTISINGas well as access Exclusive content only available to members of the Times of Israel community.

Thanks,
David Horovitz, founding editor of The Times of Israel