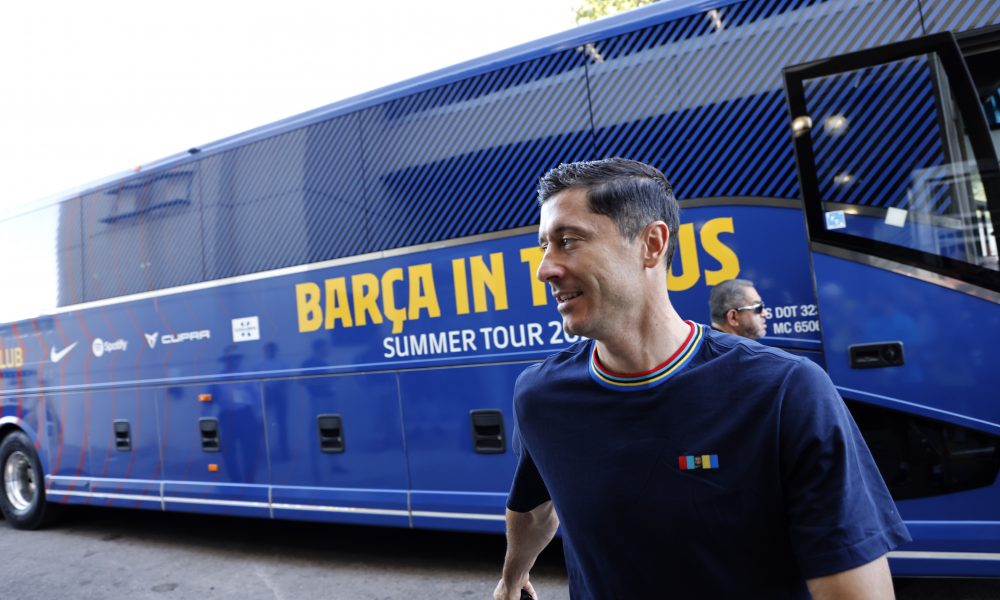 Robert Lewandowski’s transfer to Barcelona from Bayern Munich has undoubtedly been one of the biggest transfers of the current transfer window.

The deal wasn’t easy to complete as the German champions were unwilling to part ways with the veteran goalscorer. But ultimately, Lewandowski’s desire to join the Blaugrana and the Catalans’ persistence finally paid off as the striker ended up finishing the move.

Lewandowski has already made his unofficial debut for Barca in their pre-season friendlies against Real Madrid and Juventus in the United States.

The Polish captain sat down with an interview with ESPN during which he spoke about his transfer to Barcelona, ​​his motivations for joining the Catalans, the possibility of playing under Xavi Hernandez and various other topics.

“I’m very happy to be at Barcelona. I know I’ve only been a Barcelona player for a few days, but I feel like I adapted quickly. Every day I try to do my part to adapt. at the club. Lewandowski said about his move to Barcelona.

Talking about how Xavi and his new teammates have helped him, the striker added: “He helped me a lot. Our communication is good. I noticed that my teammates wanted to help me and that was very important to me.

“We had a great time at BVB. It was about nine or ten years ago, but I remember very well the way we played, what we did off the pitch, because he is a great friend. I am very happy to be with Aubameyang at my new club.

Explaining his decision to move to La Liga, Lewandowski said: “I always dreamed of playing in La Liga. I know my time at Bayern was great, I know I won everything, but after 12 years in the Bundesliga I knew it was time to try something again.

“I can’t say anything bad about my former teammates and Bayern, even though they had a ‘policy’ before I joined Barca, but everything I achieved at Bayern was fantastic. I know I I was in a comfort zone at Bayern, but I wanted something new, a change,” he added.

“When I found out that Barcelona were interested in signing me, I knew it was a sign that it was time for me to leave Bayern and play in La Liga. I know I can keep playing at a high level in the years to come.

Lewandowski then opened up about his time at Bayern under former Barcelona manager Pep Guardiola, saying it helped him understand Barca’s principles and philosophy to some extent.

“In my first two years at Bayern I had eight Spanish team-mates and almost all the staff were Spanish. In that time I learned from the Spanish staff and my team-mates… How they worked, how they played, the tactics with Pep… By the way, his tactics are amazing. he stated.

“I know it will be easy for me to adapt to Barcelona, ​​my experience will help me. I try to speak to my teammates in Spanish, because I want to learn the language more. I still need a few weeks to improve myself, Lewandowski added.

Speaking about Barcelona’s new signings, the Polish captain said: “I’m really impressed. We have a very strong team. We’re ready to think about titles. I’m the guy who always thinks about winning every game.

On Barca’s ambitions to win titles and trophies this season, he said: “I know that with Xavi we can do it because I have seen how he prepares for training and all the work we do. All of this tells me that we are on the right track.

When asked what Barcelona’s attacking trident will look like in the upcoming season, Lewandowski replied: “It is very difficult to answer this question. We have about five or six attacking players in the squad, and they all have different profiles.

“At Bayern I worked with different types of attacking players; those who dribble a lot, those who send a lot of crosses and so on. But I don’t care who I have as wingers, I’m very flexible. I am ready to play with any player and any tactic.

“I can adapt to any formation, tactic or system. I know it will take time, but I can adapt and it will be easy for me,” he added again.

Lewandowski will link up with another former Borussia Dortmund star in Ousmane Dembele, who re-signed with the club after letting his previous contract expire.

“He’s a fantastic player. He has top qualities. I hope he stays healthy all season. If Dembélé is focused on the game like he is now, he can score a lot of goals and provide plenty of assists,” Lewandowski said about the French striker.

“I’m sure that with this form, and if he stays healthy, Dembélé can be one of the best players in the world. In training, I see he’s different, he’s very good.

When asked if he could continue his prolific La Liga goalscoring record, the former Bayern Munich striker said: “I played in the Champions League against Spanish teams, it’s nothing new for me. I’m ready for that.

“I don’t care who I play against or how difficult an opponent is, I will always do my best. I am ready for anything. I have a good mentality. There are more games in a season in La Liga than in the Bundesliga, so I will have more chances to score more goals.

Lewandowski’s arrival at Barca will see him take on Real Madrid superstar Karim Benzema in what will be a rivalry between two of the best forwards on the planet today. Addressing his potential battle with the Frenchman, Lewandowski said:

“Karim is a fantastic player, he had a brilliant season in the Champions League. I wouldn’t like to compare myself to him… He has been in La Liga for many years, but it would be a new challenge for me.

“Benzema showed last season how good he was, but more than comparing me to him, for me it’s more important how we are going to play at Barcelona, ​​what we are going to achieve and win every game.”

Following Lionel Messi’s departure last year, Barca lost a leader on the pitch and Lewandowski insisted he was ready to take on that role. “Of course it’s a great opportunity for me to be the person leading the team,” he said.

“On the pitch, I want to lead my teammates with my body language; to show them that no matter how many goals we have scored, we can always score more. Always think positive, always play forward. Always work hard. That’s what I want to do.

Looking forward to the upcoming season and the challenges ahead of Barcelona, ​​he said:

“Barcelona signed five new players this summer. The first weeks will be a bit more difficult for the whole team because all the new players will have to adapt… But the season is very long, in a few weeks this team will be working.

“There were issues with what the old council [Bartomeu’s board] done with the team, what happened last year and how complicated last season was for Barca, now everything has changed. We are all working hard, we are all positive. I’m sure Barca will succeed.

On how he and Barcelona plan to snatch the La Liga title from Real Madrid, he said: “We will try, doing our best. But of course Real Madrid are the current champions, they will play well and try to defend their title.”

Looking ahead to facing Messi and Argentina at the FIFA World Cup, the Poland captain said:

“They have Messi. For me, Argentina are the top 3 candidates to win the World Cup. I know this World Cup is very important for Messi, and he will do his best. It will be a challenge for us. . »

Lewandowski also revealed that rumors about Bayern Munich’s interest in Erling Haaland didn’t play a role in his exit from the club.

“No. It had nothing to do with him. I never saw a problem with Bayern signing him, but some people didn’t tell me the truth. The truth is the most important thing .

“For me, the most important thing is that people are clear with me. I wanted them to tell me the truth, but some people [at Bayern] didn’t do that. And I saw that something wasn’t working and I felt it was time to change. My time at Bayern is over. Now a new chapter in my life begins, Barcelona.

Lewandowski also took the opportunity to thank Bayern fans for supporting him, saying: “In recent months, many things have been said about me that were not true. But the Bayern fans have always supported me. I will always be very grateful to them, I will never forget it. It was a period very difficult for me.”

Finally, talk about its official presentation in Barcelona on August 5In front of home fans, Lewandowski added: “I see that they support me a lot. I am very grateful, I will be there on August 5th. I know what that means for the fans.