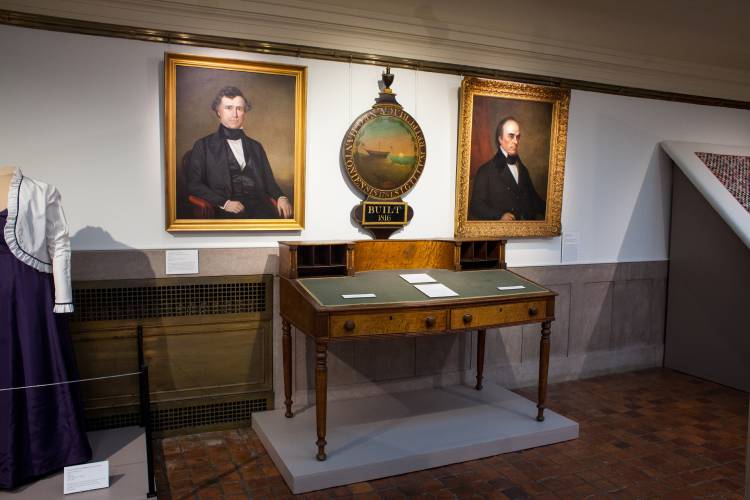 How should social studies be taught in NH? This local working group offers some guidelines

“For math students, I literally said ‘go to the common core website and they have modules for every lesson you’ll need to teach,'” Eckert said. “’Social science students: are you ready to reinvent the wheel? Here we are.’ ”

Eckert, the coordinator of social studies teaching at Plymouth State, taught at Moultonborough Academy for eight years and twice won the New Hampshire History Teacher of the Year award. She knows how difficult it can be for new social studies teachers in the state, where there is little guidance for curriculum and lesson planning.

“It’s weird how little support there is for social studies teachers and it doesn’t exist in any other subject,” Eckert said.

Eckert wears another hat as a board member of the NH Council for the Social Studies, which last month released a new set of guidelines in partnership with the New Hampshire Historical Society that they hope will provide a framework to school districts about what a good social studies curriculum should look like.

The guidelines offer eight key principles for a strong social studies curriculum, such as including diverse perspectives while simultaneously promoting a common heritage, and teaching with a “spiral” approach that provides increasing depth and complexity. as students progress.

“We’re trying to support schools with guidance and leadership that they haven’t received from the state,” said Elizabeth Dubrulle, director of education and public programs at the New Hampshire Historical Society.

New Hampshire teachers and historians say the 2006 standards, the only reference document that exists, leave much to be desired. On the one hand, Eckert said, many notable events have happened since 2006. For example, she said, the way war is fought between nations has fundamentally changed. And the Supreme Court’s recognition of same-sex marriage in 2015 expanded the definition of civil rights.

But there’s also been a major research-backed shift in how social studies is taught, Eckert said, toward an inquiry-based model that’s not reflected in the state’s 2006 standards. . In inquiry-based teaching, educators pose questions and scenarios, and students learn to use the skills they need to find their own answers to the kinds of issues examined by historians and political scientists.

One of the new guidelines from the Historical Society and the Council for Social Studies recommends that social studies employ instructional practices that teach students to draw their own conclusions.

“There is growing evidence that students learn when they are empowered to solve problems,” Eckert said.

The “spiral” approach recommended in the guidelines leads students to revisit topics over the years in increasing detail.

Another guideline recommends that social studies programs have common themes that produce narrative arcs for students. For example, Dubrulle said, simply reading a story about Martin Luther King as part of an English class doesn’t count as incorporating social studies.

“These kids need a framework, a timeline to make sense of it all,” Dubrulle said. “It’s like you teach chemistry and don’t teach the periodic table of elements. What you have is a mess of stories that don’t relate to each other. This is what kids are missing out on by not having a formal social studies curriculum.

Another guideline recommends that social studies educators be trained professionals who are prepared to facilitate learning of complex topics. Eckert said tight budgets and hiring shortages mean many schools are asking other teachers to come in and teach social studies classes, instead of hiring a full-time social studies teacher. full.

Dubrulle believes social studies education has been neglected for decades, both nationally and in New Hampshire, since the 2001 No Child Left Behind Act led school districts to prioritize the arts of English language and math due to annual testing requirements.

In fact, Dubrulle said, many New Hampshire school districts don’t offer social studies education until eighth grade, which she attributes to a lack of an enforcement mechanism. There is currently no annual statewide testing requirement for social studies in New Hampshire.

Hill said having formal guidance for teaching social studies is more important than ever, since the state’s ‘Freedom from Discrimination in Education’ law took effect in 2021. , restricting how teachers in public schools can teach about racism, sexism and other forms of discrimination. in the classroom.

“How can we protect ourselves from lawsuits by teaching what was correct and which may have no slant, but which could be perceived as having a slant?” said Hill.

Some local state experts have undertaken their own curriculum development projects. The New Hampshire Historical Society launched Moose on the Loose, a New Hampshire upper-elementary social studies program, in 2019. The Black Heritage Trail of New Hampshire has partnered with the University of New Hampshire and local teachers to create lesson plans on Black History in Granite. State. Eckert is currently working on creating a website with the Plymouth State Education Program Seniors that compiles inquiry-based activities for different social studies topics and makes them available to teachers. .

Dubrulle hopes that the new guidelines from the Historical Society and the Council of Social Studies will be the reference document school districts need to begin making substantial changes to rebuilding their social studies programs.

“We understand how it happened, but we need to address these issues if we’re going to do anything about social studies in schools,” Dubrulle said.

The new threat to the good education of minority Americans