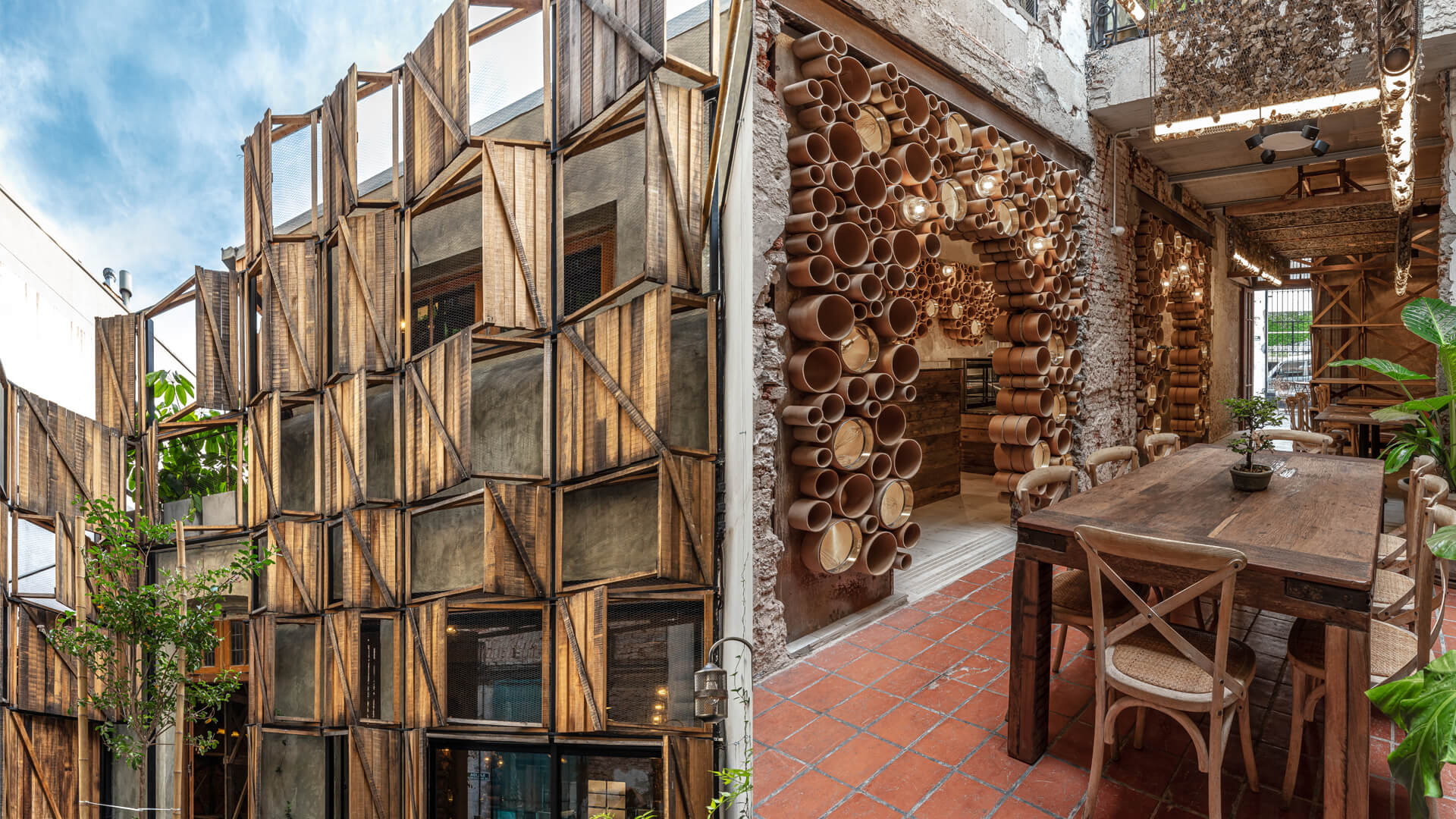 The smell of a freshly baked pie, the sweet aroma of cream mixed with an icy pink mousse, the windows opening onto the street inviting passers-by to glimpse slow cooking, a life free from the stresses of today … Buenos Aires-based cabinet Hitzig Militello Architects found its muse in the evocative lightness of these memories when it set out to conceptualize the interiors of a local restaurant, named Moshu Treehouse. It was an old two-story house in the Palermo neighborhood that they had to work around with.


The studio sought spatial inspiration in the design of the traditional patios that lined the city’s old houses, spaces known for bringing people together. In the same concern to create a social magnet, the architects decided to build a courtyard at the entrance and to work on the space that surrounds it, in particular by preserving the old facade. “Functionally,” the studio shares, “the patio is an integral part of the take-out model, while also exploring post-COVID outdoor use.”

The arrangement of the patio gave rise to a new vocabulary of façade which has become a distinctive feature of the restaurant. Offsetting the main wall, a metal grille surrounding several reclaimed wood windows populates the facade. Wooden slats make up each of these windows and their layout includes a few flexible openings that could easily be opened and closed depending on the weather. For the design team, the concept of this façade was to create “a symbol and shock effect” for those arriving at the entrance.

“The proposed language is the result of a thorough breakdown of the elements defining the gastronomic proposal, which celebrates the typical American pastry”, shares the design team. From the idea of ​​”cooling the pie through the window” that manifested itself in the checkered glass facade, the architects also reproduced the shapes of the cakes and pies by creating an assembly of cardboard rolls on the walls. Upon entering the restaurant, one finds a semi-open courtyard dotted with wooden seating that leads to an indoor reception and bakery counter. The walls reveal plasterwork that stands out from the surfaces revealing slabs of exposed brickwork. The transition between the two spaces is made by portals without shutters adorned with arches made of rolls of cardboard of different sizes. Behind the bakery counter too, these elements are reproduced as accents offsetting the wall. Interestingly, some openings in the rolls incorporate fixtures while some carry in its holes a beater and colander, which are essential tools of a baker.


The ground floor features a cafeteria and bakery with plenty of indoor and outdoor seating, and the first floor houses a private lounge, bar and rear terrace. A distinguishing feature on the ground floor is seen in the way the clusters of dry leaves take over the light fixtures and the undersides of the ceiling, much like nature reclaims the ruins. Speaking of the guiding thought and how it generated the materiality of the space, the design team explains: “The language of the interior architecture is vernacular composition in the typical demolished industrial style. In fact, the word “demolished” itself denotes the idea of ​​using elements simulating an “on-site” environment: scaffolding wood, site iron, wire mesh… These are all neutral materials made up of a universe of constructive layers Around them, a dilapidated and abandoned house where the dry vegetation has taken over.”


An exterior staircase connects the second floor directly to the street. Here, the aesthetic presents a more refined vocabulary where walls and surfaces are clad in wood and textiles that complement the overall warmth. The roof above the bar continues the abandoned effect of the ground floor by showcasing a mesh skin that contains within it several bunches of dry leaves.

It is fascinating how an old house that has undergone a complete overhaul has actually been conceptualized to look very dated and even bereft of human contact; all to serve the opposite function of bringing people together and celebrating the spirit of the city. The 240 m² restaurant takes its name from a “Lagerstroemia tree”, which sits in the center of the outdoor courtyard, while the wooden elements that surround it connect it to a tree house.