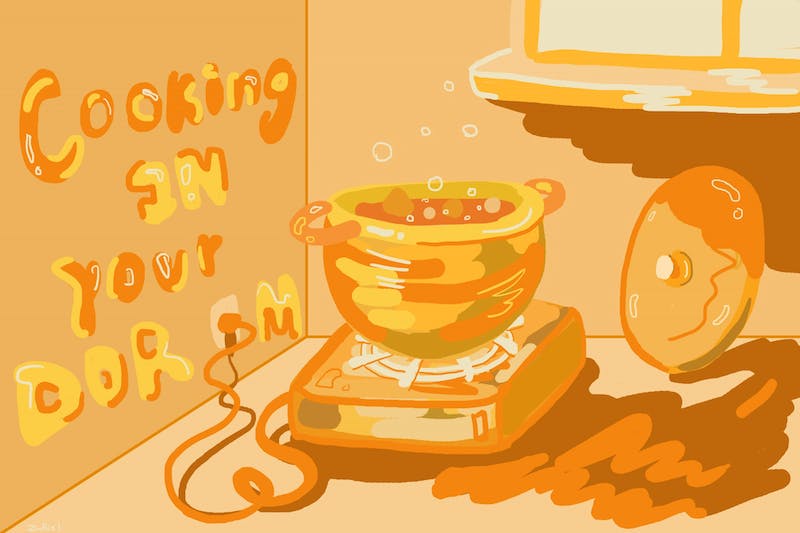 A DDS policy prohibits students from cooking in the common kitchens with ingredients from the Class of 1953 Commons.


Given restaurant changes and closures related to COVID-19, lack of options for students with dietary restrictions, and cravings for home-cooked meals, many students are finding ways to adapt to the challenges of dining. university.

Hsu Hay Htwe ’25 is from Myanmar. Before coming to Dartmouth, Htwe was always surrounded by authentic Burmese food. During her gap year before college, she learned to cook in order to have a future alternative to restaurants on campus.

“I was really scared of the food here,” Htwe said. “I’m not used to American cuisine…I started cooking on my gap year and was like, ‘I have to learn how to cook so I don’t starve.'”

However, she struggled to cook more complex Asian dishes due to a lack of ingredients.

“There is one [Asian grocery store] in western Lebanon, but there is none in Hannover, so it is very difficult to go out and get food,” Htwe said.

To overcome this challenge, she often travels to Boston to eat out and buys ingredients there to bring back to campus. These days, Htwe cooks for herself and her friends at least once a week. She often cooks simple, authentic recipes in the communal dorm kitchen or in her own room.

“Hot pot and ramen…they are so easy to make,” Htwe said. “For a fondue, just get water boiling and put a packet of fondue sauce on, then buy some thinly sliced ​​meat and cook it…it’s very stress-free.”

Claire Xu ’25 is a friend of Htwe and noticed a lack of Chinese food options at Dartmouth Dining Services locations.

“I’m much more used to home cooking than Foco, so I wish I could copy that to the dorm to have a nice hearty meal,” Xu said.

Although Xu doesn’t often cook for herself because, she says, finding and preparing ingredients takes too much time, she likes the way it brings people together.

“I think food is very important for connecting people,” Xu said. “Being able to make your friends cook, and sit and watch, talk and watch and have this sizzling sound in the background…I think it definitely brings us closer.”

While some students have transportation to access food from grocery stores, others find sourcing ingredients from outside Hannover difficult and time-consuming. This led to some students gathering ingredients in more accessible locations, such as the 1953 Commons class.

DDS director Jon Plodzik said that according to DDS policy, students cannot take food from Foco to cook in their dorms.

“The dining programs and accompanying meal plans are simply not designed for bulk food ‘purchases’,” Plodzik wrote in an emailed statement. “We are not a grocery store. Our program, like all others across the country, was created to ensure that all students have access to nutritious, safely prepared food options. We offer food in a suitable edible form and control all aspects of the production process.

He added that in his view, halls of residence “simply aren’t equipped for students to cook meals indoors while maintaining food security and enhancing personal safety.”

Despite this policy, some students, unhappy with the lack of diverse food options and accommodations for those with dietary restrictions, still collect ingredients from Foco.

Class of 2025 member, who asked to remain anonymous due to DDS policy, said she grew up surrounded by culturally authentic food in a Mexican home and didn’t know how she would adjust to it. dining room food.

“I had a little trouble eating…At first I just had to force myself because I knew I had to eat, but nothing really seemed appealing,” she said.

One day, she says, she observed other students on her dorm floor cooking in the communal kitchen and was inspired to do the same.

“I started going to Foco and doing what I’ve seen other people do on my floor, which is going to the veggie station at the salad bar and then coming [back to my dorm] to sauté it or use those ingredients to make other foods,” she said.

“I think that since there are a lot of students, [DDS] mass-produces so much food that it’s not as healthy as I would like…I’m also vegan and there aren’t many options other than tofu for me,” she said. “I prefer to spend my time in the kitchen cooking rather than waiting for a long time [Foco] line”

Another member of the Class of 2025, who also wished to remain anonymous given the DDS policy, is concerned about dining options. On several occasions, she was reprimanded by DDS employees for obtaining extra containers and filling them with fresh ingredients.

“With two containers, there’s not really enough space for all the food I want,” she said. “And a few times I’ve tried to put chickpeas in a cup and got in trouble for it… My containers are just full of arugula and broccoli — like, I can’t live on that.”

“Our take-out program (Green2Go) allows for a single meal to be taken in the dining room,” Plodzik wrote in an emailed statement.

For this student, however, cooking is essential to her identity and her well-being.

“When I’m home, I cook all my family’s meals,” she says. “It’s something that really amuses me. Not having the ability to cook…I didn’t realize the impact it would have on my mental health.