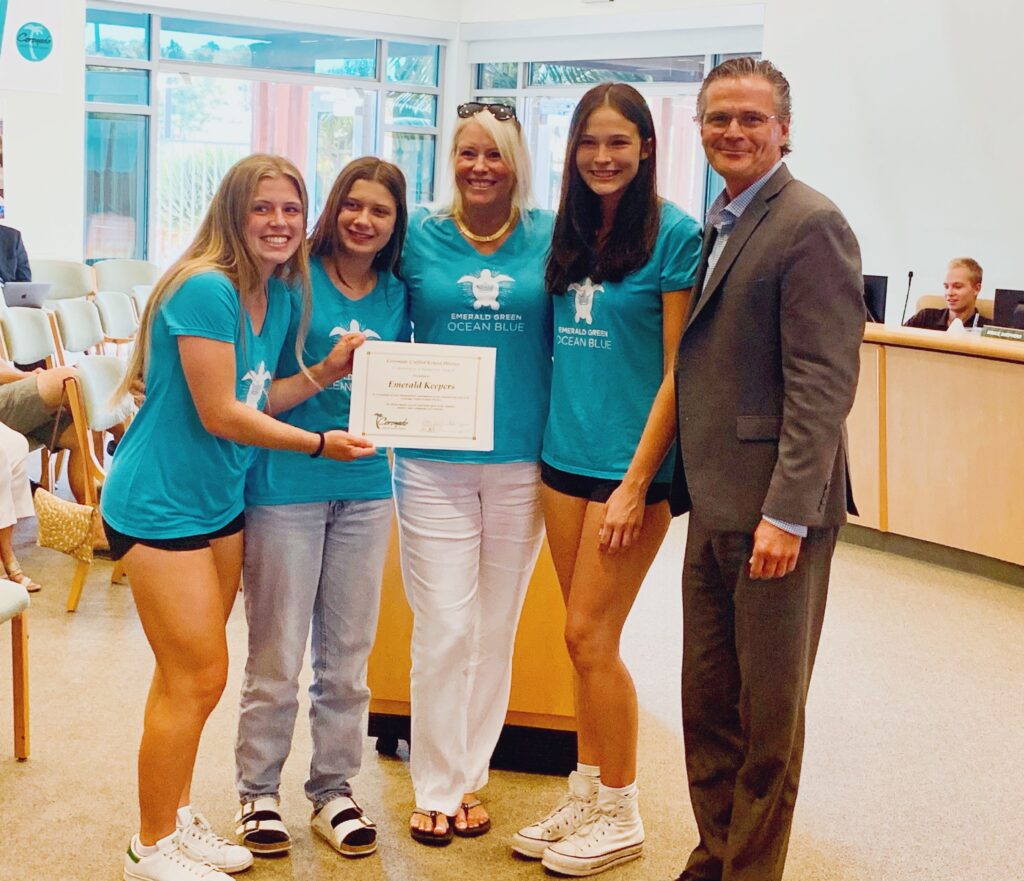 School board administrators from the Coronado Unified School District met Thursday, August 25 at district offices where the board approved the continued increase in the daily rate of pay for substitute teachers, celebrated the opening of Village Preschool and adopted a new textbook for K-5 Spanish. program. But it was item 6.5, which included AB-367, the Menstrual Fairness Act, that caught the eye.

The law, which was passed by the state of California in October 2021, requires all public schools serving students in grades 6 through 12 to stock an adequate supply of free menstrual products in all women’s restrooms. This also includes toilets for all genders and at least men’s toilets. (See the full text of the law here). During the Student Services Report, it was shared that CUSD is now in compliance with this state requirement.

This did not sit well with some community members, who took issue with the requirement that at least a boy’s toilet be stocked with menstrual products. Jon Mosier, Coronado resident and CUSD dad, said following this law supports lies and could destroy students’ ability to reason.

“Everyone of us knows it’s ridiculous to provide menstrual products in men’s rooms. Why? Because everyone in that room knows that the physical differences between men and women are not trivial. Teach Differently is lying to students,” Mosier said.

Trustee Esther Valdes-Clayton said she disagrees with the law and it puts CUSD trustees in a difficult position. She pointed to the fact that the board does not ratify or vote on anything, but simply acknowledges compliance. Even so, Valdes-Clayton said the new requirement forces schools to comply with a “legal fiction” and puts them at the mercy of “period Nazis” who would likely file complaints if violated.

Administrator Whitney Antrim said anything the district can do to make students feel safe is important, especially after a middle school student took her own life last year.

“At our last meeting, we heard from community members who talked about not feeling safe at school,” Antrim said. “I’ve heard some people say they don’t know which bathroom to go to…. their physical safety was threatened. Anything we can do to make them feel safe and welcome…they have a champion here.

Superintendent Karl Mueller said CUSD’s responsibilities are to uphold the law and that the district is in full compliance with the law.

In other district news, Mueller shared that CAASPP testing data looks encouraging, with many school grades in the district at or above pre-pandemic levels. He was also upbeat about the AP test results. Additionally, he shared that the graduation rate in 2022 is 98.6% and the GA eligibility requirements for UC/CSU admissions have increased to over 71% from 64%. .

As for district enrollment, Mueller says 2,806 students are currently enrolled, 14% of which are inter-district transfers. (For reference, 3,032 students were enrolled in fall 2018.) He said the lower number this year was directly related to the number of interdistrict transfers accepted by the district; in 2018, they represented more than 18% of the population.

Mueller said more information will be available in the fall in a full report from Dr. Megan Battle.

In other board business, the board approved continuing a temporary salary increase for certified substitutes for the 2022-23 school year. The salary increase, which was aimed at recruiting more substitute teachers, increased the certified salary to $200 per day and to $225 per day after ten days. Armando Farias, CUSD’s director of human resources, said he based the increase on research he had done on nearby districts and said some were paying $290 a day. The board also voted to increase the rate of pay for ranked alternates.

As for the long-term plan, Mueller shared a few updates: At the request of community members, a parent survey has been added to the California Healthy Kids survey. In addition, a staff survey is underway, focusing on employee satisfaction and well-being.

“You have very aggressive goals set here,” administrator Lee Pontes said of the long-term plan. “But that’s what the community wants, and that’s what they expect.”

Earlier in the evening during council recognitions, Shane Schmeichel, Director of Special Programs, shared that thanks to the hard work and dedication of district employees, the instruction of CUSD’s “smallest learners” is well underway. on the Village campus. The site hosted its first-ever class of three-year-olds at Village Preschool many years ago.

“Due to the implementation of Universal TK, all employees at both sites, Crown and Silver Strand, and now newly licensed Village Preschool, worked tirelessly through late spring and early summer to pack and preparing for Crown’s move to Village,” Schmeichel said. “While packing, they also made sure to consider the academic and social development of our students and how our new programming would truly support the future development and growth of our youngest learners.”

Luke Johnson, President of the ASB at the CHS, was also present at the meeting to share his very first report. He shared that Strand Elementary started the school year with buses for all students and free breakfast for all, and welcomed a new Innovation Lab teacher. In addition, the popular Running Club will be back on campus. Village Elementary is kicking off the school year with free student-requested games and free lunch spots, and is excited to welcome field volunteers back, according to Johnson. Coronado Middle School welcomes new students with the “Trident Hangout”, which allows new students to meet friends. Coronado High School invited new students to explore the campus at “TikiFest” with student-led tours, and CHS students enjoy a renovated library with study rooms.

Johnson also shared that he, like many of his peers, appreciated the newly imposed later start time (CHS Period 1 now starts at 8:30 a.m.).

“A lot of students tend to spend late nights doing homework, and that extra 30 minutes of sleep is helpful,” Johnson said. “I think this will benefit all students at Coronado High School.”

In the learning department update, Dr. Battle shared that the district is adopting a new curriculum to support the world language curriculum at the elementary school level, which includes a new textbook for the K-5 curriculum. Spanish FLEX.

The Coronado Eagle-Journal was recognized for publishing and supporting the Islander Times student newspaper, which has been distributed as an insert to every Coronado home and business on a monthly basis since 2013. Mueller thanked Dean Eckenroth for helping the high school newspaper get such exposure.

“Dean not only fully covers the cost of printing and distributing our high school newspaper, but he has been a generous supporter of the district for many years through his family newspaper,” Mueller said.

Mueller explained that the school newspaper, run by teacher Mr. Hoang, was no longer a club, but now a full-time journalism course that earns students credit as well as internships. Students learn about writing, editing, reporting, layout and design as well as the concepts of legal and ethical journalism. Mr. Hoang shared that Eckenroth is a dedicated benefactor who understands and respects students’ First Amendment rights, never requesting changes to editorial content.

The board also recognized the Emerald Keepers Club for their contributions. CHS club president Jesse Hill said club members were busy planting a garden using compost made from food scraps from Boney’s and local restaurants. They then donate the produce grown in these gardens to local San Diego families suffering from food poverty. Hill said she’s excited to see Emerald Keepers expanding across the district and helping CUSD be more sustainable.

Earlier in the meeting during public comments, Arizona attorney Ryan Heath of Project Gavel said his nonprofit was personally suing every board member for the psychological torture of a student who didn’t did not comply with the mask regulations. Heath said the student was kicked out of school and sent to virtual learning every day, and was humiliated and mocked by her teachers.

“She wanted to go to class, she just wanted to breathe. Being a biological child shouldn’t be a crime,” Heath said. “The district called the police on her. They stuck her in the cold. They mistreated her, and it’s all your fault.

Also during public comments, community member Carolyn Rogerson spoke about the “Out for Safe Schools” program which she says could be adopted by the San Diego Unified School District. She said the program, which identifies safe spaces for LGBTQ+ students, could harm children’s mental, emotional and physical health. As part of the program, school staff would wear badges that identify them as trusted adults; Rogerson claimed the badges could ultimately encourage sexual predators.

“Unfortunately, we all know that schools have been plagued by predators in virtually every school county in this country,” Rogerson said. “It strikes me how happy hidden predators pretending to be protectors will be to receive a badge equivalent to a license to hunt.”

The public comment portion of the meeting can be viewed here.

The next regular meeting of the Board of Directors is scheduled for Thursday, September 15.

Argentina who changed teams in time