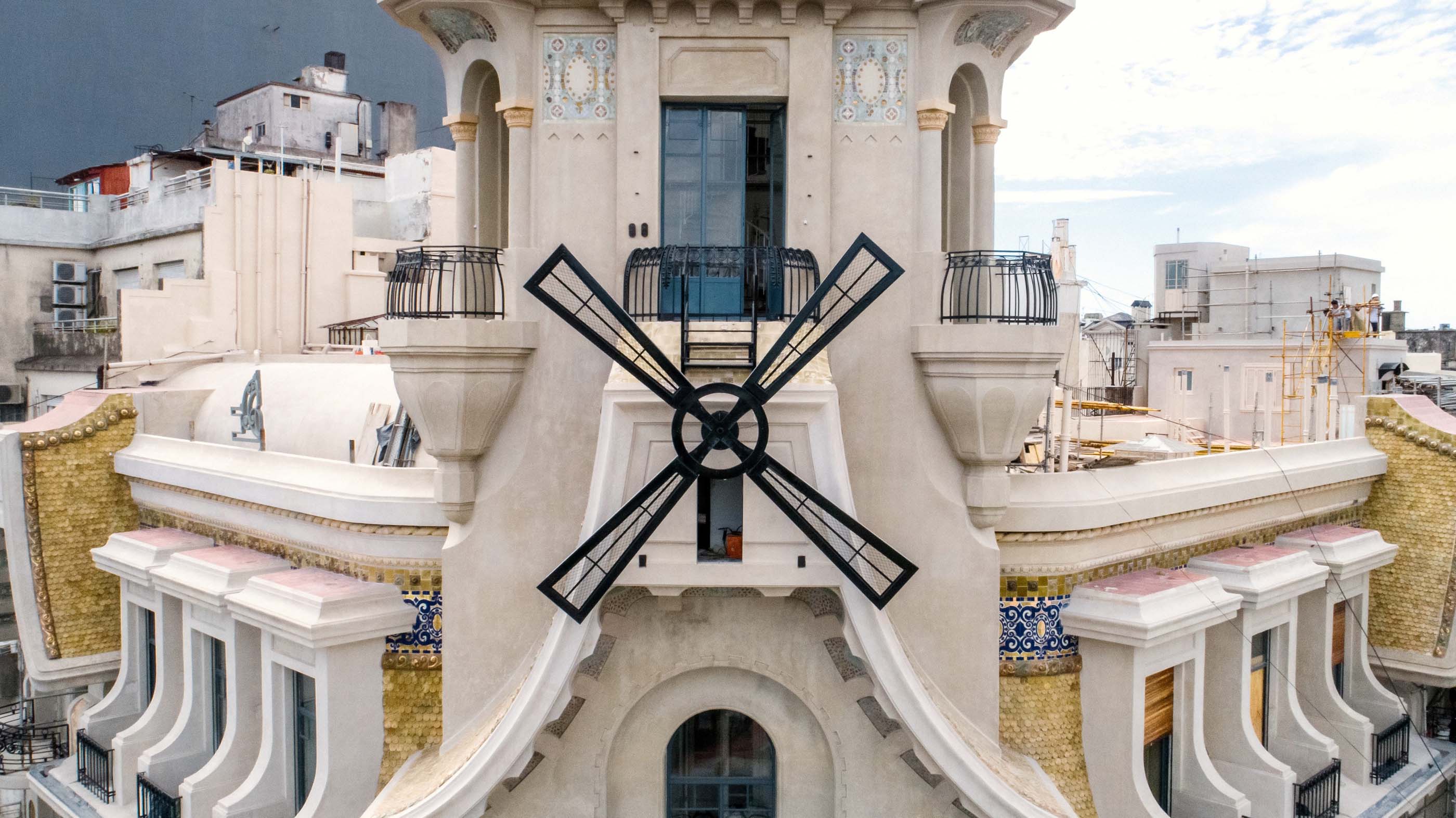 Confitería del Molino reopens after years of abandonment and restoration

After several years of fervent cleaning and replacement of ornaments, restoration work on the facade of the art nouveau style Confitería del Molino in Buenos Aires is complete and the historic building has reopened to the public.

Confitería del Molino, an eight-story building in the Argentine capital, dons a 213-foot high cupola, decorative metal balconies, stained glass windows and a windmill. It was designed in 1915 by the Italian architect Francisco Gianotti as a restaurant for the pastry chefs Constatino Rossi and Cayetano Brenna, also of Italian origin. Its name translates to mill confectionery, paying homage to the city’s first flour mill, located in the Plaza del Congreso across the street. When built, the 5,000 square foot cafe was one of the tallest structures in the city; he only used materials imported from Italy.

In its heyday, the cafe was a bustling social space, often frequented by politicians, who worked in the nearby National Congress, which dubbed the building the “third chamber” of Congress.

In 1930 the building tragically burned down, but was rebuilt a year later. After Brenna’s death, the building went through several other owners and the restaurant eventually went bankrupt in 1978. The historic structure was designated a National Historic Landmark in 1997 and later designated by UNESCO as a historic heritage site. Art Nouveau and the avant-garde of the Belle Époque. A transfer of ownership in 2014 placed the historic building in the hands of the National Congress, an act that launched restoration work from 2018.

Despite its many designations acknowledging its architectural significance, Confitería del Molino languished in a state of serious disrepair; its facade was stained by decades of air pollution, much of its iron and ceramic ornamentation had broken off, and its trademark windmill no longer turned.

The Ministry of Public Space and Urban Hygiene piloted the restoration project. A team of restorers began by thoroughly cleaning the stained facade. On the roof, the scalloped shingles were reviewed and replaced as needed. Careful efforts were made to replace the decorative elements of the building, including its stained glass windows, its tesserae and a pair of winged lion statues. Historical photos, sourced from local residents, and 3D modeling played a vital role in the restoration project and were used, where necessary, to replicate original design elements.

“La Confitería del Molino is one of the many historic buildings that the city has. We have worked to preserve its original image and spirit in order to enhance its heritage value so that neighbors can once again enjoy it,” said Minister of Public Space and Urban Hygiene Clara Muzzio. , in a press release published by the government.

An iron balcony on the fifth floor overlooking Callao Street has been replaced and rehung. A distinctive element of the building’s design is the black windmill planted on the rounded front facade; repairs to her sails and blade system brought this unique design feature back into service.

While the aim of the renovation was to improve the facade, the interiors were not spared. Artifacts of its historic past found on site, including old menus, have been salvaged, bringing living rooms, ballrooms and balconies to life. A number of structural and technical issues within the building were also resolved during the renovation; this included improving elevators and electrical wiring. Exterior lighting is a major element of the facade; the stained glass windows light up from the interiors and are illuminated again, restoring the Confitería as a beacon of the city.

La Confitería del Molino reopened to the public on July 8 and visitors can pre-book a tour of the building, which will take them to the ground floor, first floor, basement and rooftop.

Pope: I wouldn’t live in the Vatican or Argentina if I retired