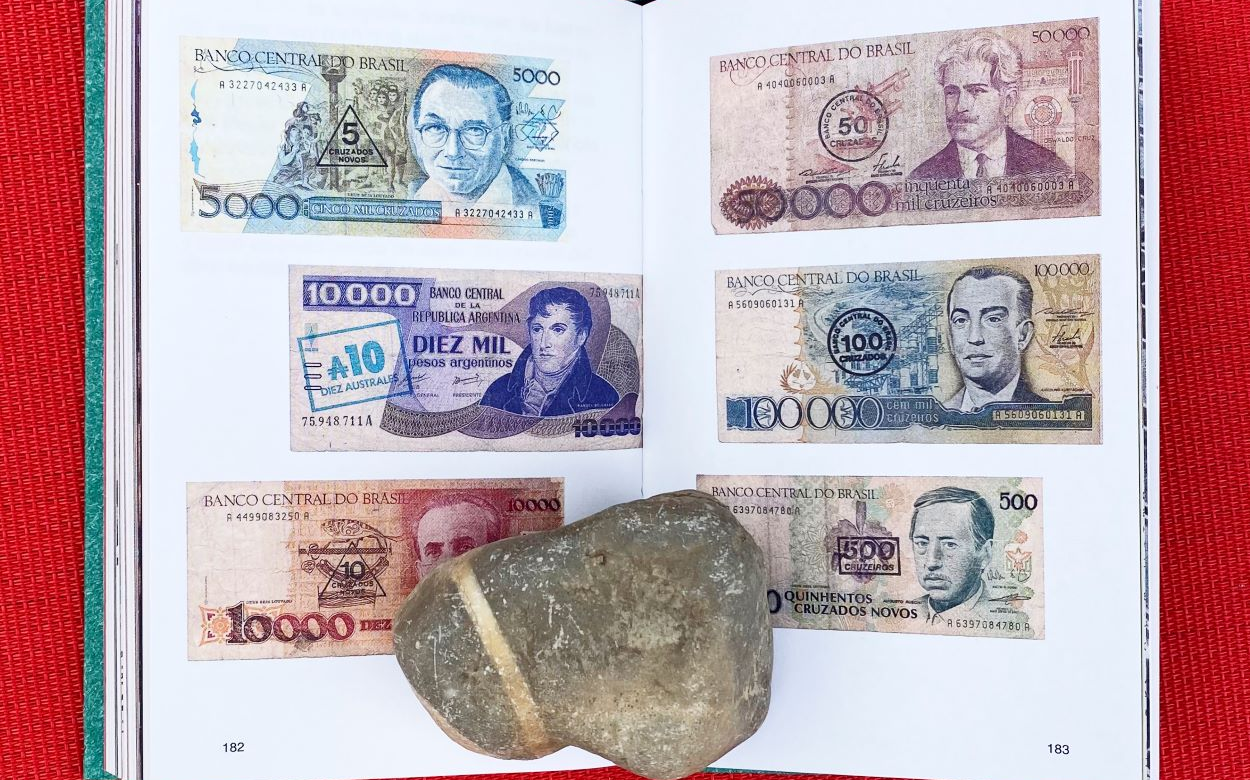 Chronicle of a financial collapse

Hoping to make a fortune amid the financial crisis gripping the southern cone of South America in 1979, an Argentinian electronics technician named Guillermo Zaccagnini invented a portable machine to detect the specific ink used to print US dollars. The “Dolar-Test”, which distinguished the real ones from the counterfeits that had become ubiquitous in the region, was quickly adopted by banks, hotels and exchange offices in Argentina and Brazil. Although the venture did not prove to be the windfall Zaccagnini had hoped for, it enabled the inventor and his family to leave faltering Argentina and settle in its slightly more affluent neighbor Brazil the following year. .

The man’s daughter, who was six at the time of her father’s invention, is Argentinian-Brazilian artist Carla Zaccagnini, who recently published Cuentos de Cuentas (“Accounts of Accounting”) (K. Verlag, 2022), a book in which she probes her own relationship to the fetish of the machine, the so-called “cold dollar”, the antidote to the chaos that reigned in the region during his childhood. Published in conjunction with Zaccagnini’s first solo exhibition in the United States, Accounts deals with many of the same themes the artist addresses through sculpture and installation, including the history of financial crises in Latin America, currency devaluation, and the daily impacts of authoritarian governance on everyday life.

In the book, a small volume whose mottled green cover evokes the texture and color of paper money, Zaccagnini’s touch is light, seemingly more concerned with the slipperiness of memory than heavy-handed political criticism. Cuentos de Cuentas presents her readers with a palimpsest of memories, told by members of her family, accessible through photographs, newspaper clippings and other material traces of her past, in addition, of course, to what she herself remember. Zaccagnini brings another element to her archival musings: the art she produced as a child – an iridescent collage pasted onto a theater program, an ink drawing of a black sun, a family in transit crudely represented in pencil – the beginnings of an artistic commitment with rupture and dislocation that she resumes as an adult in this project. These layers of memory hardly coexist; we don’t know what is true, what is an apocryphal family tradition or perhaps just the fanciful imagination of a child faced with difficult circumstances.

“This is how history is written,” she notes, “less with memory and more with forgetting.” Because a child cannot grasp the technical minutia of financial collapse, we are left with the emotional remnants of having lived through a period in which inflation reached a shocking three thousand percent in Argentina, forcing Zaccagnini’s family to migrate in search of better horizons in Brazil. . At the time, Brazilians were living, like Argentines, under a military dictatorship and facing their own inflation crisis, a crisis that would later prompt the civilian government that took power in 1985 to issue and abandon four separate currencies in less than 10 years before. finally stabilize the economy with the realthe currency still used today.

In English and Spanish, Cuentos de Cuentas offers its readers a series of enigmatic anecdotes from the artist’s childhood, seemingly random words marked in colored characters as if to signal a code hidden in the text. In one story, inscrutable businessmen from the Ivory Coast attempt to swindle his car dealer father out of a large payment of fake, dyed-black US dollars; in another, a second-hand tent – cream, red or blue – is bought by a man with his arm in a sling, his payment turning out to be nothing more than an envelope full of meticulously hand-cut paper. ticket size.

When I first received a copy of Zaccagnini’s book, I turned it over and immediately spotted a small white sticker in the lower right corner of the back cover, the number “19.99” written in black pen. Between April, when the book was purchased, and July, when I wrote these words, the cost of living index increased by almost 30% in Argentina, and in Brazil, the prices of consumer goods by basics such as groceries and gasoline have skyrocketed. Wages in Brazil have stagnated or risen at rates well below soaring inflation that provided a heated topic of conversation in the tense run-up to October’s runoff election between President Jair Bolsonaro , who desperately tried to rein in steep increases in living costs, and his rival, former president Luiz Inácio Lula da Silva, who oversaw one of the most prosperous periods in Brazil’s history (2003-2010 ). Despite a drop in inflation in September and October 2022, prices remain high: basic foodstuffs such as wheat flour and coffee are more than 20% more expensive than they were in 2021. If the Zaccagnini’s book was on sale in a store in São Paulo or Buenos Aires, its price is said to have practically doubled in recent months, during which rates of food and housing insecurity have risen sharply, meaning that for many , buying a book is an unimaginable luxury. Yet the little white sticker adorning the book listed its price in US dollars, a currency so coveted that Zaccaginini’s parents stored it in a jar hidden under their bathroom floor when she was a child.

In the book’s concluding text, the artist laments the transition from the physical manifestations of money – cash and coins – to the financialized abstractions inherent in late capitalism: “Money was a thing – concrete, present, solid “, she tells us. , “it could be kept safe and counted many times over.” Yet, as evidenced by the misfortune of millions of Latin Americans over the past decades of post-Cold War neoliberal reforms, austerity measures and structural adjustments imposed by Northern institutions, money is also a technology. of deeply precarious wealth.

And money is, after all, just paper. Even the sacred dollars of House Zaccagnini were not enough to guarantee the family’s stability as their region plunged into turmoil; she says that when her father removed the bidet under which he had hidden his treasure, the dampness of the bathroom had congealed the dollars into “a paste, as if they had returned to a previous state. From dust to dust, only wetter.

Cuentos de Cuentas by Carla Zaccagnini (2022) is published by K. Verlag and is available online and from independent booksellers.