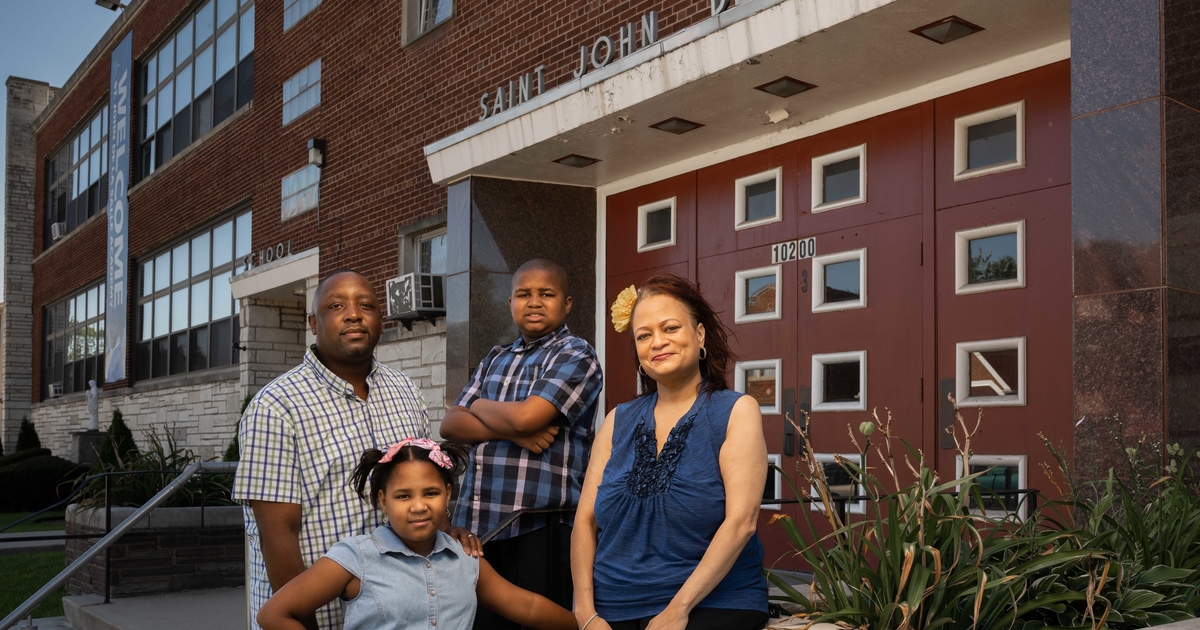 But some parents and students feel that their teachers or the school administration have not given them enough support during the pandemic.

Yarbrough, South Side’s mother, wished she had had a more assertive response from her son’s school and teacher when she brought up his falling grades. “I didn’t feel like we were on the same team,” Yarbrough said.

This led her to transfer Josiah in the fall of 2020 to St. John de la Salle Catholic Academy, where she saw him flourish. He has access to more after-school activities, she says, such as a Saturday STEM program, and is now a playground recreation monitor.

“There should always be something in place to deal with the socio-emotional side that was also taken away from them,” Yarbrough said. “And I saw that in St. John with Josiah there. I didn’t see that in CPS where my daughter stayed.”

This fall, her daughter, Jocelyn, a new fourth grader, will join her older brother in St. John.

Chicago public school enrollment continues to decline. Last October, a 3% drop from the previous year brought enrollment in the nation’s third district to 330,411 students, according to a 2021 CPS news release.

The district’s first-day attendance rebounded to roughly pre-pandemic levels, as 93.4% of registered students were in attendance for the first day of school Aug. 22, according to the district.

PATHWAYS TO CAREERS
“Let’s face it: we’ve seen a decline in enrollment over the past decade. We have under-enrolled schools,” CPS CEO Pedro Martinez said at a City Club of Chicago event in August. “I see this as an opportunity…an opportunity to create innovative school models.”

Martinez described one such potential model: a high school serving about 500 students that offers college credit toward an associate’s degree and is aligned with a career path, such as aviation or cybersecurity.

The We Will Chicago plan, launched in July by Mayor Lori Lightfoot, notes that “with about two-thirds of jobs in Illinois that would require at least post-secondary schooling or special training, formal education is a key predictor. an individual’s earning potential”.

Several programs that prepare individuals for gainful employment without having to complete a four-year degree already exist. Some partners with CPS and City Colleges of Chicago, and others are run by local businesses. There’s Aon’s two-year apprenticeship program, which has taken on more than 200 apprentices since 2017. Another is the ComEd Construct Infrastructure Academy, which graduated 69 participants in the spring. More than 70% of its graduates are placed in jobs and 95% of this year’s graduates were people of color, according to the program.

CPS and others are launching initiatives to fill academic gaps and rekindle engagement. The district’s $25 million tutoring program is more than three times the amount CPS spent on the initiative in the previous school year. The increased funding allows CPS’s tutoring corps program to expand to approximately 240 schools, with 760 tutors providing high-dose tutoring in reading and math.

A study from the University of Chicago Education Lab last year found promising results when ninth- and tenth-graders at CPS were given two-to-one math lessons every day for about 45 minutes. The tutoring model increased grades and reduced failure rates in math and non-math courses.

While rigorous tutoring and remediation is important, fostering an engaging environment for students is also essential.

Elaine Allensworth, Lewis-Sebring director of the Consortium on Chicago School Research at the University of Chicago Urban Education Institute, thinks schools and educators should also pay close attention to absenteeism and grades, which indicate engagement. “If a student doesn’t come to class, if they don’t get good grades, (then) they probably won’t get something they need,” she says.

In its 2023 budget, CPS increased its artistic and bilingual offerings and expanded its universal pre-K curriculum. More funding for after-school and summer programs is in the works. The district also increased the budget by $9 million for its Choose to Change program, which supports youth impacted by violence and trauma and struggling with absenteeism.

A concerted effort by the city, the public school system, community agencies, and families is imperative to prepare students to one day support themselves. But for some families, the stakes are too high to wait for systemic change to occur.

Now that the Yarbrough children are in private school, she says: “I feel like we’re planting a good seed and we’re on good ground right now. And I see what’s there. best for them.”