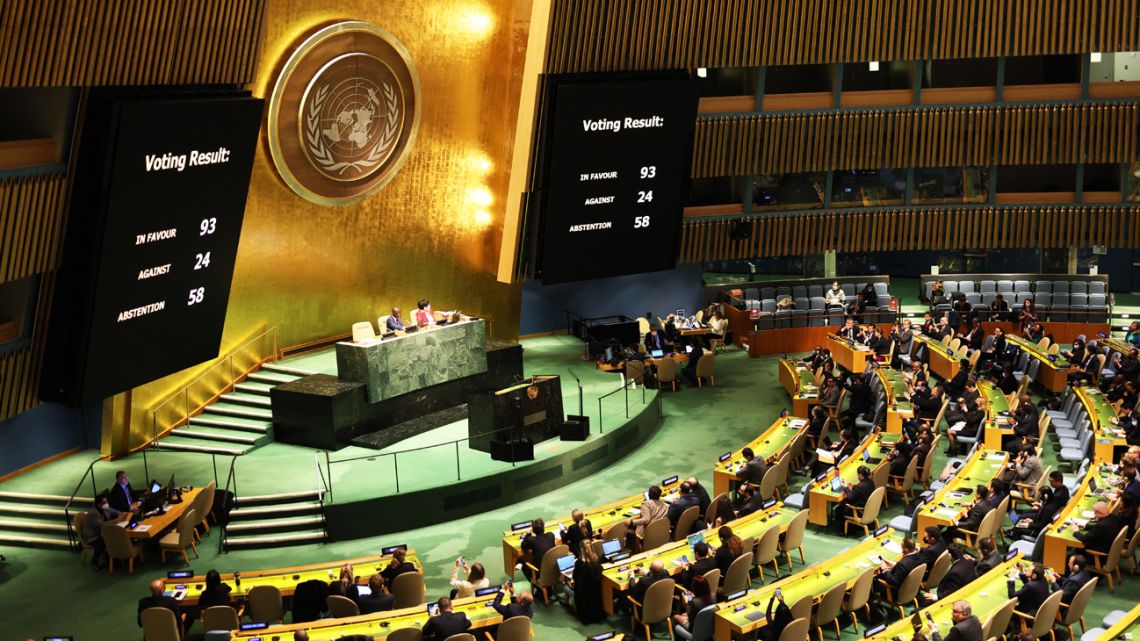 The UN General Assembly has voted to suspend Russia from the world body’s Human Rights Council – currently chaired by Argentina – as punishment for its invasion of Ukraine and the atrocities committed in this country since February 24.

Moscow’s high-profile rebuke marked only the second suspension of a country from the Council – Libya was the first, in 2011 – and it has earned praise from Ukrainian President Volodymyr Zelensky and other world leaders.

A two-thirds vote of the General Assembly was required to suspend Russia’s membership of the UN Human Rights Council and this was concluded, although the decision is subject to corresponding review.

Argentina was among 93 countries that voted in favor of the resolution suspending Russia from the Human Rights Council “for serious and systematic violations of these rights” and “violations of international humanitarian law” committed by the Federation of Russia during its invasion of Ukraine, expressing “grave concern” by government officials.

A total of 58 nations abstained and 24 UN members voted against, including three Latin American countries: Bolivia, Cuba and Nicaragua, historical allies of Vladimir Putin’s government. Venezuela, which lost its right to vote due to arrears with the UN, but called for a vote against. Elsewhere on the continent, Brazil, Mexico and El Salvador abstained.

Other countries voted against China, a Moscow ally that has stubbornly refrained from criticizing the invasion, and Iran, as well as Russia itself, Belarus and Syria.

Russia’s suspension bars it from speaking or voting in the UN body, although its diplomats can still attend proceedings.

“They will probably still try to influence the Council through their representatives,” said a Geneva-based diplomat.

Earlier in the week, Foreign Ministry sources told reporters that Argentina would join the vote to suspend Russia, citing its military invasion of Ukraine in general and shocking images of an alleged massacre. in Bucha in particular with hundreds of corpses found in a mass grave outside that town, all shot in the back of the head.

Ministry sources said Foreign Minister Santiago Cafiero was instructed to do so by President Alberto Fernández himself.

The Fernández government had previously condemned the invasion of Ukraine at the UN on March 1, calling on Russia “to immediately cease the illegitimate use of force, as well as military operations on Ukrainian territory.”

In a searing statement, US President Joe Biden reacted to the expulsion saying it confirmed Moscow as an “international pariah”. He denounced “horrible” images of Ukrainian towns like Bucha, where Russian forces are accused of atrocities against civilians.

“Russia’s lies are no match for the undeniable evidence of what is happening in Ukraine,” the US leader said. “The signs of people being raped, tortured, executed – in some cases their bodies desecrated – are an outrage to our common humanity.”

Zelensky, who has long called for a tougher international stance against Moscow, applauded the UN decision as “an important step”, describing it on Twitter as “another punishment for [Russia’s] aggression” against Ukraine.

Russia quickly rejected the suspension, with the Foreign Ministry in Moscow calling the move “illegal and politically motivated, ostensibly aimed at punishing a sovereign UN member state that pursues an independent domestic and foreign policy.”

The United Nations Human Rights Council was founded in 2006 and is made up of 47 member states chosen by the General Assembly.

Washington argues that Russia’s suspension from the Geneva-based organization that is the UN’s top human rights watchdog is more than symbolic and in fact intensifies Russia’s isolation after the assault on the Ukraine which began on February 24.

Zelensky also called for Russia’s expulsion from the UN Security Council “so that it cannot block decisions regarding its own aggression, its own war”.

Washington has admitted that no one can do anything about Russia’s position in the Security Council, where it holds veto power.

The world has been outraged by images of civilians apparently executed and left on the streets or buried in mass graves in areas once controlled by Russian troops. The carnage has led to new rounds of sanctions against Moscow.

Journalists, including from AFP, found dead bodies in civilian clothes, some with their hands tied, in the town of Bucha outside the capital kyiv last weekend.

The Kremlin denied that Russian forces killed civilians and alleged that images of corpses at Bucha were “fakes”.

The week in high school sports: NIL, huge coaching changes and All-Stars on the move