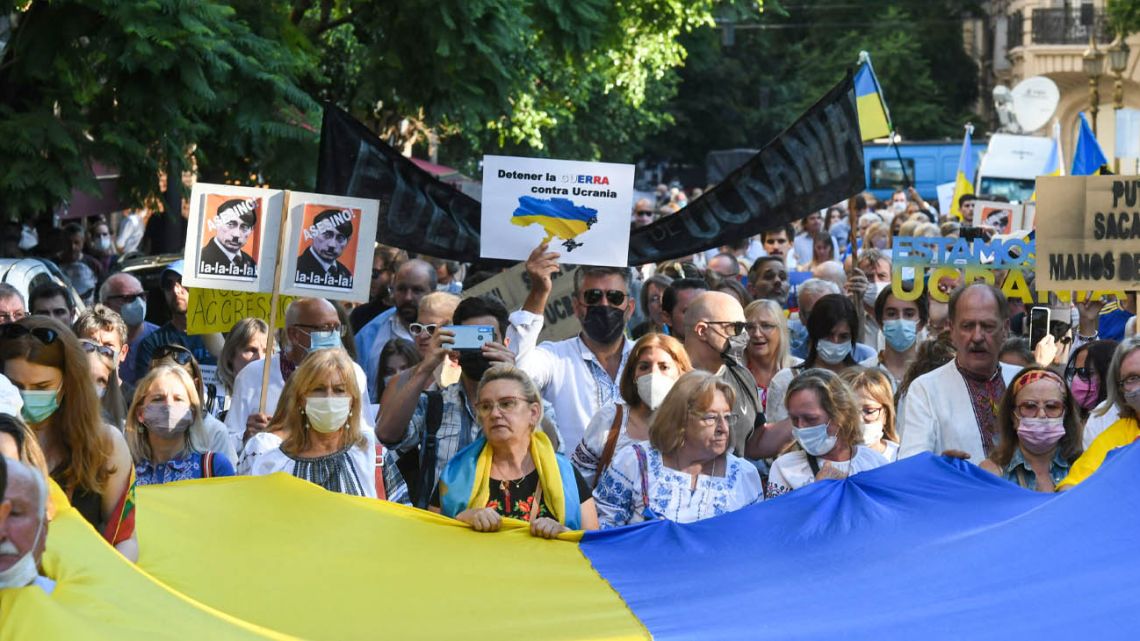 Buenos Aires Weather | What We Learned This Week: February 19-26

The Argentine government on Thursday expressed its “firm rejection of the use of armed force” in Ukraine, calling on Russia “to refrain from any military action” while recommending that all Argentines in the country at war leave. The Foreign Ministry statement stressed the need for “full respect for international law… the sovereignty of States and their territorial integrity”, insisting that “just and lasting solutions can only be found through dialogue”. Presidential spokeswoman Gabriela Cerruti added: “We are not going to support any war started by any country in any part of the world.” Meanwhile, in New York, Argentina’s alternative representative to the United Nations, Fabián Oddone, echoed his government’s “concern” and “alarm” over the crisis, also calling for “constructive dialogue”. Ex-president Mauricio Macri also condemned “a flagrant violation of the territorial integrity of an independent nation… with unforeseeable consequences”. The city’s mayor, Horacio Rodríguez Larreta, repudiated the Russian attack on Ukraine while celebrating government statements along the same lines, adding that territorial integrity was one of the principles underlying the demands of Argentine sovereignty over the Falklands and expressing its “solidarity with the huge Ukrainian community in our country”. But the town hall’s international relations secretary, Fernando Straface, took a tougher view of the national government’s handling of the situation, accusing it of running behind events and castigating the recent “untimely” presidential visit. in Russia as well as statements of support for Russian President Vladimir Putin.Finally, the President of Congress, Sergio Massa, did better than the national government by “condemning” the Russian invasion of Ukraine.

The governor of Corrientes, Gustavo Valdés, said on Thursday that the area burned in his province had shrunk by 30% in recent days thanks to the rain, although more was needed. Nearly 800,000 hectares, or almost 9% of the provincial territory, have been ravaged by fire this summer, including almost 40% of Iberá National Park. Meanwhile, the courts of Corrientes are investigating 75 arson charges across the province, estimating that almost half of the fires were started intentionally (often for agricultural purposes). Finally, social media influencer Santiago Maratea, 29, caught some media attention by raising 100 million pesos in a fundraiser to help local firefighters.

NO DEAL – FOR NOW

Last-minute hopes of the deal between the government and the International Monetary Fund (IMF) entering Congress before the long weekend for the start of Carnival were expiring yesterday at press time, but the Speaker of the Lower House, Sergio Massa, opened the possibility of pressing him in front of the president. Alberto Fernández delivers his State of the Nation address at the opening of regular sessions next Tuesday. The presence of Economy Minister Martín Guzmán in Congress to give full details of the agreement has not yet been confirmed. While March 22 is the deadline for the next major payment to the IMF, parliamentary sources point out that there is also a grace period, during which sufficient support for approval within a Frente de Split todos can be searched.

The economy grew 10.3% last year, Argentina’s highest growth rate since 1965, ending a three-year negative streak and offsetting a minus 9.9% fall in 2020 due to the Covid-19 pandemic, the INDEC national statistics office announced. last Wednesday.

The parallel “blue” dollar closed the week yesterday at 211 pesos, exactly the same level as the previous Friday. Meanwhile, the official exchange rate rose during the week from 112 to 112.50 pesos yesterday, as quoted by Banco Nación, or 186 pesos if the 65% surcharges for savers are added. The parallel but legal exchange rates of the CCL (contado con liquidation) and Member of the European Parliament (electronic means of pages) continued to fall, the first clearly below the level of 200 pesos at 199.68 pesos against 207.58 pesos the previous Friday while the second (already below 200 pesos at the start of the week at 199.72 pesos) still has dropped to 195.31 pesos yesterday. Country risk resumed an upward trajectory after falling for most of the month, rising from 1,758 points to 1,777 points at the end of last week.


THE CORONAVIRUS WEEK
There were a total of 125,958 deaths and 8,887,973 confirmed cases of coronavirus contagion at press time yesterday, compared to 125,062 deaths and 8,815,247 confirmed cases the previous Friday. City Hall Health Minister Fernán Quirós summed it up pretty well at a press conference on Thursday when he said that “the Omicron curve is more or less running out of steam” and that “we are entering in a transition zone, coming out of a pandemic”. and heading towards endemic” after almost 13,000 people have died in this city in the past 23 months with almost a third of the population infected. Nearly 7.5 million doses of the vaccine have been administered, with 58% of the population having received a booster dose while 91% have been vaccinated with a double dose, he added.

The return of the school year last week included the announcement by the city’s mayor Horacio Rodríguez Larreta of the creation of six bilingual schools teaching certain subjects completely in English with the objective of adding more in the next few years. years.

In the latest scoop from a global network of more than 160 investigative journalists, leaked data on more than 18,000 accounts at Swiss bank Credit Suisse shows that dozens of criminals, dictators, intelligence agents and corrupt politicians have accumulated over $8 billion in ill-gotten gains. earnings. The Argentinians seem to occupy a less prominent place this time around than in previous scoops such as Panama or Pandora Papers. The report also criticized the Swiss government for “doing everything possible to protect (these accounts)”. Credit Suisse is the second largest bank in Switzerland with nearly 50,000 employees, 1.5 million customers and 1.5 trillion Swiss francs in deposits. Former bank workers have claimed that when they tried to perform due diligence on these accounts, their bosses told them to look away.

The families of the victims of the 2012 Once train disaster marked its 10th anniversary last Tuesday by demanding that officials whose corruption and negligence were responsible for the tragedy serve their full prison sentences (instead of being assigned residence in most cases) while complaining about the delays in passing legislation granting them economic compensation. “The state itself played a central role in the motives for the disaster, neglecting us ever since,” said the final statement, read by María Luján Rey, the mother of one of the 52 fatal victims and today national deputy of the PRO center. -good game.

The rowdy trade unionist Juan Pablo “Pata” Medina was briefly arrested last Tuesday for creating a row at the Italian hospital in La Plata, capital of the province of Buenos Aires, but was released the same evening. Medina, who is facing a money laundering trial, claimed his family’s lives were in danger because of rival Iván Tobar of the construction workers’ union UOCRA, whom he also accused of drug trafficking . Covered in eggs and insults by Tobar’s supporters when he arrived at the hospital, an enraged Medina punched one of the 50 police guarding him, prompting his arrest.

A drug gang released from prison is suspected of being linked to tainted cocaine that killed 24 people in Greater Buenos Aires earlier this month, federal prosecutor Paul Starc told the TN news channel on Wednesday. last, referring to the Mamluks gang led by Miguel’Mameluco‘ Villegas who is currently serving a 27-year prison sentence. Eight people have already been arrested in the case but forensic analysts now believe the drugs sold by drug dealer Joaquín’ElPaisa‘ Aquino, the original suspect, had nothing to do with the cocaine killer. According to Security Minister Aníbal Fernández, Wednesday’s slum raids resulted in 17 arrests as well as the confiscation of huge amounts of drugs and at least seven firearms.