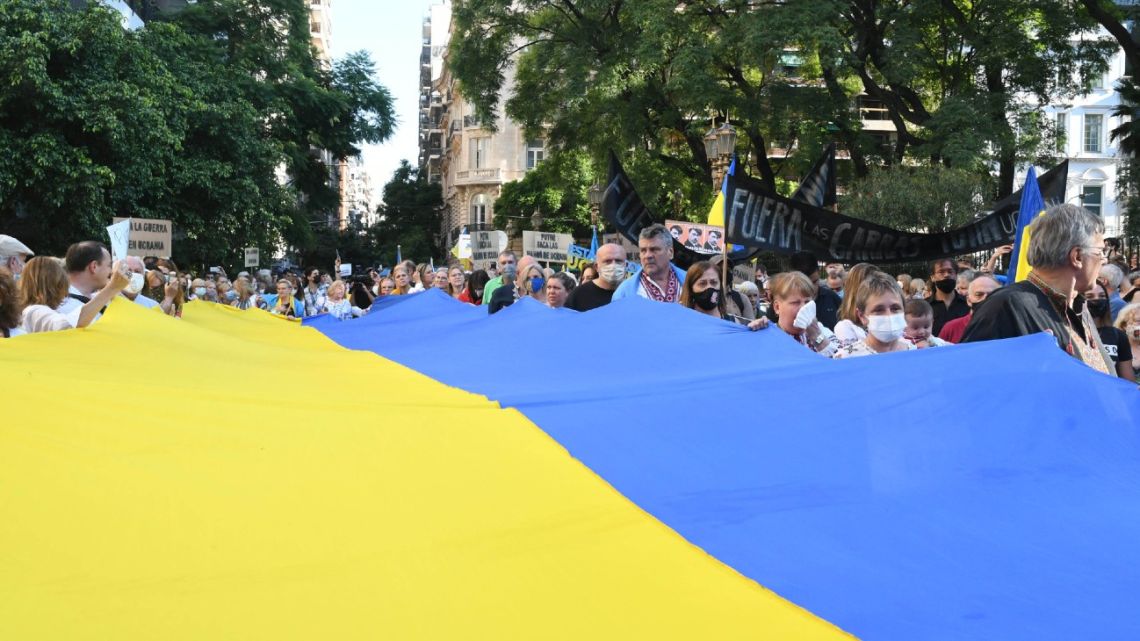 Around 2,000 members of Argentina’s large Ukrainian community marched in Buenos Aires on Friday to demand the withdrawal of Russian forces.

Shouting “Putin is a murderer” and calling for “a ceasefire and the unconditional withdrawal of the forces that invaded our country”, the protesters called for greater support from the international community.

“We demand the immediate withdrawal of Russian troops from the sovereign territory of Ukraine,” the leaders of the Ukrainian Central Representation in Argentina (RCUA), where nearly 500,000 members of the Ukrainian community live, said in a petition that they attempted to hand over to the Russian Embassy.

Children and grandchildren of Ukrainians who arrived in the country at the end of the 19th century, as well as more recent arrivals, marched carrying two long Ukrainian flags, singing the Ukrainian national anthem and chanting in their native language slogans such as “Glory to Ukraine, glory to its heroes”, “Ukraine first” and “Freedom to Ukraine”.

“Russians and Ukrainians have a lot in common. My main feeling is anger. What I least imagined is that the Russians would kill my people,” said Tetiana Abramchenko, a 40-year-old Ukrainian who arrived with her 19 year old son. daughter in Argentina in 2014 after Russia annexed Crimea, struggling to hold back tears.

Tetiana, married to an Argentinian and originally from a small town near Poland – whom she has avoided identifying for fear, she says, of Russian reprisals against her family – believes that “Ukrainians will never forgive the Russians “the deaths caused by the territorial dispute that began eight years ago.

About 20 Russians living in Argentina took part in the demonstration, holding signs reading “Putin terrorist” and shouting “No to war” in their own language.

“They [Ukrainians] sleeping in the basement, cold. The old, the sick, the little ones crying, losing their homes and seeing blood. I can’t believe that in our time, brothers kill brothers. I can’t believe it,” said Nadia Pashanova, 60, who has lived in Argentina since 1999.

The leaders of the demonstration of the Ukrainian community, one of the oldest and largest in Latin America, expressly thanked through their leaders the support for their government from countries such as the United States, the UK and Canada.

So far, the government of President Alberto Fernández has demanded that Russia “put an end to military actions in Ukraine, has expressed its “firm rejection of the use of armed forces”, while advocating respect for “the sovereignty of States and their territorial integrity” and calling for an immediate dialogue that would allow a “peaceful solution” to the conflict.

“We expected better,” said neurosurgeon Pedro Lylik, president of the RCUA, after the event outside the Russian Embassy, ​​which ended with a performance of the Argentine national anthem.

Buenos Aires Weather | What We Learned This Week: February 19-26