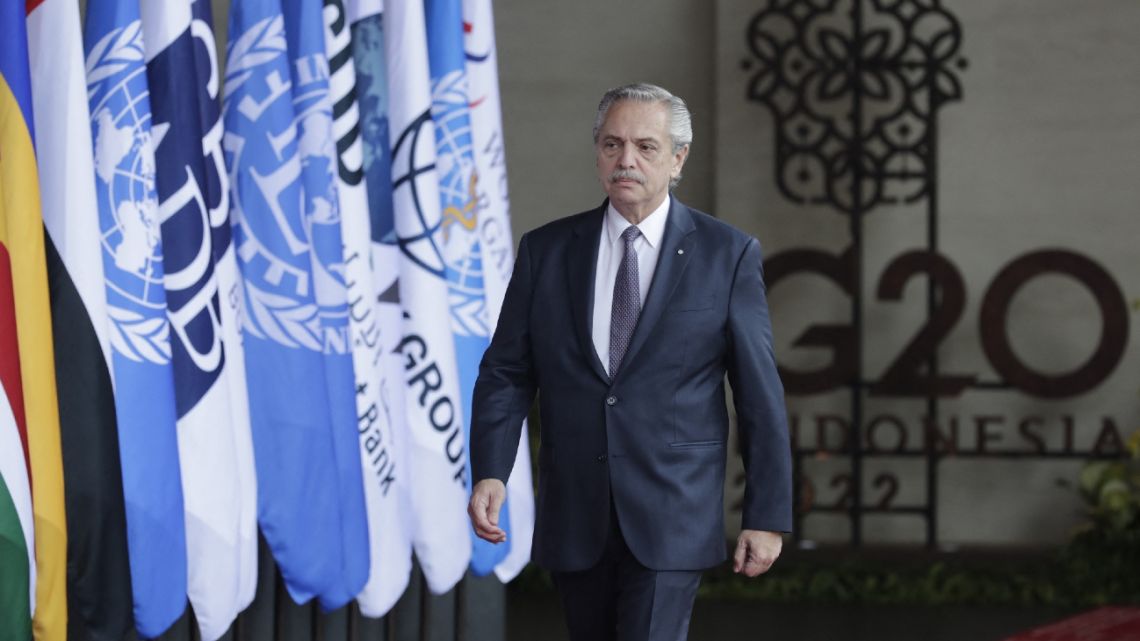 “I thought you fell asleep but you kept talking,” the Spanish leader later told the president about the decompensation he suffered, for which he had to be taken to hospital in Bali.

Alberto Fernández admits that he has had a problem with erosive gastritis for a long time, which he solves with Uvasal whenever he feels a burning sensation in his stomach. “I felt a drop in pressure,” he told the doctor accompanying him in the delegation that arrived in Indonesia on Monday afternoon local time.

At the time, he was alone with Walter Kerr, his translator. Foreign Minister Santiago Cafiero and Economy Minister Sergio Massa were waiting for him in the meeting room where the president was to deliver his first speech. He has not arrived. When officials decided to ask what was going on, the episode was explained. As per protocol, Cafiero stepped in to read the Peronist leader’s speech.

Fernández arrived at the hospital by ambulance. There he underwent an endoscopy and blood tests. The doctor who accompanied him, Manuel Estigarribia, closely monitored his condition. Reviewing the medical episode of the president, Massa detailed the intimacy of the exchanges within the entourage. At breakfast, as they were chatting, the economy minister touched the president’s arm and noticed that it was cold and clammy. “Are you doing OK?” He asked him. The president replied that he was, and they left in separate cars for the summit.

In the end, the head of state had to suspend four activities planned for Tuesday: the two sessions during which he was to speak, a lunch with world leaders and a dinner. Nevertheless, he decided to leave the hospital and go straight to the bilateral meeting with Chinese Premier Xi Jinping. There were important announcements to be made and he could not delay them: Argentina had obtained a currency swap extension for $5 billion and China’s commitment to disburse, before the end of the year, the debt it owed for the construction of the Néstor Kirchner and Jorge Cepernic dams in the province of Santa Cruz.

At the end of the meeting, which lasted 20 minutes, the president went to the hotel where he is staying. Upon arrival, he spoke to reporters covering the tour, then returned to his room to rest. “I’m fine, I’m working well,” Fernández said. In the meantime, he spoke with his partner Fabiola Yáñez. It was Julio Vitobello, the presidential chief of staff, who told the first lady what was happening, a few minutes before the publication of the first medical report.

The most salient political fact of this episode is that, thanks to his turn, the president has renewed the dialogue with his vice-president. Cristina Fernández de Kirchner called him when she found out what was going on. They had not spoken since September 2, when the head of state visited him in his apartment, the day after the failed assassination attempt.

Tuesday evening, the Head of State dined in his room while his entourage ate at the El Patio restaurant in the hotel where they stayed. The first to sit at the table were Vitobello, followed by Cafiero, Juan Manuel Olmos, Gabriela Cerruti, Jorge Argüello and Energy Secretary Flavia Royón. Massa joined them later. Fernández did not leave his room, as instructed by the Presidential Medical Unit.

On Wednesday, the second and last day of the summit, Fernández decided to keep the meetings with Kristalina Georgieva and Pedro Sanchez on the agenda. However, Cafiero and Massa attended a meeting with representatives of Saudi Arabia and another meeting with German Chancellor Olaf Scholz.

A few hours later, the team left Bali for a stopover in Madrid, Spain, before returning to Buenos Aires. The president’s state of health, while complicating plans, has not altered the flight schedule, nor has it prevented a satisfying overseas jaunt for Argentina’s foreign service.