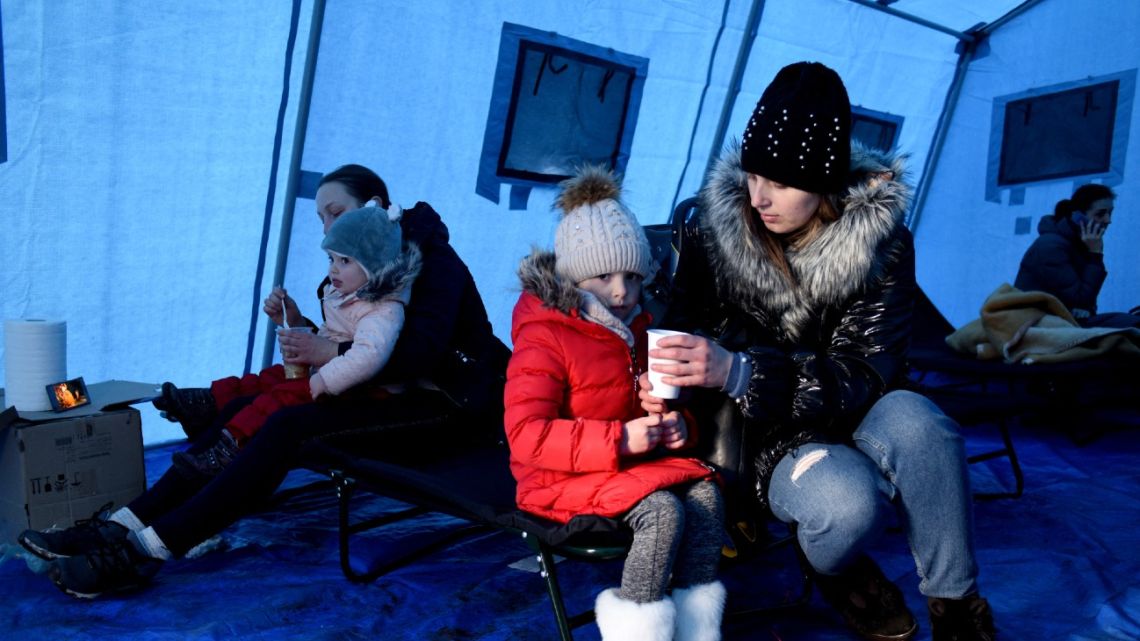 One million refugees have fled Ukraine in the week following the Russian invasion, the UN refugee agency said on Wednesday.

“In just seven days, we have witnessed the exodus of one million refugees from Ukraine to neighboring countries,” tweeted the United Nations High Commissioner for Refugees, Filippo Grandi, while urging “arms to shut up” in the country.

The head of the UN refugee agency plans to travel in the coming days to Romania, Moldova and Poland, three of the countries hosting the influx of refugees.

According to Polish border guards, more than half a million people entered the country from Ukraine as of 3:00 p.m. local time (11:00 a.m. Buenos Aires) on Wednesday.

A UN toll not updated since Tuesday also shows that more than 115,000 people have fled to Hungary and around 80,000 to Moldova.

This week, UNHCR launched an emergency appeal for $1.7 billion to help people exiled or displaced by the conflict in Ukraine.

According to its estimates, 12 million people in the country and another four million who have fled abroad will need protection and assistance in the coming months.

Earlier in the day, the United Nations General Assembly on Wednesday overwhelmingly passed a resolution that “demands” that Russia withdraw “immediately” from Ukraine, in a powerful rebuke to Moscow’s invasion by a large majority of the nations of the world.

After more than two days of extraordinary debates, which saw the Ukrainian ambassador accuse Russia of genocide, 141 of the 193 UN member states voted for the non-binding resolution.

“The world rejects Russia’s lies,” US President Joe Biden said in a statement on Wednesday. “Russia is responsible for the devastating human rights abuses and international humanitarian crisis we are watching unfold in Ukraine in real time.”

China was among 35 countries that abstained, while only five – Eritrea, North Korea, Syria, Belarus and of course Russia – voted against.

The resolution “deplores” the invasion of Ukraine “in the strongest terms” and condemns President Vladimir Putin’s decision to put his nuclear forces on high alert.

The vote had been touted by diplomats as an indicator of democracy in a world where autocracy is on the rise, and came as Putin’s forces stalked Kiev as terrified Ukrainians fled.

“They have come to deprive Ukraine of the very right to exist,” Ukrainian Ambassador Sergiy Kyslytsya told the assembly ahead of the vote. “It’s already clear that Russia’s goal is not just occupation. It’s genocide.”

Putin launched the full-scale invasion of Ukraine on February 24. Moscow pleaded “self-defence” under Article 51 of the United Nations Charter. But this has been categorically rejected by Western countries who accuse Moscow of violating Article 2 of the Charter, demanding that UN members refrain from resorting to the threat or use of force to resolve a crisis.

European Union Ambassador to the UN Olof Skoog said the vote was “not just about Ukraine”.

“This is about defending a rules-based international order to which we have all subscribed,” he said in a statement.

“Ending hostilities in Ukraine – now. Silencing the guns – now,” he said in a statement.

“As bad as the current situation is for Ukrainians, it threatens to get worse. The countdown is a ticking time bomb.”

Some delegations chose to place stuffed animals on their tables during the session – a stark visual reminder of the devastating impact of the conflict on children.

Russia seizes the city of Kherson

Russian forces have taken the Ukrainian city of Kherson, local officials confirmed Wednesday evening, the first major urban center to fall since the invasion of Moscow a week ago.

“The [Russian] the occupiers are all over the city and are very dangerous,” Gennady Lakhuta, head of the regional administration, wrote on the Telegram messaging service on Wednesday evening.

The strategic port city of 290,000 near the Black Sea was besieged as Russian forces continued their offensive in other urban centers.

Another key Ukrainian port, Berdyansk, has already been seized by Russian troops, while Mariupol repelled the attacks “with dignity”, according to that city’s mayor, Vadim Boichenko.

Russian forces also shelled Ukraine’s second-largest city, Kharkiv, prompting comparisons with the massacres of civilians in Sarajevo in the 1990s.

After days of heavy fighting, hundreds of civilians have been killed since the invasion began, triggering punitive Western sanctions meant to cripple Russia’s economy.