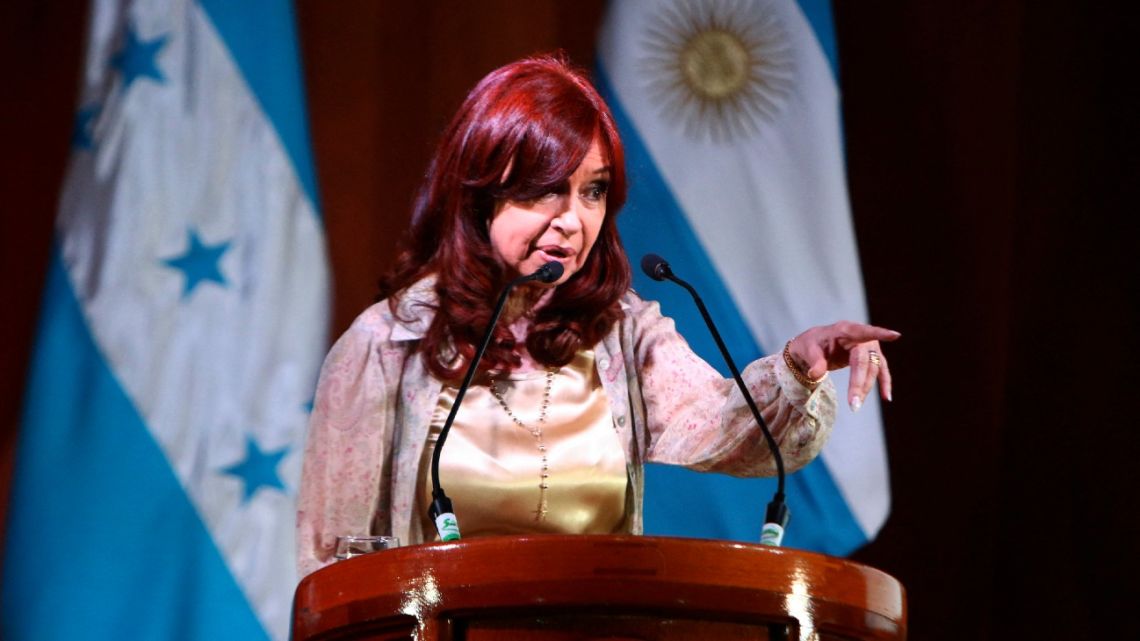 Cristina Fernández de Kirchner gave a fiery lecture at a university in Tegucigalpa on Wednesday, denouncing “judicial coups” in Latin America and hailing her leftist “comrades” across the continent.

Speaking as part of her official visit to the country to mark the inauguration of Honduran President-elect Xiomara Castro, Argentina’s vice president unleashed ‘neoliberals’ as she addressed a guest audience at the ‘Universidad Nacional Autónoma in the Honduran capital, delivering a speech at an event titled ‘Los pueblos siempre vuelven‘ (“People always come back”).

Deploying fierce rhetoric that explicitly criticized the actions of the Organization of American States (OAS) and implicitly of the United States, the Argentine vice president lambasted “neoliberal austerity policies” as she launched a defense of the role of the state in the region.

Many of his comments could be interpreted through the prism of Argentina’s ongoing attempt to restructure its $44 billion debt to the International Monetary Fund. President Alberto Fernández’s government is seeking a new funding deal that will allow it to extend repayment terms, although talks are currently stalled as the two sides disagree over the size of the budget shortfall. of the country in the years to come.

Upon her arrival in Honduras, Cristina Fernández de Kirchner expressed her joy at meeting “her dear comrades,” a reference to a number of Latin American left-wing leaders who traveled to Central America to attend the event.

The former president, who led Argentina from 2007 to 2015, also praised her host, whom she has known since 2009 when Manuel Zelaya, Castro’s husband, was ousted during a a controversial coup.

At that time, the Argentine leader unsuccessfully tried with other leaders in the region to prevent Zelaya’s removal from office. even attempting to land at Tegucigalpa airport, but the military who had organized the coup blocked the runway and the plane had to turn back.

In a thinly veiled critique of the OAS’s role, she argued that in 2009 the body was “taking the lead in defending democracies in Latin America, not overthrowing them.”

Addressing the challenges ahead of Castro, Fernández de Kirchner warned the Honduran leader that governing her country would be “very difficult”. She called on the country to “help her a lot because she has a doubly difficult task ahead of her as a woman”, pointing out that onlookers will “forgive her much less than men” because of “a certain resentment of patriarchal society”.

Nevertheless, the vice president said she was “absolutely convinced” that Castro “will emerge victorious” and lead Honduras to a bright future.

Presenting Castro’s electoral victory as a return to power similar to that of the Movement to Socialism (MAS) party in Bolivia under President Luis Arce, after a civic-military coup toppled Evo Morales in November 2019, the Argentine leader said that “the people always come back and they never do it the same way or with the same leaders,” she said. “The names and the protagonists change but the objective is always the same: the self-determination of the people.

During her speech, the Argentinian vice president lambasted the ’embassy’ for ‘funding judicial coups in Latin America’, comparing it to similar 20th-century coups by military officers “educated at the School of the Americas in Panama”. .”

“We no longer need military coups, now we need to train judges in commissions and forums,” she said.

Warming up to the theme, Fernández de Kirchner said: “They are the same financiers. They are once again trying to install neoliberalism in the region. Neoliberalism advocates the shrinking of the state. currents have emerged that call themselves libertarian and want to abolish the state.

The former president argued that “when the state cannot generate well-paid work and access to housing and health through active policies, drug traffickers appear”.

“What a contradiction! Those who say we have to adapt [i.e. adopt austerity measures] and shrink the state and then come and say we have to fight drugs,” she said.

In comments that alluded to ongoing talks between Argentina and the IMF without naming them, she added: “In a meeting we had with another president from the region, with [ex-Guatemala president] Álvaro Colom, he said that the narcotics built schools that he couldn’t because he had to enforce the austerity policies dictated by the funds.”