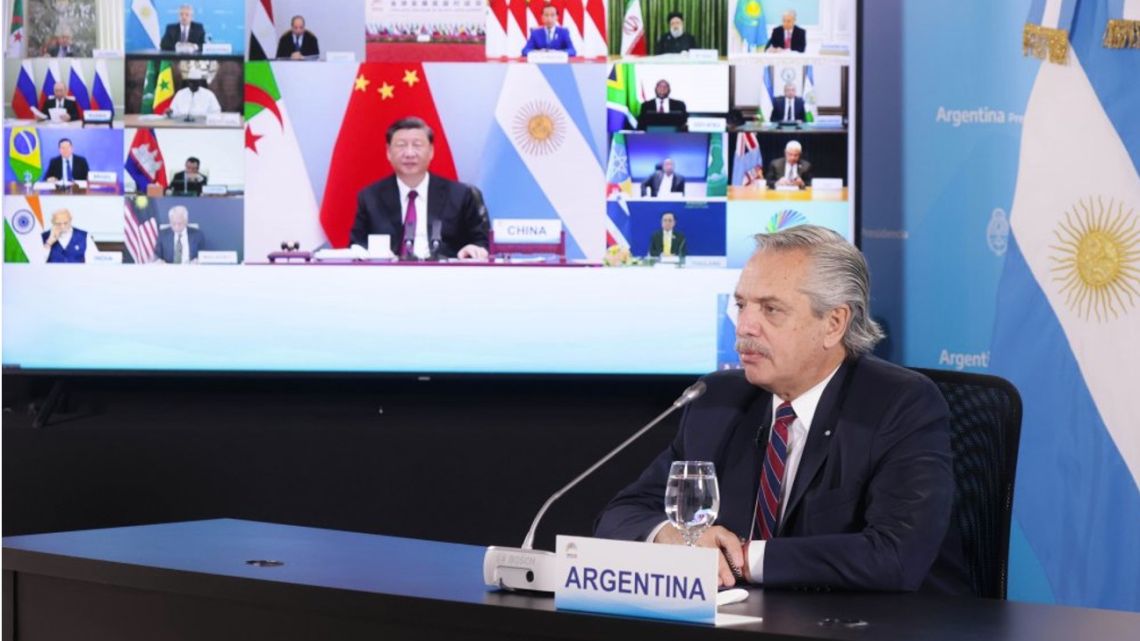 President Alberto Fernández on Friday asked the BRICS group of emerging economies to incorporate Argentina as a full member as he joined the bloc’s 14th summit via video conference.

The Peronist leader said Argentina wanted to join talks on “an agenda for the future” and used his platform to call for changes in how the Monetary Fund’s Special Drawing Rights (SDRs) International (IMF) are allocated.

“We are honored by the invitation to this expanded meeting of the BRICS. We aspire to become full members of this group of nations which already represents 42% of the world’s population and 24% of the world’s gross domestic product,” said President.

BRICS members, made up of Brazil, Russia, India, China and South Africa, represent more than 40% of the world’s population and almost a quarter of the world’s gross domestic product.

Participating virtually in the summit, the Argentinian head of state said on Friday that the group “constitutes a platform with enormous capacities to discuss and implement an agenda for the future that will lead to a better and fairer time. “.

“Argentina wants to join this space and offer its contributions as a member of it,” insisted the president.

In addition to the countries that give their name to the bloc, also participated in the meeting the leaders of Algeria, Abdelmadjid Tebboune; from Egypt, Abdel Fattah El-Sisi; from Indonesia, Joko Widodo; from Kazakhstan, Kassym-Jomart Tokayev; from Senegal, Macky Sall; from Uzbekistan, Shavkat Mirziyoyev; from Cambodia, Hun Sen; from Ethiopia, Abiy Ahmed Ali; from Fiji, Josaia Qureque Bainimarama; from Malaysia, Ismail Sabri Yaakob; and from Thailand, Prayut Chan-o-Cha.

In front of the heads of state, Fernández asked the members to “agree on a common agenda” which would allow this group of countries to more effectively express their “concerns at the next meeting of the G20”, which will be held in Indonesia next November.

He also stressed that “the institutional and economic weight of the BRICS can become a factor of financial stability” and considered that “the expansion of [the bloc’s] The new development bank can be a useful instrument to strengthen national infrastructures.”

“It is time to explore cooperation mechanisms, such as the currency swap that Argentina has signed with China,” the president continued. “It is time to promote the creation of an international risk rating agency, which would put back into the hands of the public what is today in the hands of private interests.

Addressing the reform of the IMF, the Argentinian leader called for a “debate [of] the guidelines that determine the general allocation of special drawing rights”, describing them as “essential tools” for the “necessary capitalization of regional development banks”.

In a statement issued after the two-day summit, held against the backdrop of Russia’s war in Ukraine, the BRICS countries called for new talks between Moscow and Kyiv.

Three members – China, India and South Africa – abstained from voting on a United Nations resolution condemning the Russian invasion, and President Vladimir Putin urged them to snub Western countries appalled by the attack on a European neighbour.

The five countries said in a statement released late Thursday that they “support talks between Russia and Ukraine” but did not chart a course towards an end to the war.

The countries said they had “discussed our concerns about the humanitarian situation in Ukraine and around Ukraine” and expressed their support for international agencies “to provide humanitarian aid”.

The United States and the European Union have slapped Russia with a barrage of sanctions since it invaded Ukraine on February 24. But China and India have tried to stay above the fray, fearful of damaging strong military and trade ties with Moscow.

South Africa, one of the few African countries wielding diplomatic influence outside the continent, has also refused to order Russia to safeguard important economic ties.

China and Russia also touted a “limitless” partnership with President Xi Jinping last week by sending Putin a message of support on “sovereignty and security” issues.

The Russian president on Thursday called on BRICS leaders to work together to compensate for the West’s “selfish actions” and push for a “truly multipolar system of intergovernmental relations.”

Xi said on the eve of the forum on Wednesday that “the Ukrainian crisis is (…) a wake-up call” and called the sanctions a “boomerang and a double-edged sword”.

Addressing the conflict in his own speech, President Fernández said it was “imperative that hostilities in Ukraine cease”.

“We want to be part of the search for a solution that brings all the actors involved together, in order to achieve a lasting peace that leaves behind the dynamics triggered by the escalation of the war for good,” the Argentine leader said.