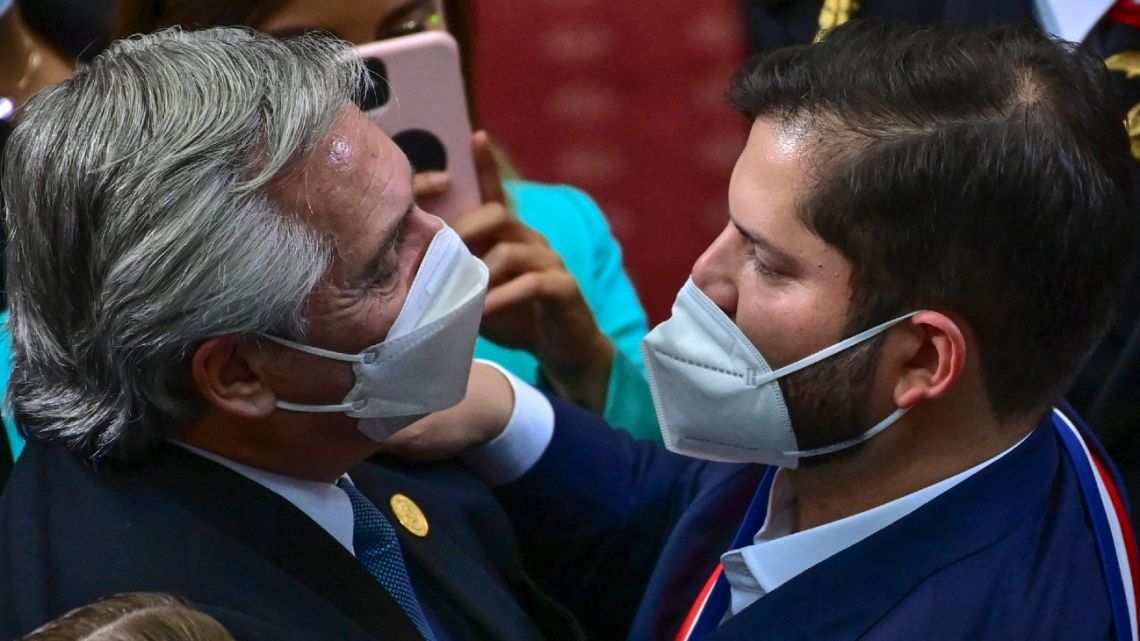 Chile’s new left-wing leader Gabriel Boric makes his first trip abroad as president on Sunday with a visit to Argentina, where he is expected to sign a number of bilateral agreements with his counterpart Alberto Fernández.

Boric travels to Buenos Aires with a large delegation: five of his traveling ministers, including Foreign Minister Antonia Urrejola and Defense Minister Maya Fernández. The presidents of the Senate and the Chamber of Deputies, the president of the Supreme Court and six businessmen from important Chilean professional associations will also make the trip.

“The visit is not only ceremonial, President Boric makes a gesture and leaves with an important entourage. It is the start of a working trip, so it is logical that he leaves with more ministers. is a sign of the importance he gives to the relationship with Argentina,” José Antonio Viera Gallo, who served as Chile’s ambassador to Argentina between 2015 and 2018 under the second presidency of Michelle Bachelet, told AFP.

Boric will meet Fernández privately on Monday at the Casa Rosada, who will then be joined by ministers from both countries to sign agreements on “culture, trade, human rights, energy, gender”, according to a press release from the Chilean government.

He will later meet with the leaders of Argentina’s Congress and the Supreme Court. The day will end with a concert.

On Tuesday, Boric will attend a meeting with some 50 businessmen from both countries, followed by a meeting with Buscarita Roa, the only Chilean member of the human rights group Grandmothers of Plaza de Mayo, and finally with Chilean residents.

Gestures of unity are reciprocal: when Boric was inaugurated as President on March 11 at the Chilean Congress in Valparaíso, Alberto Fernández arrived accompanied by a large entourage of ministers, legislators, governors of provinces bordering Chile, and even renowned artists like Víctor Heredia and Pedro Aznar.

“We have a common vision on many issues and we think the same way,” said Fernández on this occasion, who also underlined the “great expectations” generated by the coming to power of the young Boric.

Figueroa’s appointment has sparked controversy, especially among businesspeople and Chile’s right-wing opposition, who have criticized his lack of diplomatic and political experience to hold such a strategic post.

Meanwhile, Boric has been accused of improvising and appointing ambassadors as a “consolation prize” for leftist politicians who have not been appointed to public office.

“President Boric and Minister Urrejola had to decide that an emblematic place for Chile was Argentina and they appointed a trade union, political and important woman leader,” he added.

Despite the criticism, Boric still confirmed the appointment of the feisty 42-year-old trade unionist, who on Thursday presented her credentials to Argentine Foreign Minister Santiago Cafiero.

“There is no doubt that the Peronist trade union movement is very strong, and Ambassador Figueroa knows them well for their work in the international field of the CUT, and whether they have a relevant role in the internal politics of Argentina , his appointment is also effective,” added Viera Gallo.

President Boric said that this trip to Argentina should not only be “symbolic”, but also result in “concrete collaborations”, such as addressing common borders and bilateral investments, he said during a meeting with the foreign press in Chile in mid-March.

Another relevant issue for bilateral relations is the export of Argentine natural gas to Chile, especially since the government of Buenos Aires approved the sale of 4.23 million cubic meters per day of gas to Chile between January and April, in addition to the six million meters per day of exports already authorized before.

“It is very important for us that Argentina has or maintains the ability to sell natural gas to Chile,” Viera Gallo said.

50 years after returning to Japan, the gap remains between Okinawa and the rest of the country