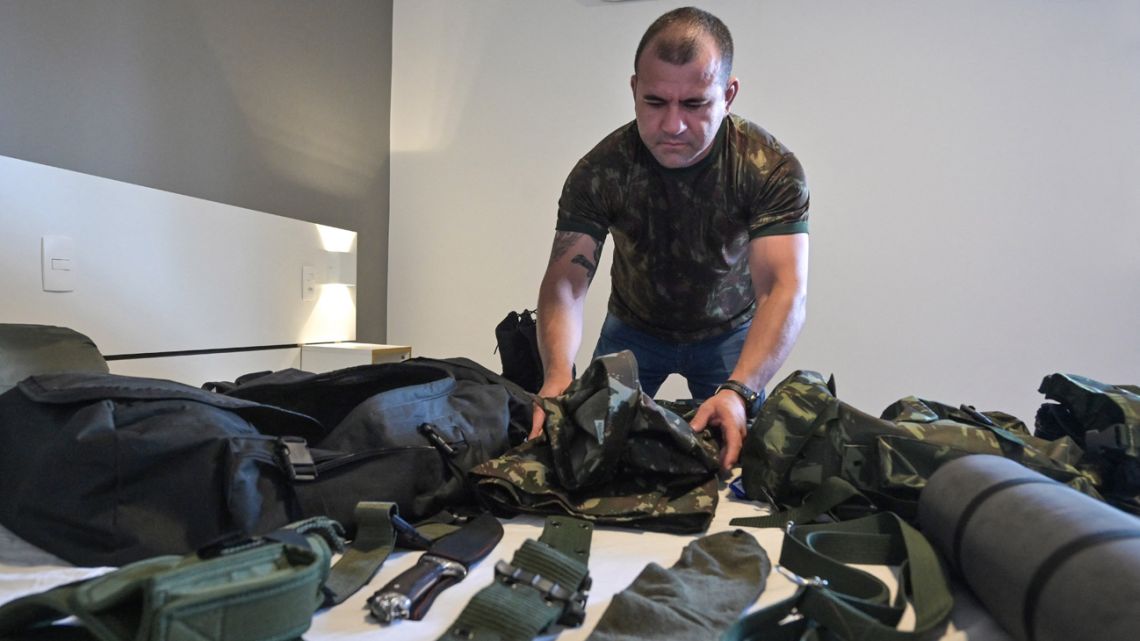 Wearing a camouflage T-shirt that sticks to his biceps, Brazilian policeman Saulo packs his bag with combat boots, camping gear, gun cases and a knife, “just the essentials” to go fight in Ukraine.

The 35-year-old man from São Paulo quit his job as a military police officer to travel more than 11,000 kilometers (nearly 7,000 miles) and join Ukraine’s fight against the Russian invasion.

“I identify with the cause, with the people of Ukraine who suffer injustice from a foreign aggressor,” said Saulo, who asked that his last name not be used for security reasons.

“And I want to help prevent World War III,” he told AFP, laying his short packing list items on his bed next to his black gym bag.

Picking up a small Brazilian flag, he added it to the pile.

Despite President Jair Bolsonaro saying Brazil would remain “neutral” on the conflict – drawing criticism in some quarters – hundreds of Brazilians have taken steps to go fight in Ukraine.

They are seeking to join the 20,000 volunteers from more than 50 countries who have applied to join the International Legion in Defense of Ukraine, a corps launched to help repel the invasion, according to Ukrainian Foreign Ministry figures.

Saulo said goodbye to his partner and two children and left for Poland on Wednesday, where the Brazilians already on the ground promised to help him join the war.

He bought the one-way ticket with his own money.

Saulo said he made his decision after seeing images from Ukraine of bombed residential buildings and hospitals. This convinced him to heed President Volodymyr Zelensky’s call to join the new foreign legion and fight “shoulder to shoulder” with the Ukrainian army.

“There’s a risk I won’t come back. Everyone who goes there knows that. We’re not little kids,” said Saulo, who sports a tattoo of a large black skull on his right arm, a knife between the teeth. .

His only fear, he said, is that the conflict “escalates into nuclear war”.

According to representatives of the fightforua.org website, which helps organize the effort, the only requirement to join the Ukrainian Foreign Legion is military or firearms experience.

Other web pages created for Brazilians who rally to the cause have hundreds of members, such as the Portuguese-language Facebook group “Volunteers to Fight in Ukraine”, which has 1,800 members.

The site is a forum for potential volunteers to exchange information – although members told AFP they were limiting their interactions, fearing Russian spies were watching them.

One volunteer candidate, Guilherme – his name has been changed for security reasons – said he saw going to the front as a way to get a fresh start in life.

The 29-year-old served in the Brazilian army and the French Foreign Legion, then worked as a private security guard in Rio de Janeiro, but is now unemployed.

“Things are difficult here in Brazil,” he said. “Helping Ukraine is an opportunity… We need to think about what we can do to help others in this world, and not just say ‘This is not my war’, because the world is at an end. “

Ukraine’s consul in São Paulo, Jorge Rybka, said potential volunteers received “no help of any kind” from the Ukrainian government.

That hasn’t stopped the Brazilian military veteran, who is already on the ground in the outskirts of kyiv, carrying out patrols and civilian rescue operations alongside the Ukrainian army.

Galvao, 49, came from Estonia, where he lives, to “defend democracy”, he told AFP.

“Since I joined the Ukrainian army, I have been part of this nation and I will defend it until the end,” said the Sao Paulo native, who has two children.

Foreign fighters, he said, “are welcomed here with open arms, happiness and thanks”.

Who will win the battle for padel domination?