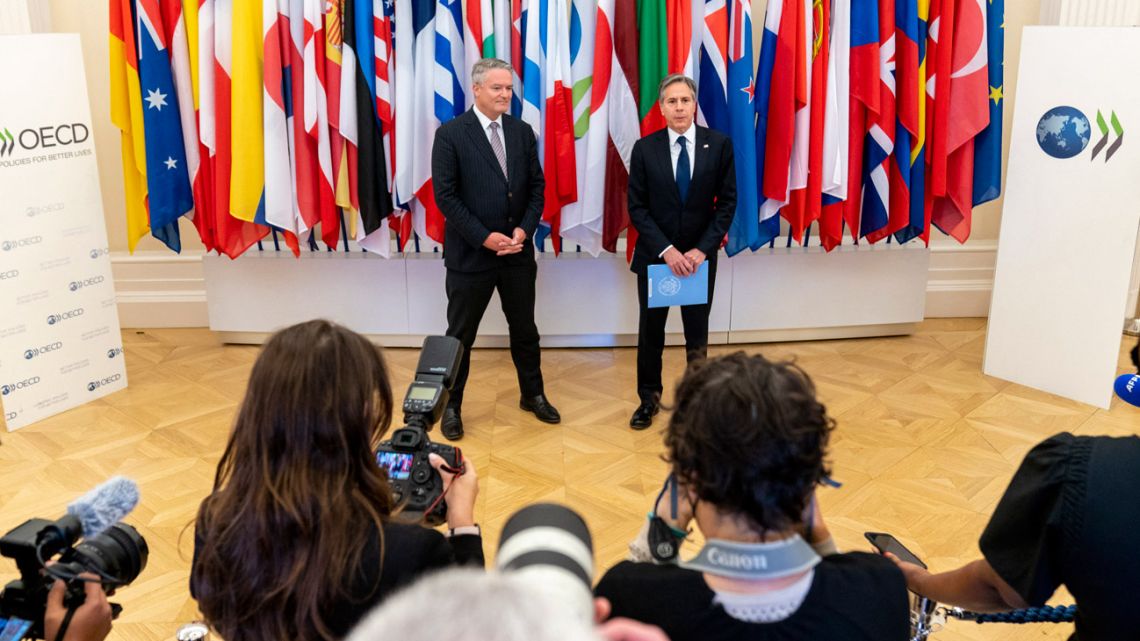 A total of 130 countries, including Argentina, have agreed to global tax reform to ensure multinationals pay their fair share wherever they operate, the OECD said on Thursday, but some EU states refused to sign.

The Organization for Economic Co-operation and Development said in a statement that global companies, including US giants Google, Amazon, Facebook and Apple, would be taxed at a rate of at least 15% once the agreement is implemented. .

The new tax regime is expected to add some US $ 150 billion to government coffers globally once it takes effect, which the OECD hoped to be in 2023.

“The framework updates key elements of the century-old international tax system, which is no longer suited to a globalized and digitized economy of the 21st century,” said the OECD.

The formal deal follows the approval of the G7 rich country group last month, and negotiations now move on to a meeting of the G20 developed and emerging economies group on July 9 and 10 in Venice, Italy.

US President Joe Biden said the latest deal “puts us a striking distance from a comprehensive global deal to stop the race to the bottom for corporate taxes.” US Treasury Secretary Janet Yellet called it “historic.”

Germany, another proponent of tax reform, hailed a “colossal step towards tax justice”, and France said it was “the most important tax deal in a century”.

British Chancellor of the Exchequer Rishi Sunak, whose country holds the presidency of the G7, said that “the fact that 130 countries around the world, including all G20 members, are now on board, marks a new step in the our mission of global tax reform “.

Argentine Economy Minister Martín Guzmán praised the “broad international consensus” which allows “an important step” to be taken in the fight against “tax evasion by multinational companies”.

“Even if there is still a long way to go, we are facing a historic moment; a real opportunity to coordinate at the global level and to put an end to tax havens which harm the peoples of the world and their development possibilities” , underlined the minister.

Guzmán said the 15 percent rate “is still lower than what we consider optimal”, but that Argentina has decided to support the consensus agreement.

“In the interest of all”

However, not everyone agrees with the deal. Ireland and Hungary, a low-tax European Union country, have refused to sign the agreement reached within the framework of the OECD, the organization said, highlighting persistent divisions over global taxation.

The two countries are part of a group of EU countries also including Luxembourg and Poland that have relied on low tax rates to attract multinationals and grow their economies.

Ireland, the EU home to tech giants Facebook, Google and Apple, has a corporate tax rate of just 12.5%.

Irish Finance Minister Paschal Donohoe has warned that the new rules could cost Ireland 20% of its business income.

On Thursday, Donohoe said Ireland still “broadly supports” the deal, but not the 15 percent tax floor.

“Much remains to be finalized before a comprehensive agreement is reached,” he said, adding that Ireland “would engage constructively” in further talks.

An implementation agreement is scheduled for October.

Nine of the 139 participants in the talks have yet to sign the agreement.

But China, whose position was closely watched as it offers tax incentives to key sectors, approved the deal.

“It is in everyone’s interest that we reach a final agreement among all members of the Inclusive Framework as planned later this year,” said OECD Secretary-General Mathias Cormann.

“This package does not eliminate tax competition, as it should not, but it sets multilaterally agreed limits on it,” Cormann said, adding that “it also takes into account the various interests at the negotiating table. , including those in small economies and developing jurisdictions “

CFOs have called a minimum tax necessary to stem competition between countries over who can offer multinationals the lowest rate.

For Biden, a global tax deal will help keep the United States competitive as he proposed to raise domestic corporate taxes to pay for an infrastructure and jobs program costing around $ 2 trillion. of dollars.

The US president – whose tax plans face a potentially uphill battle in Congress – hailed an “important step in developing the global economy to be fairer for middle-class workers and families in the United States. United States and around the world ”.

He noted that the nations that signed represent more than 90 percent of the global economy.

The OECD statement said the package “will provide much needed support to governments that need to raise the necessary revenues” to set their budgets and invest in measures to support the post-Covid recovery.

Oxfam, a charity, meanwhile said the deal fell short of the level of taxation needed to give poorer countries a sufficient share of additional tax revenue.

Calling the deal “biased towards the rich and completely unfair”, Oxfam said the signatories missed a “unique opportunity to build a profoundly more equal world”.

From Blackburn to Brazil: Ben Brereton shines for Chile in Copa America