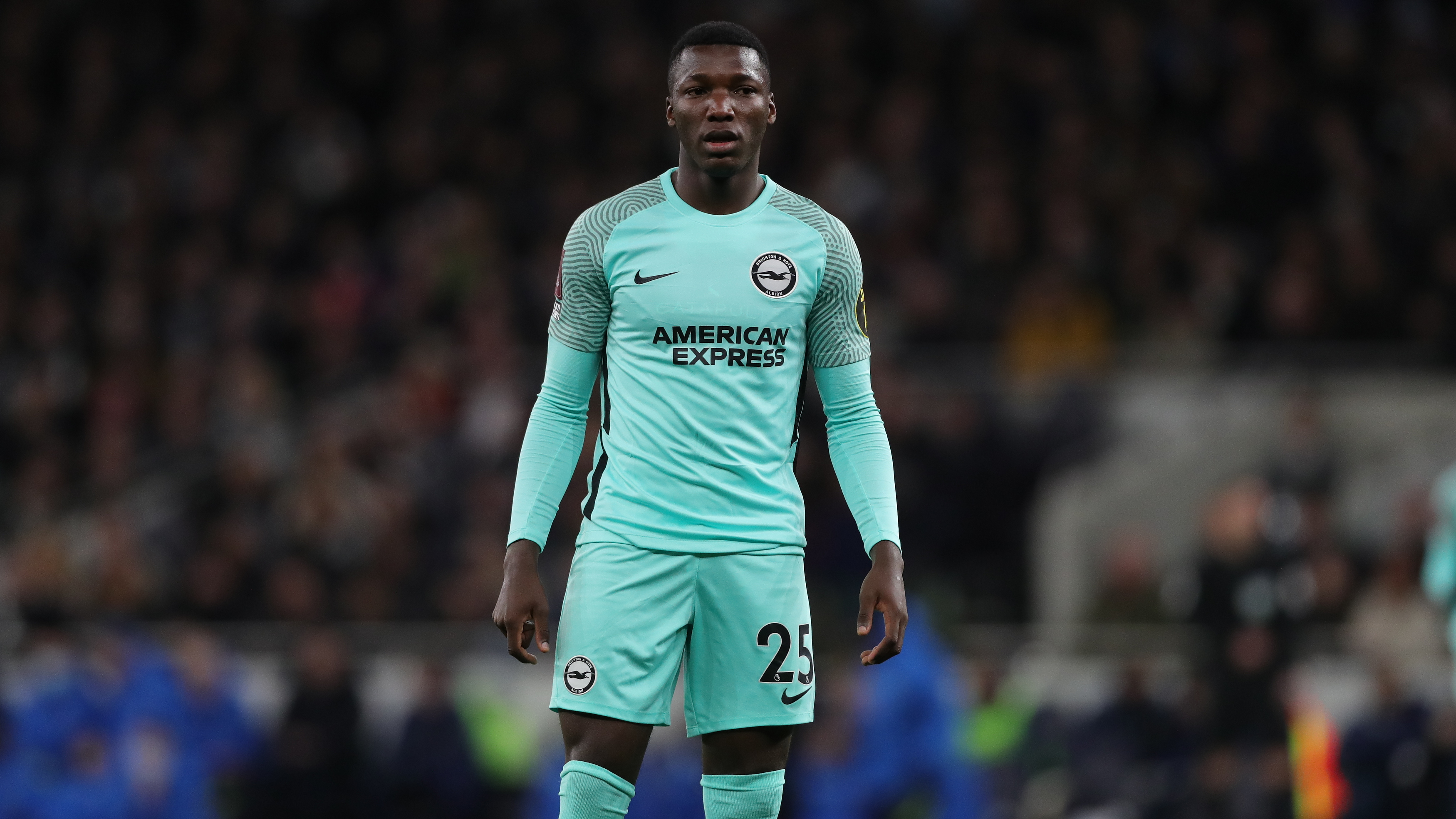 When Moises Caicedo sat down on the training ground to conduct his first full interview in English, he took it all in his stride. His fluency in the language is still in its infancy, as is his football here in this country, but he rose to the challenge wholeheartedly. As he does on the field. Here is a courageous, combative individual, but with a pleasant attitude. Traits that suggest he will go far in the game.

Putting pen to paper since Independiente del Valle just over a year ago, the Ecuadorian teenager has come to England to start a new life. A new country, a new language, a new culture and a new way to play, all against the backdrop of a global pandemic. And he did it leaving behind his family and friends. He was only 19 years old.

It was crazy because I was playing against Messi. It was a dream to be on the same field as him.

“Where I played for my old club, the city was three hours away from my house, so I lived with the academy players,” he recalled. “I used to live alone, away from my family, but of course it was more difficult for me.

“I remember those first days and weeks were tough. Everything was so different; the language, the people, the culture, but now I feel better – with my teammates, the city, even the weather! Of course, I still miss my family and friends and I hope they can come visit me soon. I can see them when I’m away with the national team and that’s really good, even if it’s just for a short time.

Moises’ maturity dictated that he was a regular in the Ecuadorian Serie A, making 23 appearances, before his move to Sussex. He was also rewarded with his first international appearance, in a World Cup qualifying loss to Argentina, in October 2020. The following month he scored the first goal in a 4-2 victory against Uruguay, becoming the first player born in the 21st century to score in a CONMEBOL World Cup qualifier.

“My debut against Argentina was amazing – in fact it was crazy for me because I was playing against Messi,” smiled Moises. “It was just a dream to be on the same pitch as him, to compete for the ball against him, but it all felt natural to me.

“At the start of the game, of course, I was nervous, considering it was my first game and against such strong opposition, but once I got my first touch, I felt good. We lost the part [Messi scoring the solitary goal] but we still did well, against a team that also had [Angel] Di Maria in the team.

“But we still have a chance to qualify. We’ve done very well so far and we have a lot of young players, so I’m sure we’ll get even stronger in the future.

It says a lot about Albion’s reach that we now have two Ecuadorian internationals in our ranks, the other being Jeremy Sarmiento.

“Jeremy has been good to have around. Obviously, he grew up in this country, so it makes me smile to hear him speak with a real English accent and then switch to Spanish. In fact, he helped me a lot when we flew to join the national team on the plane. The hostesses spoke English, so he helped me with food, safety instructions, things like that.

Like a decade earlier, there seems to be a growing Spanish-speaking influence around the club again: Jeremy, Bruno, Rob Sanchez, Marc Cucurella, Alexis Mac Allister, Steven Alzate… even Danny Welbeck is said to have uttered a strange word. around the team canteen! A big influence off the pitch, certainly, but also on the pitch when the boss is particularly difficult to understand.

“English boys speak so fast, especially when you’re on the pitch!” he smiled. “I’m learning to understand, learning new words, new phrases all the time, but it was so important to have Spanish speaking guys here to help me.

“If there’s something the coaches say I don’t understand then Bruno is there to help and it’s the same on the pitch with the other guys. I think now the COVID restrictions are easy and I can mix more in the city, visit restaurants and shops, my English will only improve, I also watch TV in English as much as possible because it helps me.

English was also the language of choice during Moises’ recent loan spell at Belgium’s top side Beerschot. He had made 12 appearances, scoring once, until he was recalled by the Seagulls last month in the absence of Yves Bissouma and Enock Mwepu. It was an experience he enjoyed and helped get him started on his return to Sussex.

“I was playing regularly and that was important,” he said of his time at the Antwerp club. “It has helped me with my fitness and it has also helped me retain my place in the national team. The football, however, is very different to the Premier League. It’s a good level but not as intense Football in England is more physical, it’s faster and the players are very strong, tall, fast and athletic.

“But I feel good to be back here now. When Graham called me and said he wanted me back, I felt very happy. Now that I’m back in the team , I feel comfortable, as if I belong here. It’s also good to get back to work with the coach and his staff because he likes to improve young players and every day I feel like I’m improving training hard, very intensive. I need it to adapt to the demands of the Premier League.

Back at home, Moises made his second appearance of the season for the Seagulls in the FA Cup defeat at Tottenham – having made his debut early in the campaign in the 2-0 Carabao Cup win at Cardiff. Yet another high profile situation he found himself in, but did himself justice in, having come on as a substitute for Solly March in the 61st minute.

“It was a good feeling to come and play at this stadium, which is the best in England,” he added. “Again, I felt nervous before going in, but once I started playing and took the ball, I forgot about the occasion, everything around me.

“It was about focusing on the game and I had good passing and ball recovery. It was a disappointing result for the team but it was a step forward for me. It was normal to be there, as if I were in my place.

Caicedo lined up in midfield alongside Yves Bissouma, another player who has been influential since stepping back in the building. Comparisons have been made between the two and he is happy to hear it.

“Although I’m not at his level yet and much younger, I like to think I’m a similar player in terms of the way I play. I can break the game and I can go forward, I can do both sides, although I see myself more as an offensive player.

“It’s great to have Yves to learn. He was always talking to me during the Tottenham game and I also like training with him. I learn so much from him and Adam Lallana is the same. He is there to help me and always has time to talk to me. I am lucky to have midfielders like Yves and Adam from whom I learn every day.

Moises was also delighted to get closer to Paul Pogba at Old Trafford last Tuesday night. The Frenchman was an idol growing up – along with fellow United player, compatriot Antonio Valencia – and so it was a special moment when the pair brushed shoulders at the ‘Theatre of Dreams’.

“As a midfielder, Pogba has always been my favorite player,” he revealed. “I also liked N’Golo Kante, for the defensive side, but Pogba was the player who always excited me, for the way he takes the ball and breaks forward.

“Manchester United have always been my team because of Pogba and, before that, Valencia. He was a winger, then a right-back, and was strong, fast and very smart. He was the perfect player for the Premier League and if I can continue and enjoy a career like him, then it will be a dream.”

Although these are only the first few days, the signs are most certainly promising. The youngster from Santo Domingo has already come a long way in a short time but he knows there is still a lot to do.

“I’ve only just started,” he pointed out. “I have a lot of time to learn and a lot more to show. I feel like I’m in the best place to do that, in an exciting team, with a great coach and staff. The fans haven’t seen me much yet. but as the months pass and I settle in more, hopefully I can show what I can do. These are exciting times for me.

A boost for bilingual education | News