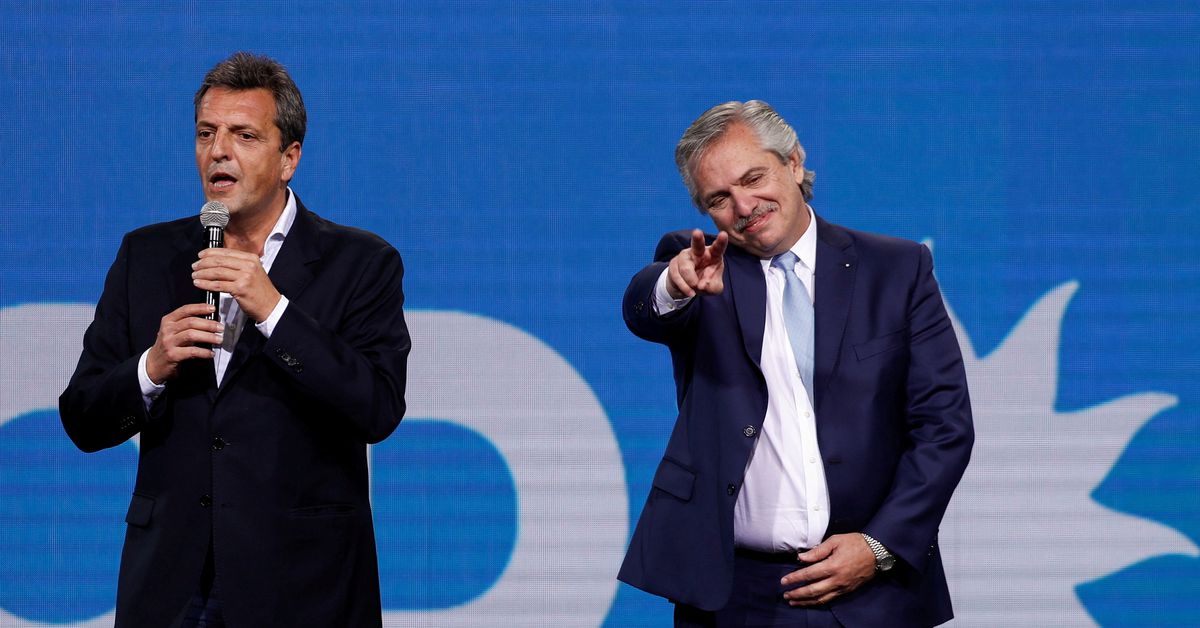 Argentinian Fernandez bets on the “superministry” to stop the economic bleeding

Sergio Massa, Speaker of the Chamber of Deputies, addresses the audience as Argentina’s President Alberto Fernandez gestures during an event after the midterm elections in Buenos Aires, Argentina November 14, 2021. REUTERS/ Agustin Marcarian/File Photo

BUENOS AIRES, July 28 (Reuters) – Argentine President Alberto Fernandez on Thursday launched his latest effort to tackle a struggling economy, calling on one of the ruling coalition’s most powerful figures to lead a new ” superministry” on the same day the central bank raised interest rates to 60%.

The changes indicate tensions between different wings of the centre-left ruling coalition over how to tackle the deepening price spiral for consumers, huge public debt obligations and the peso which has reached the historic lows last week.

Once Massa steps down from his leadership position in Congress, he will assume the newly created role, which is expected to happen after a special legislative session scheduled for next Tuesday.

The government announced Massa’s new job just hours after the central bank raised its benchmark Leliq interest rate by eight percentage points to 60%, in its seventh hike this year.

The move continues the monetary authority’s so far futile efforts to rein in soaring inflation, which analysts say could top 80% by the end of this year.

Ahead of Fernandez’s cabinet changes, the beleaguered peso currency strengthened by around 5% on the parallel black market, to trade at 311 pesos to the US dollar, according to private traders. Last week, the peso weakened to 350 per greenback.

Analysts offered mixed views on the president’s bid to turn the page on weeks of economic turbulence, citing lingering imbalances fueled by soaring consumer prices as well as an exchange rate differential between the parallel and tightly controlled official, which exceeded 150% this month.

“The policy response may well be characterized as a band-aid effort, lacking the consistency and scale required to stabilize the economy,” JP Morgan said in a research note after Massa’s appointment.

He added that a new economic management must be able to better coordinate political support for sound fiscal policies.

In what could be seen as a note of optimism, the bank’s Latin America researchers noted that the new minister with a significantly expanded portfolio “could provide that capacity for coordination, amplified by political acumen.”