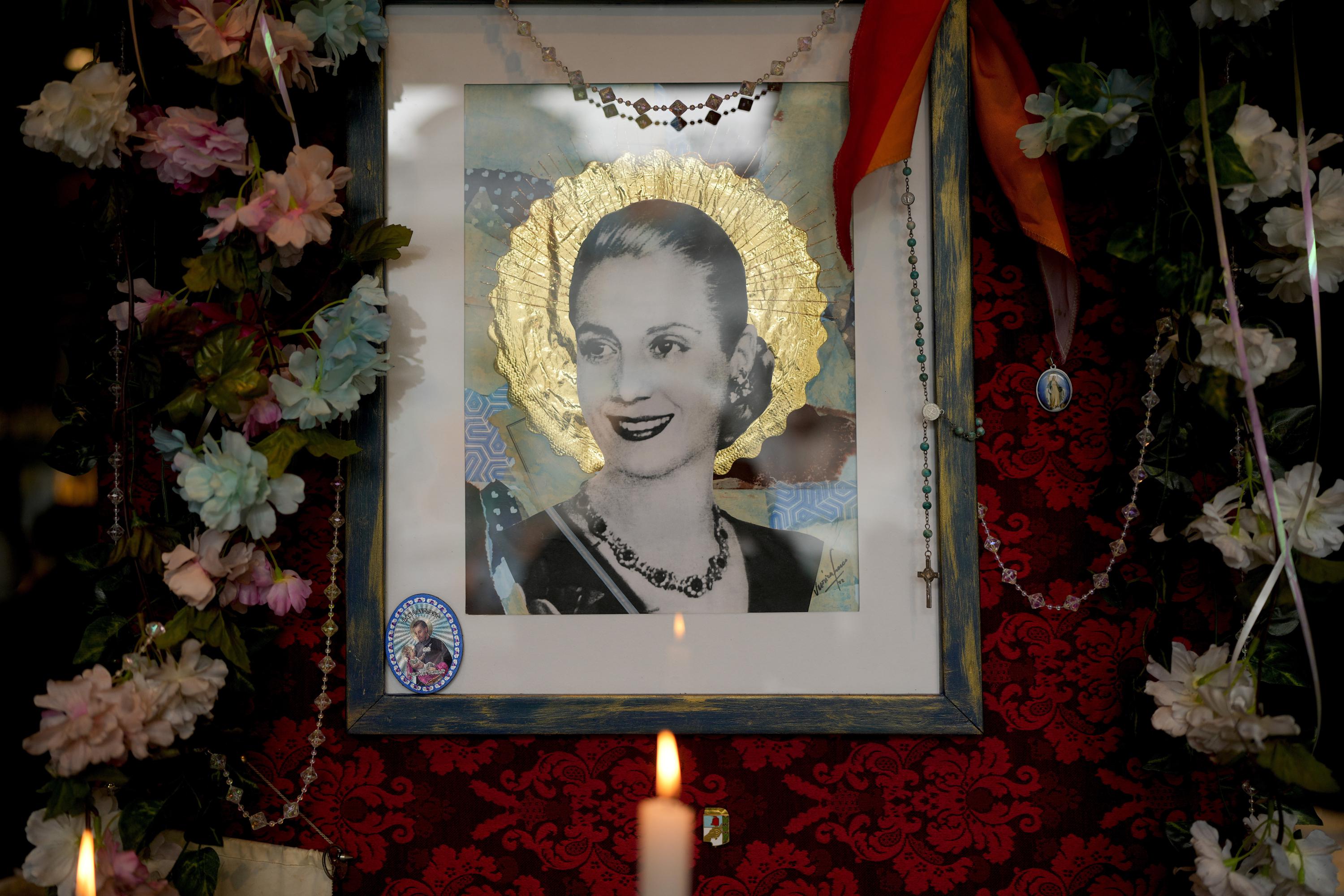 Argentines yearn for Evita, 70 years after her death

BUENOS AIRES (AP) — María Eva Noble says she is carrying on the legacy of her namesake as she works at a soup kitchen in a working-class neighborhood in Buenos Aires.

She is named after iconic Argentine first lady María Eva Duarte de Perón, better known as Eva Perón, or Evita, who died 70 years ago on Tuesday. The soup kitchen where Noble volunteers in the Flores neighborhood serves daily lunches to around 200 people and is run by an organization that also bears the late leader’s name.

Although not related to Eva Perón, Noble says, “I carry Evita in my DNA.” And she’s not the only one feeling this.

Seven decades after her death, Evita continues to stir passions in Argentina as her supporters believe her image as a champion of the poor is more relevant than ever at a time of rising inequality and poverty as the economy stagnates amid of galloping inflation.

Evita has been the subject of countless books, movies, TV shows and even a Broadway musical, but for some of her oldest and most ardent followers, the connection to the actress-turned-political leader is much more personal.

Juana Marta Barro was one of dozens of people who lined up on Tuesday morning to lay flowers and pay their respects at Evita’s grave, located in the Recoleta district of the Argentine capital.

With tears in her eyes, Barro, 84, the daughter of a cleaner, recalled how her life in the northern province of Tucumán improved after Evita entered the political scene, and she suddenly received better shoes and a school uniform.

“It was thanks to her that I got my first backpack,” said Barro, who still remembers the excitement of seeing Evita pass through her town on a train. “She is a torch that shines in my heart.”

Evita was born in a modest home in Los Toldos, a small rural town about 300 kilometers (186 miles) from the capital, where she moved at the age of 15 to pursue her dream of becoming an actress. A decade later, she met Juan Domingo Perón, a military officer who was a government official.

Evita was at her side when Perón won the 1946 presidential election and played an unprecedented role as a powerful first lady, placing herself at the forefront of women’s rights causes, including suffrage which was approved a year later and the creation of a foundation to help workers and the poor.

As much as Evita was loved, she was also hated by many of the rich and powerful in the country who were suspicious of her growing popularity and influence.

Her time in the spotlight was intense but brief as she died of cervical cancer aged 33, sending an outpouring of grief through the streets as the South American country mourned.

Perón ended up being elected president twice more and was the founder of a political movement – Peronism – which dominates Argentine political life to this day, with many leaders with disparate ideological views claiming loyalty to the former general.

“Perón was respected, he was obeyed – you agreed with what he said or not. But Evita was loved or hated and ended up bringing a strong dose of emotion to Peronism,” said Felipe Pigna, a historian who has written extensively about the former first lady.

For some, that emotion has survived.

María Eva Sapire joined nearly 100 others a day before the anniversary of Evita’s death to dress like her in a pageant that paid tribute to the former first lady.

Sapire was named after Evita and now she talks about her with her own daughter.

“When you listen to his speeches, it’s amazing how so many things still fit so many years later,” Sapire said.

Others who came to admire Evita later in life often say that it was precisely the feeling that she was advanced for her time in many areas, especially women’s rights, that led them to join her legions. of fans.

“Young people in particular see a rebel in Evita, a figure who did not lower her head or give up” and ended up dying “young and beautiful”, which contributed to the construction of a “pop icon”, Pigna said.

“Eva is a bewitching character,” said Alejandro Maci, director of the new “Santa Evita” series which will premiere Tuesday on Disney streaming services and is based on a 1995 novel by Argentine writer Tomás Eloy Martínez.

Perón and Evita continue to face criticism both in Argentina and abroad. Some, for example, say that Evita used state money to carry out what she described as charitable works to build up an image of herself as a saint and help her husband gain popularity. . Others also claim that the couple received money from the Nazis to help war criminals hide in Argentina after World War II.

Cristina Alvarez Rodríguez, a great-niece of Evita who is now a minister in the provincial government of Buenos Aires, said she was particularly moved by the number of “very young girls who have tattooed Evita on their skin” and now “have her as a wife”. guiding light.”

For some, the current government of President Alberto Fernández, who describes himself as a Peronist, has moved away from these principles.

“The Argentine people feel betrayed. Peronism never starved people, and that’s what’s happening now,” said Mateo Nieto, who has photos of Perón and Evita at his pizzeria in the town of Posadas, near the border with Paraguay. .

Nieto said “the government in power calls itself Peronist, but that’s really not Peronism.”

“We really miss someone like Evita, it would be great to have a leader like her at this time,” he said.

Maci, the director, sees Evita as an “interesting metaphor” for thinking about the kind of country Argentines want in a time of growing poverty and inequality.

“This woman offered a society with greater mobility, which is exactly what Argentina does not have at the moment. She lacks any sort of social mobility, and if she has any, it’s down,” he said.

GSIS provides emergency loans to members affected by the earthquake