On May 19, after a month of hearing testimony in Chaco and Buenos Aires, Federal Judge Zunilda Niremperger read her sentence – simultaneously translated into the Qom and Moqoit languages ​​- on the Napalpí massacre. “The state attacked the communities as part of an organized plan before,” she said, explaining why the court determined that what happened in Napalpí was a crime against humanity. “It was an organized extermination.”

This trial was unusual: it took place 97 years and 10 months after the Napalpí massacrebut eventually the Argentine state recognized the brutal attack on the Qom and Moqoit indigenous communities in 1924.

The massacre that occurred on July 19, 1924 was part of what experts believe was a systemic plan to eliminate and suppress indigenous communities during the building of the modern nation of Argentina. Not much is known about the events of the massacre because, until recently, the state did not investigate or acknowledge the event.

The Napalpí was one of the four indigenous “reductions”“ created by the state to discipline and control the communities defeated during the military invasion of the Chaco region. The term “reduction,” as these spaces were called, indicates their purpose: reduce means to shrink, to decrease. These lands were essentially concentration camps, similar to those created by the Spanish during the Cuban War of Independence. The Napalpí community lived under a strict regime created in 1911, in which they were forced to work in the cotton fields. Children did not go to school and families could not leave the area.

Fernando Centeno, then governor of the Chaco region, prohibited the inhabitants of Napalpí from using their income outside the reduction and forced them to pay for the transportation of their crops and even their work clothes. Days before the massacre, the community organized to protest their unfair working conditions and demand better wages. In response, the government ordered the attacks which were carried out by local police and the military, launching a vicious ambush by air and ground and killing an estimated 500 Moqoit and Qom.

Recent investigations of government records from those years have shown that the massacre was carefully coordinated and planned, with weeks of intelligence and coordination leading up to the events of July 19.

Piecing together the history of the trial has been difficult, given that no investigation was opened directly after the massacre and the testimonies of survivors remained unheard for nearly a century. But, thanks to the efforts of their descendants, historians and sociologists, and with the support of the current Chaco government, a trial for the truth was opened in April of this year. The purpose of the trial was not to condemn, since those directly responsible for the massacre are already dead, but to validate the voices of the communities and defenders of Napalpí and to recognize the crimes against humanity that were inflicted on their ancestors. In Argentina, a country that prides itself on being a pioneer in trials acknowledging its violent history – particularly linked to the junta dictatorship – the state owed indigenous communities the gesture of acknowledging their history.

Reconstructing the massacre through testimony

In her testimony, Rosa Grillo recalls how, on July 19, 1924, hundreds of men, women and children were surrounded by earth, attacked from the air and brutally murdered. Airplanes approached the area, dropping candy and food on the ground as a decoy. Once people came out to get the food, the shooting started.

Grillo, a 114-year-old woman, is one of the very few survivors of Napalpí. His testimony which was shown during the trial was taken from a video shot in 2018 by Qom researcher Juan Chico during his investigation into the massacre. His story was key in helping the Napalpí case come to trial.

“No one has ever spoken about what happened until now,” she said. “[That day] was very sad, because they killed my father. My mom and grandpa ran through the woods yelling at us to run too.

During the trial, historian Nicolás Iñigo Carrera explained the massacre in the context of Argentina’s emergence as a nation-state and its entry into the world market in 1880. The goal of coercing the Chaco communities to cuts was to create cheap labor. which would encourage companies to settle in the region. The Centeno government, Carrera explained, viewed indigenous peoples as militant opponents. During the trials, he shared evidence from the archives, highlighting how authorities at the time called indigenous communities “subversive,” the same classification the military would use against militants in the 1970s.

Other testimonies used archival documents to claim that the attack had been carefully planned, showing how police and military forces had been sent nearby two days before. Proving this helped support the assertion of the event as a crime against humanity, as later decreed by Judge Niremperger’s sentence. In her decision, she recognizes the responsibility of the Argentine state in the massacre and obliges the state to acknowledge it publicly. The decision also demands that the state implement a series of public policy reparations, including training the army on the rights of indigenous communities, the creation of a museum and a memorial site in Napalpí, the incorporation of events into the national history curriculum and the return of used remains. for investigation to their descendants. As part of recognizing the events and maintaining a policy of remembrance, the truth trials were broadcast on national television. 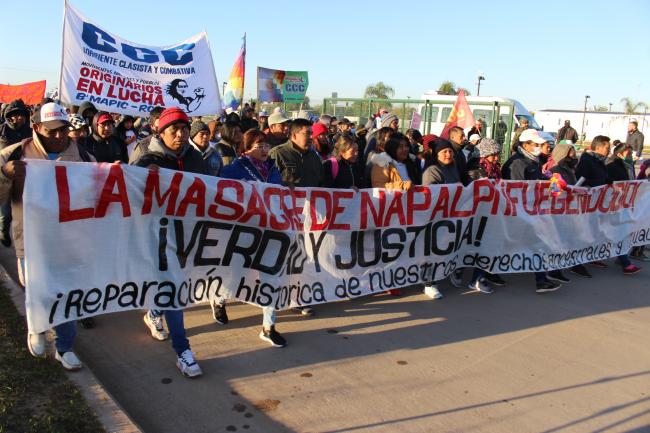 Although the verdict is a significant victory, experts believe real justice will require a more sweeping shift in public policy. According to sociologist and researcher Marcelo Musante, many government institutions in Argentina were created at the end of the 19th century and still reproduce racism and violence against indigenous communities.

“The Argentine state was founded in the indigenous genocide: it’s in public discourse, it’s in school education,” he said. In contemporary Argentina, relations between the state and indigenous communities continue to be strained and violent. Land ownership and the right to access their ancestral territories is one of the main conflicts, such as in Patagonia where private companies occupy the land and displace the remaining communities in the region.

Argentina has laws to protect its indigenous communities, such as the Indigenous Communities Territorial Survey Law. The law obliges the State to respond to the territorial emergency in which the indigenous communities live by preventing evictions and carrying out an in-depth census of the populations inhabiting these lands. However, the law, passed in 2016, has still not been implemented.

As communities in the Chaco celebrate the victory of Napalpí’s sentence after decades of invisibility, many hope this will be the turning point in how authorities deal with the grievances of communities that have resisted his violence for centuries.

“I hope this trial is not the end, but the beginning of a period of reflection on the part of the state,” Musante said. “I hope he opens up a debate about what is happening with displacement and encourages the authorities to enforce existing laws.”

Lucie Cholakian Herrera is a freelance journalist based in Buenos Aires. She covers human rights, politics and gender in Latin America.