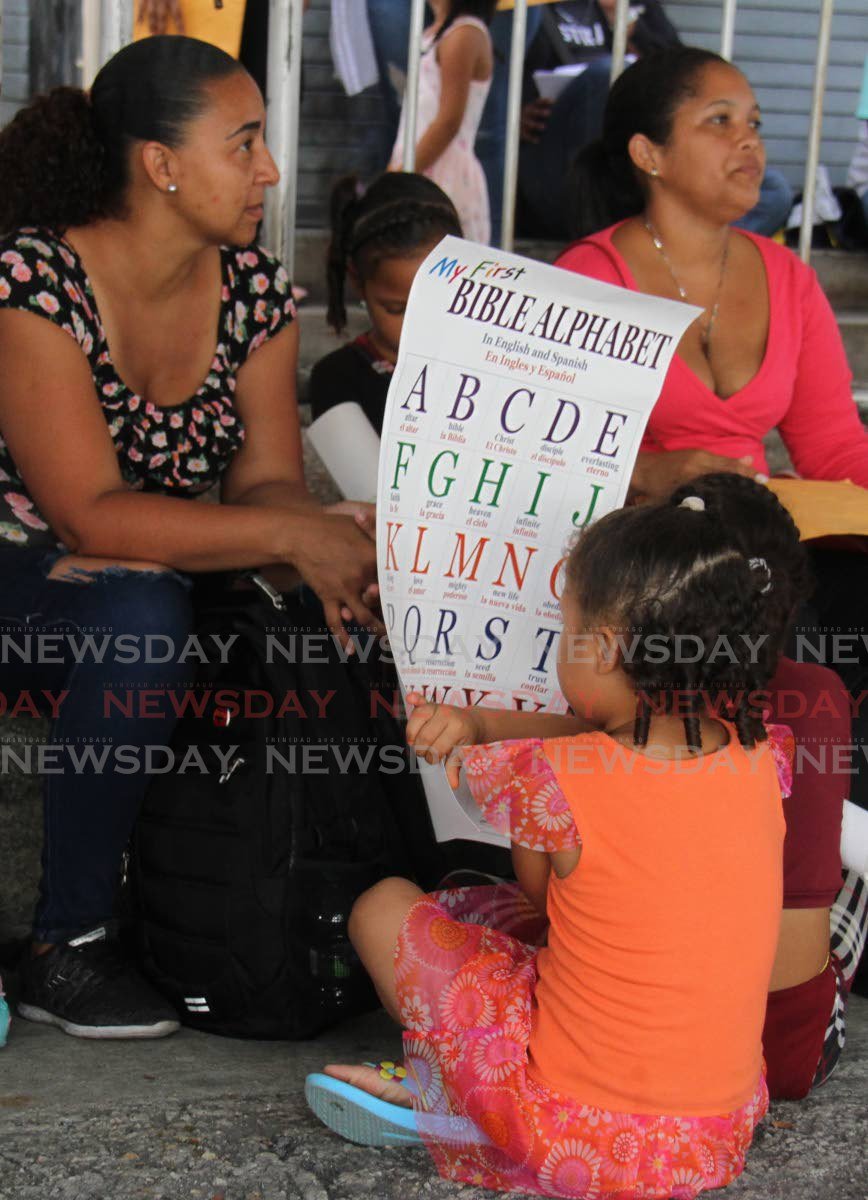 Of the 16,523 registered Venezuelans, at least 4,400 are children who are supposed to be in school.

In the past two years, none of the migrant children have been able to access formal education in private and public schools.

Association of Faith-Based Education Councils President Sharon Mangroo said that in 2019 the government approached the organization to help prepare migrant students to enter the school system.

Mangroo said the Catholic School Board has prepared at least 100 Venezuelan children for entry to primary school and is awaiting approval.

â€œSo we identified them, and then we did the rest of the things we needed to do. We made sure that they were children whose parents had registration cards and that they had enough English not to. not disturb the school. “

She added that teachers have also been trained to teach English as a second language so that students and teachers are prepared.

Mangroo said it was even more difficult to get migrants into secondary schools due to demand for places among local children. She underlined that none of the migrants are “in school” because it is illegal but access some form of formal schooling.

â€œEvery child in the area would love to go to one of the high schools. So no, we didn’t plan to have the kids there at all, not at the day school. We have made premises available for extracurricular activities for these children.

She said that before the schools closed, at least three schools had been made available to help migrant children with their secondary education after school.

UNHCR, in a statement to the Sunday Newsday, reaffirmed that education is a basic human right, “it doesn’t matter who someone is or where they come from”.

â€œBeing able to go to school gives children a chance to do more than just learn numeracy and literacy, but also essential social and life skills. In addition to the efforts supported by UNHCR, many organizations and entities have tried to provide means of informal educational engagement for children. However, these temporary interventions cannot replace the opportunity to formally attend school and engage in the holistic learning that the school environment provides.

The UNHCR statement adds: â€œInvesting in strengthening the local education system, promoting the inclusion and integration of refugees and migrants, and recognizing international certificates and diplomas, rather than setting up parallel structures, cannot that be beneficial to the overall educational infrastructure of the country.

According to UNHCR’s June report on Venezuelan migrants in the Caribbean, the Equal Place program has 1,235 students and 1,022 participate regularly. The report added that 140 students were registered to join physical classes and were due to start in September, but with schools not opening for all students, that plan was postponed. Sunday Newsday learned that no migrant child had obtained a student permit allowing them to be enrolled in school.

The report said: â€œAlthough Caribbean countries are bound by international legal obligations to provide education for all children, in practice, access to formal and accredited education remains a challenge.

Even in countries where official access is granted for public primary and secondary education, Venezuelan children and youth face administrative, financial, linguistic and cultural barriers. Access to higher education and cases of xenophobia and bullying at school also remain difficult. “

The report says that in Aruba and CuraÃ§ao, migrant children have access to primary and secondary schools but are required to provide compulsory school insurance, with Aruba requiring a “local guarantor”. In both islands, lessons are taught in Dutch, Papiamento and English.

There are 46 refugees and asylum seekers in the TT between the ages of 17 and 20 who have been nominated to take college-level courses online, according to the report. The program is a collaborative effort between EdX, an online education platform built by Harvard and MIT, and Hamad Bin Khalifa University (HBKU) in Qatar. Refugees and asylum seekers have also received vouchers to take online courses that can count towards micro-licenses and micro-masters.

In the statement, UNHCR said it has participated in and supported many educational initiatives with UNICEF, the Living Water Community and the Catholic Education Council, to help refugee, migrant and local children continue their education. despite the challenges of distance learning. UNHCR said it has good technical relations with the Ministry of Education and stands ready to support the government with any technical or capacity building assistance, including language training, translations, additional classrooms, l equipment and furniture.

â€œGlobally, UNHCR advocates for the inclusion of refugee children in public education and other social protection systems. We hope this can happen in the TT as well, as in other Caribbean and Latin American countries, including Guyana, the Dominican Republic and Aruba. Education for all is imperative for the future. “

Mangroo said they were ready and patiently awaiting national security approval. In March, 13,800 Venezuelans applied to be re-registered after the 2019 registration expired. Those who fail to re-register will face deportation, like all illegal immigrants.

Mangroo added: â€œGuyana has 740 children in its public schools. I don’t know why we can’t get ours. We are all ready, we are ready to welcome them, once we get the approval, but we cannot move because it is out of the law.